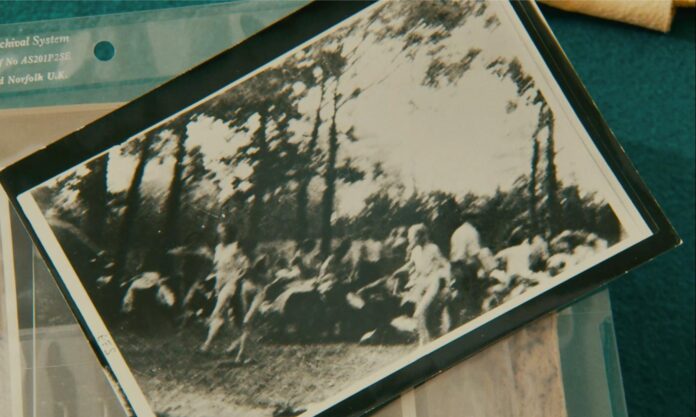 As the documentary film From Where They Stood opens, director Christophe Cognet and his team sift through white fragments on the surface of burial pits near crematoria in the extermination camp of Auschwitz-Birkenau in Poland. The tiny shards are human bones that were not fully cremated.

The world of Nazi concentration camps was barely seen by outsiders until those camps were liberated. By that point, the Nazis themselves had destroyed the mechanics of extermination and killed most of the prisoners deported there.

In meticulous detail, Cognet examines the rare photographs taken by prisoners in those camps, the ways in which those images were made and how the photos survived. That project is even more painstaking in his book Éclats (Editions du Seuil, 2019), whose title can be translated into English as bursts, flashes, splinters or shards.

“In those places dedicated to the negation of things human, regaining the control of one’s image was an act of resistance. All these photographs have that in common,” Cognet says by telephone from Paris. All made in secret, some pictures were taken by prisoners assigned to photography workshops in Buchenwald, mostly to make death certificates. Some are improbably defiant images of smiling young women at Ravensbruck who endured torturous medical experiments. Their stylish clothes and the camera that made the image came from new arrivals to the camp.

Others show prisoners relaxing on a Sunday in Buchenwald, with a crematorium’s smokestack in the background. Cognet notes that the few SS officers who saw those pictures wanted them retouched to avoid suggesting any gentle treatment of prisoners. “And then prisoners who survived also wanted the same images retouched, to avoid giving the impression that the camp was not so bad,” he says, citing the smokestack as evidence of the opposite.

The film’s most poignant and shocking images capture moments before and after groups of women were gassed at Auschwitz-Birkenau. The camera was held by a member of the Sonderkommando, prisoners who led other prisoners to the gas chambers and then burned their bodies. A photograph shows them walking among corpses of the newly dead to be burned in the open air.

“You see the act of resistance there in the fact that the photographs are tilted, pulled out from those scenes, and taken in the most dangerous of circumstances,” says Cognet. “We assume that a picture was taken from behind a tree or from inside the gas chamber. The resistance is in the very form of the photograph.”

Cognet says he was wary of producing a film and a book on the photographs after he completed Because I Was a Painter (2013), a film about artists and the art they made in the camps. Drawings, he says, could be made from memory, but photographs required the physical presence of the person making the image.

The French title of his new film, À Pas Aveugle (roughly “Walking Blind”) was inspired by the translation of a novel in Yiddish by Leyb Rochman, a survivor in post-war Poland, in the ruins of what had been a Jewish world. Some of these photographs have been seen and exhibited before, and four images from Birkenau inspired the 2003 book of reflections, Images Malgré Tout (“Images in Spite of Everything”), by the French art historian Georges Didi-Huberman.

Cognet’s goal was to exhume facts along with the bone fragments. To learn about the photographs, he says, it was crucial to move beyond their heart-stopping and paralysing effect, to learn where the pictures were taken, to identify the subjects and the photographers, and to show how the smuggled cameras captured those images.

“We need to understand the act of taking the photographs, to see physically how this was accomplished, and then to look at them and describe them. The third step was to work with historians to understand the context of these images,” he says. “Without any of the three, you won’t understand them. My film and my book are an invitation for viewers and readers to do this work with me.”

At the sites where pictures were taken, where former camps are often empty places (filled with tourists by day), Cognet superimposes transparent photographs of the same site made by prisoners there. His camera pans slowly across mute landscapes at the camps as Claude Lanzmann did in his nine-hour epic film Shoah (1985).

“I’m influenced by Tarkovsky, by his way of showing a landscape, by the German portraitist August Sander and by the [French-born] photographer Antoine d’Agata,” Cognet says. “All my work here is about finding a new perception that takes us beyond what we have from the images made by the Allied armies and from those made by the Nazis themselves, and to get the point of view of the deported. These pictures, put in their contexts and in the places where they were taken, give us an absolutely unique perception of what the camps were. Whether or not they are art, finding that unique perception is the mission of art.”