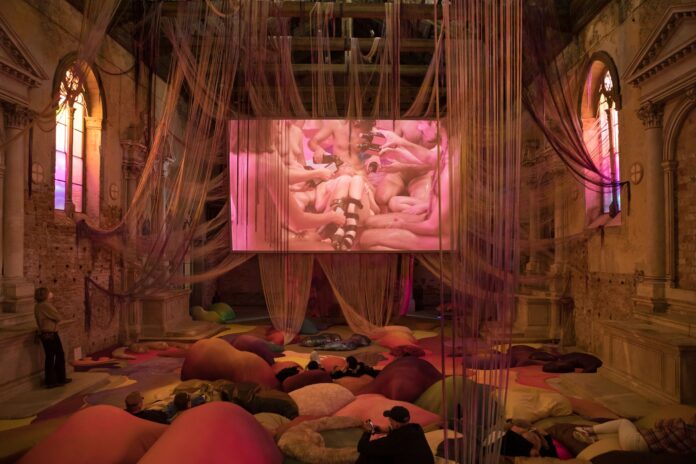 If you need a break from the go go go of the Venice Biennale, the Dutch Pavilion—which is outside the Giardini this year—offers a sensual respite for weary heads and bodies. melanie bonajo’s When the body says yes (2022) video installation fills the deconsecrated Chiesetta della Misericordia with soft globular furnishings in pastel colours—pinks, oranges, purples—and a film projected onto a large screen.

The film features bodies of all shapes and sizes in several states of undress, writhing around, touching and feeling each other, with voiceovers from participants explaining their relationships to different type of intimacy, from a childhood hug to sexual encounters. In one scene revellers rave on a tiny stage and several hands repeatedly reach for a green-skirted bottom before its owner spins around shouting “no”.

bonajo’s work explores issues of consent and proposes new ways of having physical relationships with others, where intimacy and touch are not just preludes to sex but intrinsically valuable in and of themselves. Lie back and enjoy the ride.

A side note: It also worth popping into the nearby Scuola Grande della Misericordia, where recent works made in response to the Russian war on Ukraine have been brought together, including the incredibly moving diary entries of the photographer Yevgenia Belorusets and huge paintings by Lesia Khomenko of soldier volunteers serving with her husband.

Take one of the world’s most grandiloquent artists, throw in an historic Italian building and add a curious art world crowd—the result is Anselm Kiefer’s essential paintings show at the Palazzo Ducale in St Mark’s Square (until 29 October), which is drawing adoring Biennale crowds. Kiefer has taken over the immense Sala dello Scrutinio with his own towering take on Venice. Consisting of a series of paintings inspired by Italian masters Tintoretto and Andrea Vicentino, the enormous works incorporate zinc, lead, real gold, clothes and parts of shopping trolleys.

Other unusual appendages affixed to the vast charred canvases include the empty casket of St Mark, Venice’s patron saint, forged out of zinc and presiding over a barren landscape. Additional disparate items floating in Kiefer’s universe include spare shoes and a ladder that apparently leads to purgatory. The works seem to take on a different dimension against the backdrop of the war in Ukraine, bringing an element of foreboding to the art world merry-go-round spinning around the City of Bridges this week. Addressing rumours that the works might be destroyed, Kiefer said (rather obtusely) on site that “nothing is ever finished”.

What should an artist do when shorn of their art? Improvise. ORTA Collective were chosen to represent Kazakhstan for the Central Asian country’s first-ever pavilion at the Venice Biennale. But just days before the opening of the Venice Biennale, the collective learnt their combined years of work was stuck in transit at the Georgian border. There was no hope of arrival in time for the vernissage; another consequence of the Ukrainian war.

The collective first formed in Almaty in 2015, inspired by the legacy of Sergey Kalmykov, the unheralded Russian avant-garde artist who tragically died in a psychiatric unit in the same city back in 1967. This week, the collective planned to show the results of seven years of continuous work together in Kalmykov’s lineage, spanning embroidery, painting, video and digital art.

Alexandra Morozova and Rustem Begenov, the husband and wife at the centre of the collective, admit to succumbing to a deep depression in the days before the opening. They finally roused themselves and got to work, filling the space with materials that they could find—cardboard, plastic, tinfoil, sellotape and glue. They decided, off the cuff, to use their makeshift “temple” for a series of performances that they call Spectacular Experiments.

There’s no denying it: the performance ORTA Collective are offering visitors of the Venice Bienalle resembles something you might find at the outer fringes of Glastonbury. One caustic wit compared the experience to an episode of Neil Buchanan’s British 1990s children’s TV show Art Attack.

But ORTA Collective are testament to the power of spirit in the face of adversity. They still, somehow, managed to conjure a transformative experience. For 20 minutes, wrapped in cardboard and with a ball of tinfoil sellotaped to your head, you’re taken from Venice to an invented place of their choosing.

Headline works by Anish Kapoor and Anselm Kiefer loom in their historic chambers close by; intense, monumental and not a little self-reverent. Here, in this cardboard cocoon, is perhaps a needed reminder that art can leave you feeling a little lighter too.

Lagareh—The Last Born, the deeply affecting film at the heart of Alberta Whittle’s show in a former shipbuilding complex, could be described as a kind of tapestry. It is a collage of alternately disturbing and uplifting images and sounds that complement the actual weaving hanging in the adjacent gallery space. Or it is a slipstream, shot through with watery imagery that binds painful—and still-hidden—histories of the transatlantic slave trade together with Black British experience today.

Sequences were filmed at Bunce Island in the Sierra Leone River, where Britain’s Royal Africa Company held tens of thousands of captive Africans before they were sold and shipped to plantations in the West Indies and North America. Other scenes place Black women in the grand Ayrshire estate of Richard Oswald, the 18th-century Scotsman who was the principal owner of Bunce Island.

Whittle’s skill is to expose the ripple effects of past violence in the present, splicing between mobile phone footage of a young Black man being arrested in a busy city centre and the anguished face of the statue of a Moor in Venice’s Santa Maria Gloriosa dei Frari church. As an intertitle states, “Prisons are the new plantations.”

The film pays particular homage to Sheku Bayoh, who died in 2015 after being restrained by Scottish police (a public inquiry is ongoing). But it also proposes an exorcism of grief through love and care, with the artist’s rich voice intoning a poem to her African ancestors, and another chapter focusing on a couple’s hopes for their unborn baby. Whittle closes with a simple and powerful act of remembrance: reciting the names of the many victims of police brutality and reminding us that each one was someone’s baby once.

Fondazione In Between Art Film

Almost 500 years ago, the Santa Maria dei Derelitti church in Castello was filled with the harmonic voices of disabled and orphaned Venetian children. Today, the church is filled with the mournful braying of a lonesome donkey, his eyes staring from a video installation that stretches, stretches and stretches again—from one side of the consecrated church to the other.

Walk through a rear passageway and you emerge into the ruins of what was once a hospital for orphaned and disabled children who sung together in a choir. Today, the hospital has been transformed—quite brilliantly—into the setting for eight video works, most of them made by emerging artists near the start of their careers.

It is a truly global inquiry: we become immersed into the lives of exhausted Nigerian tin-miners; we are forced to consider the future of Afghanistan, alongside Kabul’s residents, on the night the Taliban retook the city; we are flung into the conversations of a homeless community living in a park in Brazil; and we are mercilessly taken into the surgery room at a zoo as vets battle to save the lives of anteaters, otters, wolves, owls and capybaras—all of whom have met violence at the hands of humans.

Each film is worthy of its own feature. But special mention must go to Emilija Škarnulytė, the 35-year-old Lithuanian artist who plunges us 4km underwater, deep into a dark and shadowy trench close to the Pacific seamounts of Costa Rica. Škarnulytė has created a dreamscape; both nightmarish and visionary, terrifying and beautiful, hallucinatory and shockingly real.

Just when you think you know Surrealism, there is a fresh angle to approach the art movement that began life in 1920s Paris but spread far and wide throughout the 20th century. The Peggy Guggenheim Collection’s dense and scholarly show (until 26 September) explores the strangely overlooked influence of magic and the occult on Surrealist artists such as Max Ernst, Leonora Carrington and Yves Tanguy, particularly after the global cataclysm of the Second World War. Alongside the famous names and familiar images are some surprises, too, such as Enrico Donati’s kitschy Evil Eye sculpture, a fetish object that stands at the entrance to the exhibition.

The detour across town is worth it alone for the red room devoted to Carrington’s infinitely detailed alchemical paintings, four of which normally reside in private collections. It is a full immersion into her Bosch-like visions of sorcerers, hybrid creatures and inscrutable symbols—a counterpoint to a Biennale named after her book of reputedly creepy children’s stories, The Milk of Dreams.

The Guggenheim show is especially strong on the hitherto underappreciated women of Surrealism: Remedios Varo, Leonor Fini and Dorothea Tanning, along with Carrington. Their fevered imaginations still appear radical today, earning them all a place in Cecilia Alemani’s women-centred main exhibition for this year’s Biennale.

What I Buy and Why: Collector Dede Wilsey on Why She Prefers to Hang Her Kandinsky Sideways and How She Helps Museums Acquire Art

Is It Immoral to Buy Work Directly Out of a Young Artist’s Studio? Here’s What a Trusted Art Advisor Has to Say