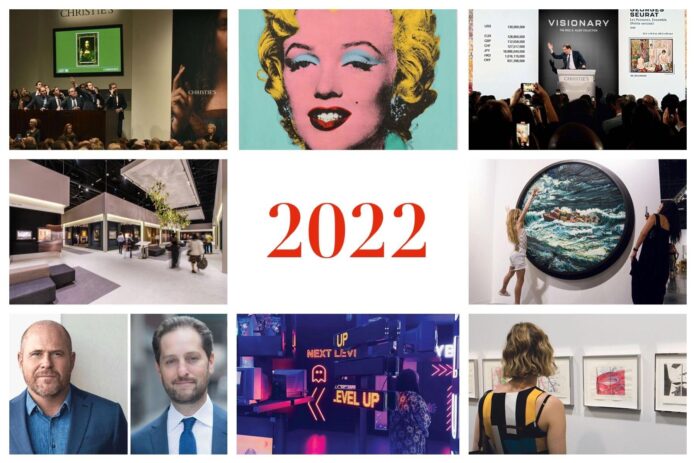 Art fairs back on track

This year saw much of the art world attempt a return to “post-pandemic” normality, with major fairs such as Art Basel and Frieze London back in their regular slots and with no social distancing measures.

Others like Expo Chicago and Tefaf Maastricht held their first editions since the pandemic. The latter was also the site of an audacious daylight robbery, in which several men—at least one of whom appeared to be armed—smashed a jewellery stand and made off with some of its contents.

Change abounded in the leadership of these events too, with both Victoria Siddall and Marc Spiegler stepping down this year as global directors of Frieze and Art Basel, respectively. While neither pointed to the pandemic as reasons for leaving (both helmed their brands for more than a decade), their departures signal that sands are shifting. Spiegler, who is succeeded by the former Art Basel Americas director Noah Horowitz fresh from a year-long stint at Sotheby’s, says that the skill set required of a fair director is different and broader than it was before.

Indeed, the growing trend towards blurred boundaries and industry consolidation only increased this year, with Sotheby’s launching a direct-from-artist studio primary market sales platform. Meanwhile, Bonhams continued to hoover up regional auction houses, and commercial galleries like David Zwirner and Perrotin strengthened their secondary market arms. In this context it is no wonder that the unfounded rumours of LVMH’s Gagosian acquisition seemed more inevitable than inconceivable.

Meanwhile, buzzing art weeks in Seoul and Tokyo added further industry speculation as to which East Asian city will take Hong Kong’s position as the region’s dominant art hub. Hong Kong’s position looks increasingly weakened, especially in light of a cooling auction market imperilled by strict lockdown measures, both in Hong Kong and on the mainland.

Single-owner sales to the fore

Western auction houses however reported bumper years—although some achieved this through a more creative definition of what constitutes art and luxury goods. These numbers were also shored up by heavily guaranteed single-owner collections, most notably that of Microsoft founder Paul G. Allen, which made a record-breaking $1.6bn at Christie’s for undisclosed philanthropic causes.

Other prominent collections offered this year included the second half of the acrimoniously divorced Macklowes, and those of the former Whitney Museum chairman David Solinger and the Hong Kong businessman Joseph Hotung.

Individual works also made records, with Warhol’s Shot Sage Blue Marilyn (1964) becoming the most expensive from the 20th century to sell at auction, fetching $195m at Christie’s New York, although that was under its $200m estimate.

On the fifth anniversary of the world record sale of the Saudi Salvator Mundi we looked at the state of scholarly debate on the picture, its provenance, and its whereabouts.

An end to the bull market?

But these headline figures likely belie the real situation, and voices from within the industry increasingly speak of an imminent end to a bull market that seems impervious to pandemics, wars, spiking interest and inflation rates and other global tumult. This could certainly be felt at Art Basel in Miami Beach, where buyers appeared more cautious than in years previous.

Are we in NFT winter?

Miami also symbolised the death knell of one of 2021’s favourite buzzwords: NFTs. With trade down an astonishing 98%, many former crypto evangelists are retreating from the blockchain-based art trade, which in turn is threatening the very artist resale rights that were touted as a key benefit of the NFT smart contracts. Of course, die-hard fans will say the crash was to be expected and that 2023 will see the medium rise again. And as this turbulent year can attest, stranger things have happened.

London dealer cleared over negligent sale of a Chardin painting