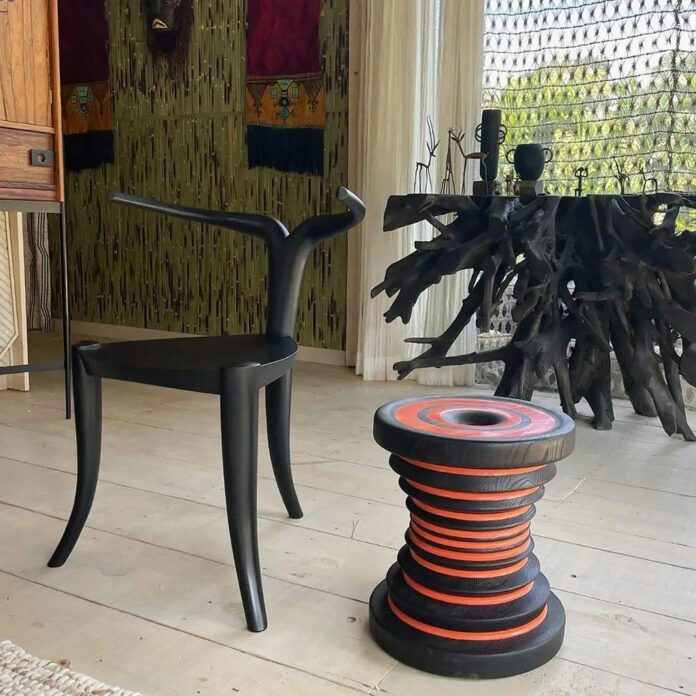 A few years ago, to prepare for her work on Marvel’s Black Panther, production designer Hannah Beachler famously compiled a 515-page visual manual detailing the lore, landscapes, and scientific advancements of Wakanda, the fictional African nation where the 2018 film was set.

That handbook would go on to guide her design decisions as she developed Wakanda’s cinematic look and feel—abundant in the colors and textures of African tradition, yet sleekly futuristic with a technological edge.

The film’s sequel, Black Panther: Wakanda Forever, which premiered in November, continues to bear Beachler’s mark. While designs cues were taken from the 2016 run of Black Panther comics (authored by Ta-Nehisi Coates and illustrated by Brian Stelfreeze), the aesthetics of Afrofuturism and Afro-punk, the architectural designs by Zaha Hadid, and the cultures of Sub-Saharan Africa remain key and eye-catching references.

Amid that vibrantly dressed set, Jomo Tariku’s furnishings fit right in. The furniture designer’s own inspirations, after all, aren’t that dissimilar from Beachler’s concepts for Black Panther: His pieces for Jomo Furniture, which he launched in 2017, nod to his Ethiopian heritage, while putting a contemporary spin on such traditional fixtures as African birthing chairs, ceremonial tools, and headrests.

So when he received a “vague” email from Marvel Studios requesting to use his furniture on an unnamed film, he knew, “it has to be Black Panther.”

Wakanda Forever would end up featuring five of Tariku’s designs, following a “mad dash,” he said, to deliver the pieces to the set. To meet the commission, he fabricated a dozen of his Mukecha stools, a height-adjustable seat inspired by African mortars and neck rings, as well as iterations of his geometrical Ashanti, Boraatii, and Dogon end tables. The production also rented a special black version of his three-legged Nyala chair, which has a back and armrests that echo the spiral horns of the titular antelope.

The furniture isn’t always easy to spot amid the action-packed film. Tariku could only spot a character sitting in his Nyala chair toward the end of the movie, but remains heartened that his work has made it to the big screen. “I really didn’t care how they used [the pieces],” he told Artnet News. “Just being in there is good enough for me.” (He also reckons the furniture might be used in the upcoming Disney+ series set in Wakanda.) 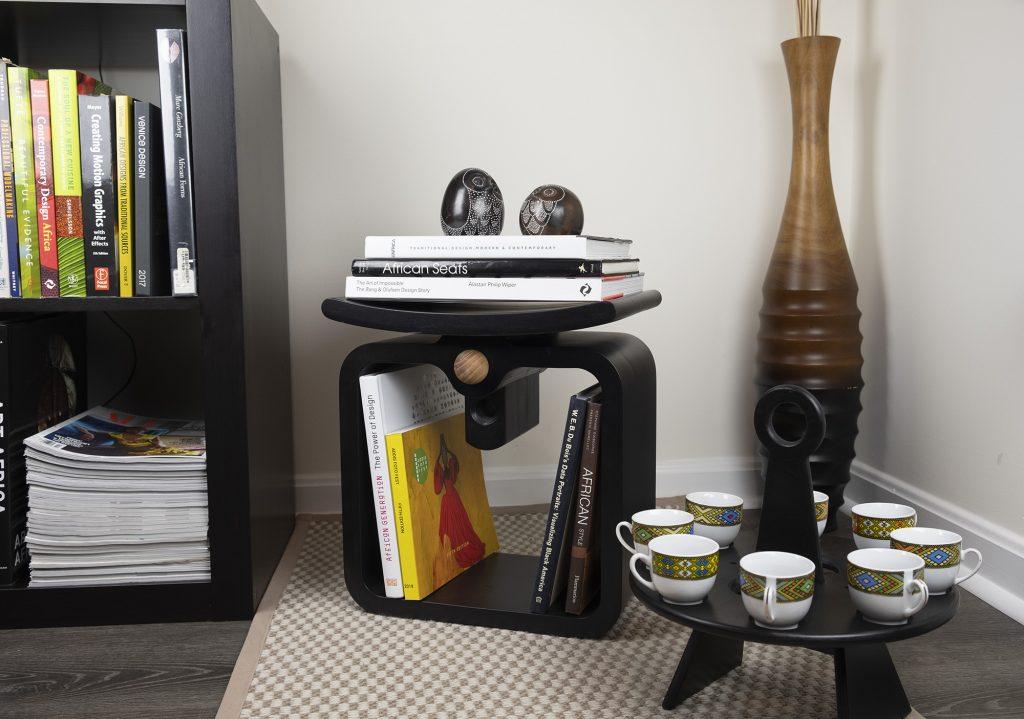 The Dogon stool/end table, designed by Jomo Tariku and inspired by geometric stools of the Dogon tribe in Mali. Photo: courtesy of Wexler Gallery

The set of Wakanda Forever was also furnished with the work of other African designers and artisans. Among them were highly visual fittings by Candice Lawrence, the Cape Town lighting designer behind Modern Gesture, and the signature Djembe tables created by Tekura, a studio based in Ghana. In a statement, Tekura’s managing director Audrey Forson called the company’s inclusion “a major recognition for Tekura and African designers to show our excellence to the world.”

Surfacing that Black excellence is no doubt central to Beachler’s own vision of an African kingdom untouched by colonization. Her intention, she told Okayplayer, was “basically giving the world a perspective they haven’t seen of African [and] Black folks’ world. That there is a history beyond slavery that we don’t know, and that history is rich and diverse on its own.” In 2019, Beachler became the first African-American to win an Oscar for production design.

Tariku himself credits Beachler for not only involving him in Black Panther, but also in the Metropolitan Museum of Art’s ongoing Afrofuturist Period Room, which she curated. It’s recognition that arrives on the heels of a two-year stretch that has been, as Tariku put it, “just nuts”—during which he collected the Black Artists and Designers Guild’s 2022 Maker Award, and had his chairs acquired by institutions including LACMA and the Denver Museum of Art. His latest work was also recently exhibited at Design Miami as part of Wexler Gallery’s showcase.

More so, though, the Wakanda Forever gig was personal. Tariku brings up his son’s love for Marvel films, including 2018’s Black Panther, which the boy watches on repeat, making them “a Marvel family.”

“I grew up in Ethiopia and it’s not like we had access to the comics,” he added. “But we knew who these characters were, so you can imagine seeing these things growing up and now your stuff is in the movies, it kind of feels great.”