Home News The Orange County Museum Opens Its New Home, With a Focus on... 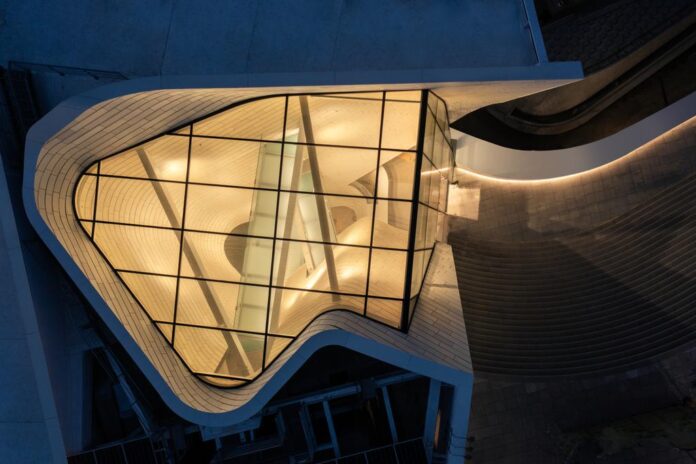 At 4 p.m. on Saturday, October 8, a group of Buddhist monks, from Tibet by way of Long Beach, came to Costa Mesa to bless the Orange County Museum of Art’s staff and its new building. An hour later, the 24-hour public opening was underway, with 10,000 guests passing through during that time.

The bright, new, off-white, window-filled structure fits snugly into the already-built-out Segerstrom Center for the Arts. In the words of architect Brandon Welling, it is “the last piece of the puzzle,” in a complex that opened in 1986 and already included a concert hall and theater designed by architect Cesar Pelli (opened in 2006), and a plaza with an outdoor stage and café (opened in 2017).

It even had a towering Richard Serra sculpture, there before construction on the museum began and now located outside the front entrance. “It’s funny,” said Welling. “Typically, you complete the museum and say, ‘Okay, bring in the Serra.’”

Even though it was the last to arrive, OCMA has a longer history than its neighbors. When it first opened in 1962, the museum was called the Balboa Pavilion Gallery, because it was in the historic Newport Beach Balboa Pavilion, a seaside recreation facility built in 1906 and standing on stilts. The museum was founded quickly, within a year of 13 women starting a group they called “the Fine Arts Patrons of Newport Beach.”

Bettye Winckler, one of the patrons, learned that the developer Ducommun Realty had purchased the Pavilion, which was in dire need of repairs. She called the company’s director, Alan N. Ducommun, at his home. “I guess he couldn’t believe what he heard––some women he didn’t know wanted to use his building for their art museum, for free,” she later recalled. The women offered to make improvements to the structure in return for rent-free use. Ducommun consented. 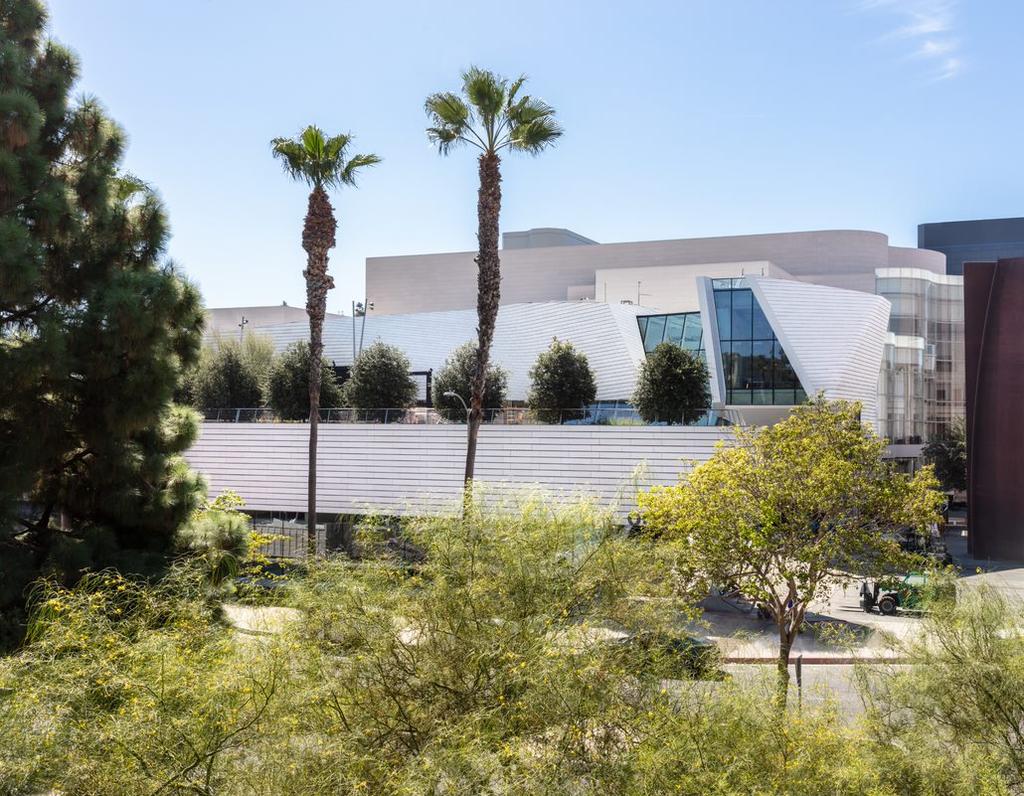 Few museums in the region were showing contemporary art at the time. The Balboa Pavilion Gallery opened the same year that the Los Angeles County Museum of Art (LACMA) got its own building on Wilshire Boulevard, and two years after the La Jolla Museum of Art (now the Museum of Contemporary Art, San Diego) gave John Baldessari his first show, marking its foray into the new.

The Orange County gallery dedicated itself to new work from regional artists from the start. While the 13 women on the founding committee were not museum professionals, they had spent time with art, and they understood the mechanisms that support it.

Winckler, who would serve as the museum’s founding director, had studied pottery and painting. Dottie Ahmanson had just divorced her husband Howard Ahmanson, the founding patron of LACMA. Los Angeles Times society editor Mary Matthew wrote about the opening, saying the drive was worth it for two reasons: “The sunset from the bank of windows on the second floor of the historic Pavilion overlooking the bay; another more important, was to see what a group of determined women can accomplish in a year’s time.”

The drive is no small thing, for anyone coming from elsewhere in the region, specifically Los Angeles. Over the decades, Orange County has gained a reputation for being diametrically opposed to Los Angeles. It is home to Disneyland and the over-the-top Crystal Cathedral, an $18 million glass monument to Jesus.

“Viewed from L.A., Orange County was but a trifling gas stop on the way to San Diego,” wrote Pat Morrison in a 1990 Los Angeles Times article about the rivalry between the two counties, “the jurisdiction where the Ku Klux Klan, in 1924, briefly ran the city of Anaheim. The hayseed county that begat Richard Nixon.” The differences are real—Orange County, though no longer whiter, is still richer than L.A.

Until Katie Porter won in 2018, no Democrat had ever represented the 45th district, located in the heart of the OC. But the region’s art history is more fluid, especially considering how many artists taught in or attended schools, like the University of California’s outposts at San Diego and Irvine from the 1960s onward. Light and Space artists Robert Irwin and Craig Kauffman taught at UC Irvine, and later, so did Vija Celmins.

John Coplans, an early editor of Artforum, established the University Art Gallery in 1964. Soon after its founding, the Balboa Pavilion Gallery was showing artists like those above, alongside Joe Goode, Ed Ruscha, and even Robert Rauschenberg.

At first, however, they focused on an older, quainter generation of artists. Millard Sheets, a regionalist active in Southern California since the late 1920s, gave an opening lecture tinged with American exceptionalism. “We must show that with free enterprise we can do things that others can’t,” he avowed.

More pragmatically, he imagined a robust education program for the fledgling museum, and a rental gallery (from which emerging collectors could rent, rather than buy, art).

The 13 women promptly accomplished both, hosting lectures regularly and even launching a “Junior” Fine Arts Patrons of Newport Beach contingent. 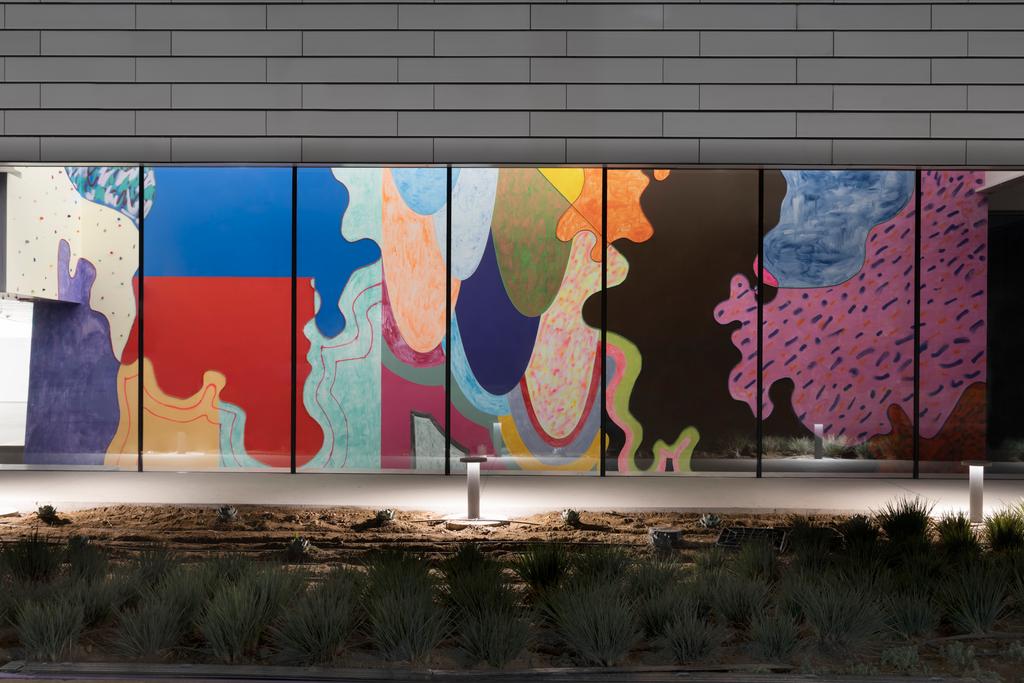 “They had a real understanding of the role and importance of art and culture in society, and saw a gap here,” said Heidi Zuckerman of the women who founded OCMA. Zuckerman, formerly founding director of the Aspen Art Museum, was appointed director of OCMA in early 2021. She titled the inaugural collection exhibition, “13 Women,” after them, trying to conjure their original, audacious spirit—though the intervening years have been far from straightforward.

Among other things, the museum moved frequently. By the time it renamed itself the Newport Harbor Art Museum in 1977, the museum had relocated to Fashion Island, a shopping district. Its final building there, a modest single-story structure, was surrounded by a large parking lot.

Taller business parks, apartment complexes and department stores loomed in the near distance. The museum felt like an island. Plus, even after an expansion, it still lacked adequate gallery space. At one point, artist Richard Jackson installed a large sculpture of a dog, peeing on the museum’s exterior (“The best comment on that architecture,” according to writer William Poundstone).

The museum first announced ambitions for a new, major building in 1987. Plans moved slowly. Renzo Piano was enlisted as architect, and then forced off the project. The museum changed its name to the Orange County Museum of Art, and cycled through multiple directors and curators. Then there were difficulties selling the Fashion Island building, the money from which would help fund the new construction.

Morphosis, the architecture firm founded by Thom Mayne, won the competition to design the building in 2007. They unveiled their current design over a decade later, in 2018, the same year the museum sold its former building. They broke ground in 2019. For all the years that it remained empty, the museum’s current site had been a field, well-used by the local community.

Morphosis wanted to respect the sites communal history, explained Welling, the principal architect on this project. They essentially raised that field, turning it into an elevated public plaza, now graced by a large figurative sculpture by Sanford Biggers.

Where OCMA’s previous building felt segmented, the new galleries almost feel like one continuous space. Indeed, the main galleries, surrounded on two sides by big windows, could be opened up to become a single space.

“We’re really trying to make everything as transparent—literally transparent—as possible, but also accessible,” said Welling. She adds that the fact the museum is now free—thanks to a $2.5 million gift from Moti Ferder, founder of Lugano Diamonds—makes the goal of removing barriers all the more achievable (no physical barriers, no economic ones).

When Zuckerman took over as director, she spent time examining the museum history, and coined the term she has used frequently: “Looking back to look forward.” The first three exhibitions, including the collection installation, look at the institution’s history. Fred Eversley, featured in the upstairs galleries, had his first solo show at the museum in 1976; the California Biennial, which Zukerman resurrected, was inaugurated by the museum’s then-curator Paul Schimmel in 1984. The shows came together quickly, though not without controversy.

Days before the museum opened to the public, the notoriously private and revered SoCal artist Ben Sakoguchi posted to his website a detailed timeline of his experience with OCMA. As Sarah Cascone reported for Artnet News, Sakoguchi described agreeing to participate in the biennial; a work was chosen; and then in the weeks leading up to the exhibition, he had been asked repeatedly to explain the work, even answering 17 questions and recording an audio explanation.

The vast, multi-part painting, which included two swastikas, referring to the Nazi embrace of the symbol and its longer history, was ultimately “rejected,” in Sakoguchi’s words. For its part, the museum said its curation was an “iterative process,” though if this is the case, the iterations were still unfolding close to the exhibition’s opening. 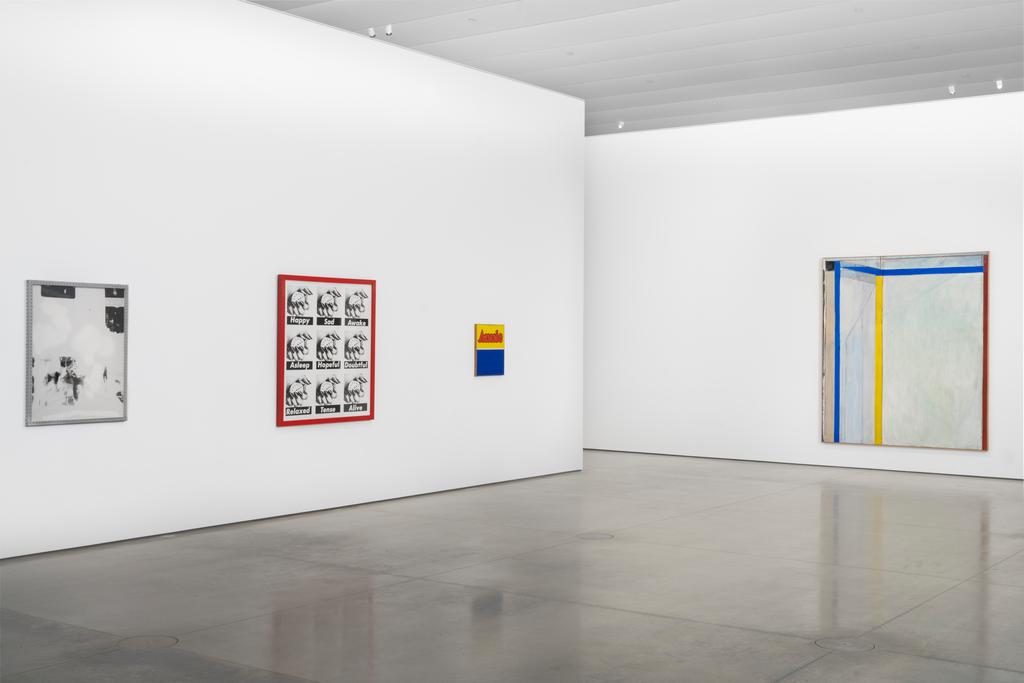 The “13 Women” exhibition better reflects the museum’s commitment to supporting artists from California and beyond. While the show largely features female-identifing artists, the “women” in its title refers to the founders, and the installation underscores synergies between objects. On a wall near the entrance, a large white, glistening abstraction by Light-and-Space associated Mary Corse is closely flanked by colorful abstractions by younger artists, Sarah Cain and Lucy Bull.

The installation suggests an intimacy and influence that rarely accompanies Corse’s work, which tends to be hung with more space surrounding it. “I’ve been thinking a lot about this idea of keeping company,” Zuckerman said, “and what keeps us company, who keeps us company, and what does that mean?”

In an adjoining gallery, a gargantuan wooden machine built by sculptor Alice Aycock in the 1980s shares space with Charles Ray’s (1986), a minimal steel cube filled to the brim with ink. The museum acquired both ambitious works in the 1980s, but they had never shown Aycock’s more monumental and abstract sculpture, which is loosely based on a loom. It took a team of installers six weeks to assemble.

Together, both sculptures upend expectations about how objects should behave—a minimal sculpture quivering with liquid next to a monstrous homage to a feminized craft. It also raises high expectations for what other gems will emerge from, or join, the museum collection now that it has a permanent, stable home.