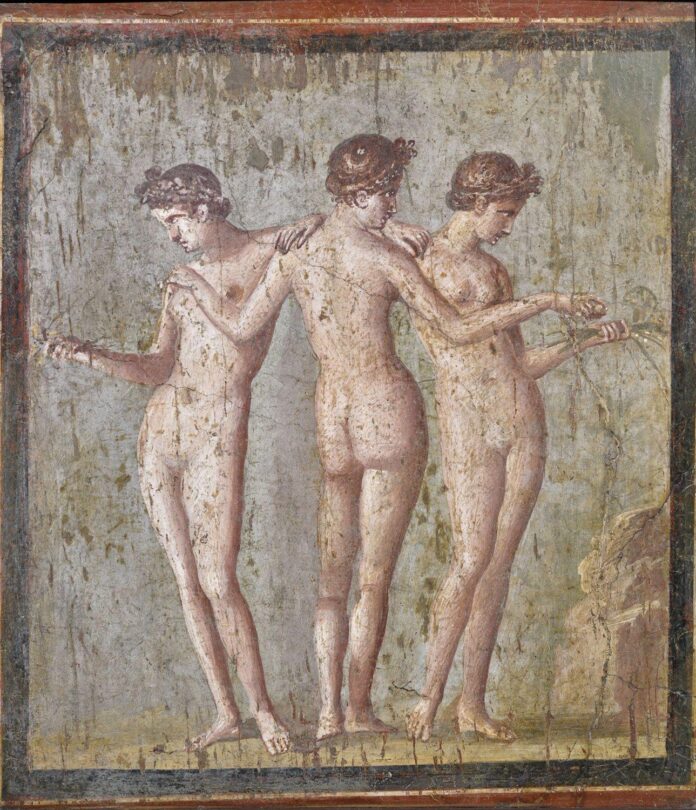 Their rich frescoes depict sacred landscapes, passages from Greek mythology and tables brimming with fruits and meats. Decorating the walls of villas, some represent gods, warriors, satyrs and poets. Others show a baker at work, actors in masks and musicians giving concerts. Many are preserved in astoundingly vivid detail.

When Mount Vesuvius erupted in AD79, molten rock, ash and volcanic gases smothered the cities and towns of Pompeii, Herculaneum, Boscoreale and Stabiae. Their beautifully preserved wall decorations were discovered in excavations from the late 1600s onwards, with many of them moved to museums like the Museo Archeologico Nazionale di Napoli (Mann) for safekeeping. Today, they provide valuable insights into the tastes, customs, diets and painterly techniques of ancient Rome.

An unprecedented number are leaving the vaults of the Mann, the biggest repository of archaeological paintings in the world, for The Painters of Pompeii, a show opening this month at the Museo Civico Archeologico di Bologna. It is larger than the previous iterations of the exhibition in the US, where around 60 frescoes were shown in Oklahoma and 35 in New York. In Bologna, 100 paintings will appear, almost half of which have never left the Mann.

While the earlier shows were geared towards informing inexpert American audiences, in Italy, where classical history dominates school syllabuses, the focus will be on looking beyond the paintings to explore Roman society. “The average Italian has a good base of knowledge about Pompeii, but socially oriented studies are less common in this country,” says the curator, Mario Grimaldi. “Just focusing on the Pompeian frescoes wouldn’t have brought anything new. We are therefore shining a spotlight on the social role of the painters.”

While little is known about the painters (pictores), most of whom did not sign their works, their social status was probably limited. Pliny the Elder, who died in Stabiae when Vesuvius erupted, lamented in his Natural History that the standing of artists had deteriorated. “The wisdom of the Ancient [Greeks] seems more admirable”, he wrote, because that civilisation regarded painters so highly that they were deemed “property of the universe”.

The show will provide further context on the life and work of the painters. Some of the rooms for which the frescoes were created will be reconstructed, with the works positioned and lit to reflect their original settings. They will be shown alongside cups of pigment found during excavations, domestic objects such as oil lamps, jugs, vases, and painting tools including squares, compasses, plumb lines and preparatory drawings.

Grimaldi says there are a number of question marks about the social status of the pictores. “What relationship did they have with their clients? What was the difference contractually between public and private work? We can draw clues from a whole range of elements, which are like pieces of a puzzle.”

Claims that the painters were lowly slaves “don’t stack up”, he says. The pigments on display will be accompanied by recent research showing how the prices varied depending on their availability. Painters may sometimes have been expected to purchase these materials, adding weight to the theory that they enjoyed a degree of economic independence. “The painters did not identify as individual masters but worked in groups and were seen more as decorators,” Grimaldi says.

Further clues suggest that Roman women were allowed to paint, either privately or professionally, with a number of frescoes showing them sitting at easels. “The world of painting was possibly much more open than you might imagine,” Grimaldi says.

What is certain is that painters formed an essential link in the chain connecting the artists of ancient Greece with those of the Renaissance and Baroque eras. One fresco depicts the lithe, androgynous Three Graces, a favourite subject of Botticelli and Raphael. Another shows Pero breastfeeding her imprisoned father, Cimon, as later portrayed by Caravaggio and Rubens. “Research is ongoing,” Grimaldi says. “But so much can be discerned just by looking at these incredible works.”