Home News Mega-Collector Ronald Perelman Is Suing to Recover $410 Million for Art He... 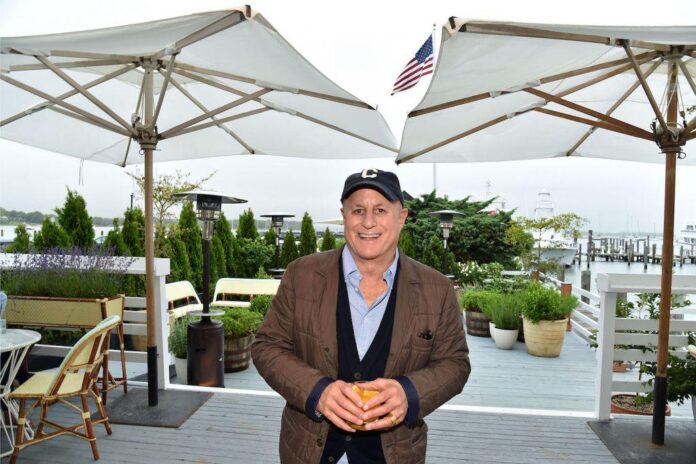 Late on the night of September 28, 2018, a fire broke out at billionaire financier Ronald Perelman’s East Hampton estate, known as the Creeks. Multiple firefighting teams from neighboring towns raced in to assist and, after approximately two hours, finally extinguished the blaze.

Roughly a month later, the  reported that most of Perelman’s multimillion-dollar art collection was unharmed, and, since the fire had been contained to the third floor, paintings and sculptures on the lower floors were “salvaged with minor smoke and water damage.”

More than four years later, however, that narrative is up for debate in court. Holding companies affiliated with Perelman are locked in a bitter, high-stakes battle with a consortium of insurers over a group of five blue-chip paintings that they claim were damaged during the fire.

Three limited liability companies collectively titled AGP Holdings are the official plaintiffs in the lawsuit, which has been winding its way through New York State court since mid-2020, but has not been reported publicly until now. AGP claims it is owed a whopping $410 million for five allegedly damaged works: two by Ed Ruscha, two by Andy Warhol, and one by Cy Twombly. 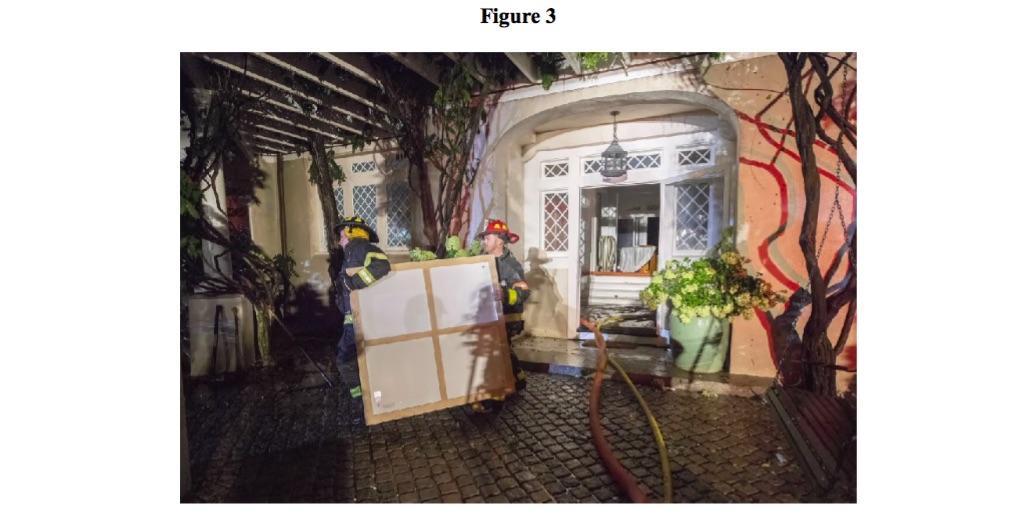 An artwork being carried out of the home. Image via Supreme Court Records Online.

The insurers, who have already paid out roughly $141 million under the policy for fire-related damage, have challenged and ultimately denied the claims on these particular works. Further complicating matters, the claims were not made until nearly a year and a half after the fire, when the collector said he began noticing that the works, which had been returned to the walls of his East Hampton home, had “lost their luster, lost their depth, lost some of their definition, and lost a lot of their character,” according to Perelman’s testimony.

The lawsuit has flown under the radar for years because original filings do not identify Perelman or the location of the fire. Plus, while most of the original filings were heavily redacted, more recent ones, including expert analysis and the transcripts of Perelman’s testimony, are more revealing.

Attorneys for AGP Holdings, Perelman’s company MacAndrews & Forbes, and the insurers named as defendants in the case did not immediately respond to a request for comment.

The insurers claim that any damage to the works in question predated the 2018 fire, and that they were sued before they could even complete their investigation. The result is a blizzard of legal documents—already approaching 300 filings—debating everything from the timing of the claim requests to the experts and methodology used to evaluate the works. AGP’s insurance claim was officially denied in January of this year, after the lawsuit was well underway.

The priciest of the five artworks, according to legal documents, is Cy Twombly’s Untitled (1971), a large canvas with the artist’s signature scrawling loops, which Perelman acquired from Gagosian in 1993. AGP claims the work is worth $125 million—$55 million more than the priciest Twombly ever sold at auction.

Also identified are two Warhol paintings: Elvis 21 Times, with a claimed value of $75 million, and Campbell’s Soup Can, estimated to be worth $100 million. For Ed Ruscha’s Standard Station, one of the artist’s most iconic images showing the gas station of the same name, the claim is $60 million, while for the artist’s Box Smashed Flat, which depicts a flattened red Sun Maid brand raisins box above the word “Vicksburg,” the claim is $50 million. These works were also acquired through Gagosian.

The insurers named as defendants include “certain underwriters of Lloyds of London,” Great Lakes Insurance SE of Germany, Swiss Re International of Luxembourg, AIG Property Casualty of New York, and Federal Insurance Company of New Jersey. 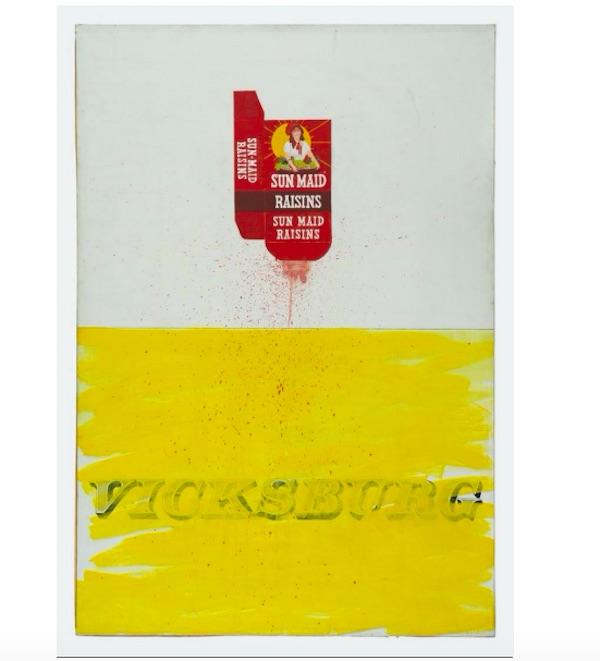 An image of Ed Ruscha, Box Smashed Flat in one of the expert analysis reports. Image via Supreme Court Records Online.

Perelman’s companies hired Jennifer Mass, a high-profile art expert and president of Scientific Analysis of Fine Art, to assess the works. She found that all had sustained “fire-related damage,” according to court filings. Her reports do not appear to be public, but the complaint cites “extreme heat, smoke, soot, moisture, and water” inside the house from the fire as potential catalysts for the alleged damage.

The insurers enlisted at least four different experts and companies for their own analysis. They claim that AGP did not demonstrate physical loss or damage. Further, an insurance adjuster retained by the companies notes that AGP’s policy does not cover “wear and tear, gradual deterioration, inherent vice,” nor does it cover “accelerated aging.”

In examination under oath last summer, Perelman said he noticed changes to the pictures upon his return to the house after the fire in late May 2019.

Asked what changes he noticed in the Twombly, Perelman responded: “All of the pictures lost their luster, lost their depth, lost some of their definition and lost a lot of their character.”

He compared it to a piece of music. “I mean if the piano is out of key, and you’ve heard the piece performed on a piano that’s in tune, you know the difference.”

The financier described a similar view of the Warhol Elvis, saying that the colors had lost their “depth and character.” He added: “It doesn’t pop like it used to be. You know, I go back, that’s why they called it pop art.” 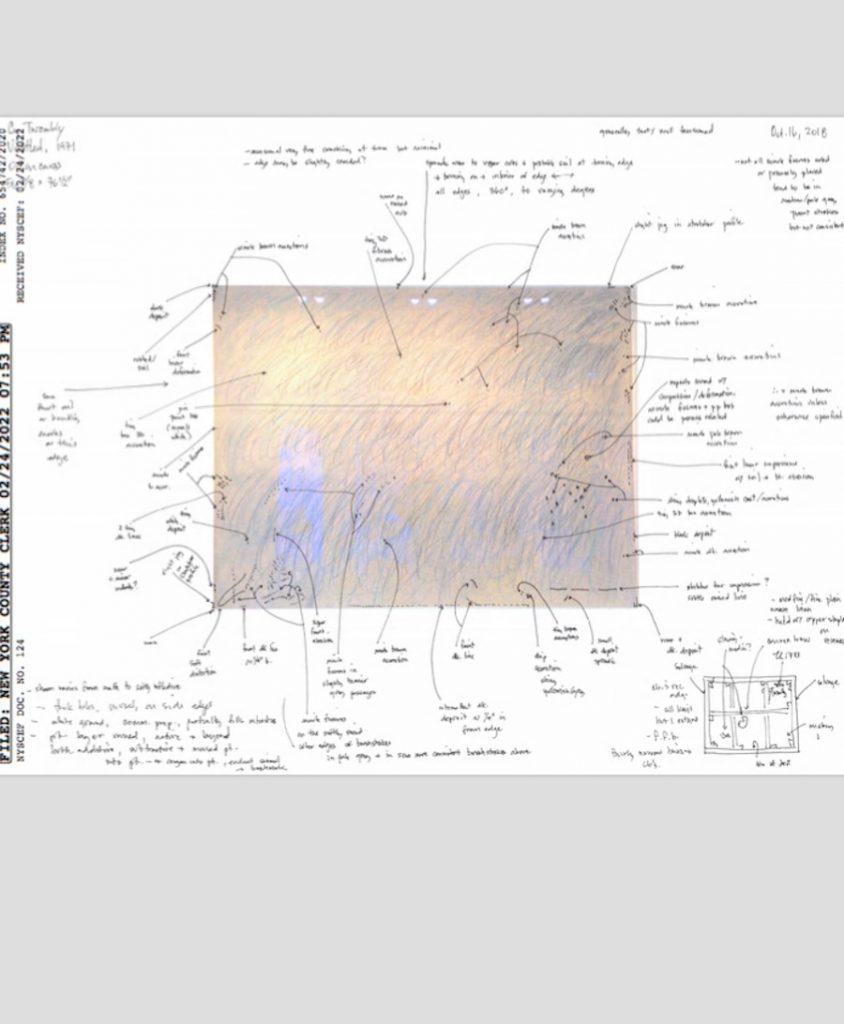 Amid the ongoing litigation, a “special referee” has been appointed in the case and the plaintiffs and defendants have been directed to share fees and expenses equally.

Perelman’s current estimated net worth is $2 billion. In recent years, he has reportedly sold off billions of dollars worth of assets, including artwork and real estate, as the pandemic negatively affected his various business enterprises.

Detractors said the timing of the Perelman insurance claim is highly suspect. “It happens to coincide with a time when, based on news reports, Mr. Perelman was desperately seeking cash to satisfy debts that had come due,” the insurers stated in court documents. “A successful insurance claim would provide that cash because the insured values of the five paintings are concededly ‘multiples’ of their fair market value.”

Further, the insurers note, the five paintings “happen to hold the five highest insured values under the insurance policies.”

From a new recording of the song that made Bob Dylan famous to a gay rights protest artefact: our pick of the highlights from...