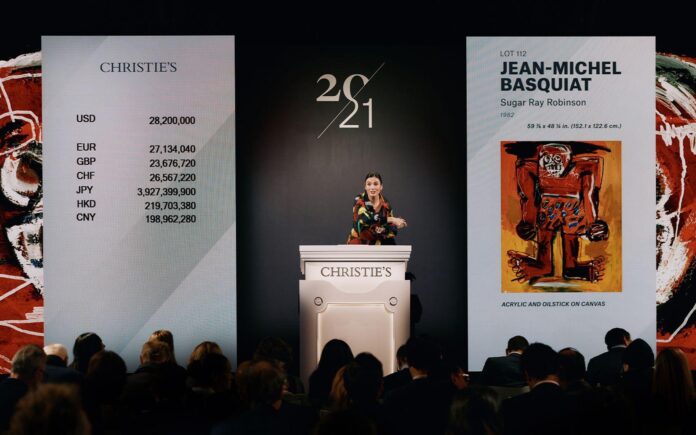 Bucking auction fatigue and a seemingly endless smorgasbord of artists ranging from Edouard Manet to Andy Warhol, Christie’s delivered a $421.9m marathon pair of evening sales at its Rockefeller Center headquarters on Thursday night (17 November). Split into 20th and 21st century lineups, the former realized $307.9m (including fees) for the 69 lots sold and a svelte 4% buy-in rate by lot, while the latter clocked in at $114m (including fees) for 35 lots sold and an 11% buy-in rate by lot.

For comparison sake, last November’s 20th century evening easily trumped this evening’s tally, realising $419.8m (with fees), as did the 21st century component, which brought $219.2m (with fees), for a combined and jumbo tally of $639 million. Still, Thursday night’s haul was a huge result thanks in significant part to a rash of guarantees in both categories, with at least 41 third-party guarantees booked in the 20th century sale, and seven and counting in the 21st. Eight artist records were set, with three in the 20th century sale and five in the 21st century sale.

The marathon evening got off to a rapid start with Howardena Pindell’s large-scale abstraction Untitled from 1971 (est $500-$700,000), which sold to Florence-based collector Christian Levett for $850,000 ($1m with fees). “I have a big collection of Abstract Expressionist female artists,” said the collector as he made a beeline for the exit.

Egon Schiele’s gouache and watercolour depiction of a contorted figure, Frau, das Gesicht verbergend (1912, est $1.5m-$2.5m), is a restituted work from the heirs of Viennese cabaret and film star Fritz Grünbaum, who was murdered in the Holocaust. It sold for $2.1m ($2.5m with fees). Alberto Giacometti’s Surrealist-infused bronze from a 1959 cast, Femme couchée qui rêve (est $3m-$5m), brought $3.1m ($3.7m with fees).

As in the most recent market fashion at auction, the pacing of the evening jumped decades and epochs without apparent rhyme or reason, as Claude Monet’s 1880 ripening still life, Le panier de pommes (1880, est $4m-$6m), sold for $4m (($4.8m with fees). Yes, you read correctly, a 19th century work crept into the 20th century category. It last sold at auction at the same house in November 2005 for $2.6m before fees and came back this round with a house guarantee.

Another 19th-century contender, Edouard Manet’s stunning page-sized scene, Le bal de l’Opéra (est $4m-$6m), dating from 1873 and highlighting a young bearded gentleman in a top hat, sold for $3.2m ($3.9m with fees). It made the equivalent of $2.6m when it last appeared at auction, at Sotheby’s London back in December 1996. It certainly was a historic provenance prize given that Gertrude Stein was an early owner

Jumping ahead to the post-war years, Willem de Kooning’s magisterial and juicy abstraction from his storied East Hampton-era series, Untitled II (around 1978), tanked at a chandelier bid of $27m. The unpublished estimate for the work was in the region of $35m. It came with a house guarantee, so Christie’s is the proud new owner of the temporarily spurned painting. A later and decidedly spare De Kooning, as if it were on a crash brushstroke diet, Untitled” (1985, est $8m-$12m), sold to a telephone bidder for $7.8m ($9.3m with fees).

Several of the entries from the ongoing liquidation of the collection of late Swiss dealers Thomas and Doris Amman popped, with Robert Ryman’s white-on-white abstraction, Untitled/Winsor (1965, est $6m-$8m), sold to Susan Dunne of David Zwirner Gallery for $10.7m ($12.5m with fees). “It’s a gorgeous thing,” Dunne said as she departed the saleroom, “and really a rare opportunity since Bob only made six of these in his career.”

Another Ammann lot, Andy Warhol’s black t-shirted Self Portrait (1964, est $3m-$5m), sold to dealer Alberto Mugrabi for $2.7m ($3.3m with fees). A later and larger Warhol, also from the Ammanns, Hammer and Sickle (1976, est $4m-$6m), realized $3.6m ($4.3m with fees). Mugrabi was the underbidder. Staying for a moment in the Pop art realm, Roy Lichtenstein’s yellow-hued tondo, Mirror #5” (1970, est $3.5m-$5.5m), barely glared at $2.6m ($3.1m with fees). Originally gifted to the artist’s son Mitchell Lichtenstein by his father the year it was painted, the proceeds will support reproductive rights and the Groundswell Fund, thanks to the consignor, the Agnes Gund Foundation.

The 21st century punches above its weight

The brawny cover lot came up early in the sale, with Jean-Michel Basquiat’s domineering and gloved boxer, Sugar Ray Robinson (1982, est $35m-$55m), entering the auction ring and lightly punching its way to $28.2m ($32.6m with fees).

“I think it’s a $50m painting,” said Alex Rotter, chairman of Christie’s 20/21 Art department and who took the winning telephone bid for an anonymous client. “It was a very good result for a very good painting.” The room, it appeared, didn’t think so. It last sold at Christie’s New York in November 2007 for a hammer price of $6.5m.

Still sifting through New York’s downtown 1980s art scene, Keith Haring’s upside-down breakdancing figure in enamel and DayGlo on metal, and sheathed in the artist’s painted frame, went for $4.8m ($5.8m with fees), firmly within the $4m to $6m estimate. This is its third time at auction, following the one here in May 2006, when it brought $553,600.

The three evenings at Phillips, Sotheby’s and Christie’s—and not counting the $1.6bn Christie’s sold from Microsoft co-founder Paul G. Allen’s collection last week—tallied $875.7m with fees, compared to the cumulative take of $967.9m at those houses last November. The takeaway? Despite challenging economic and geopolitically fraught times, the global art market is still awash with cash and a seeming abundance of international buyers.