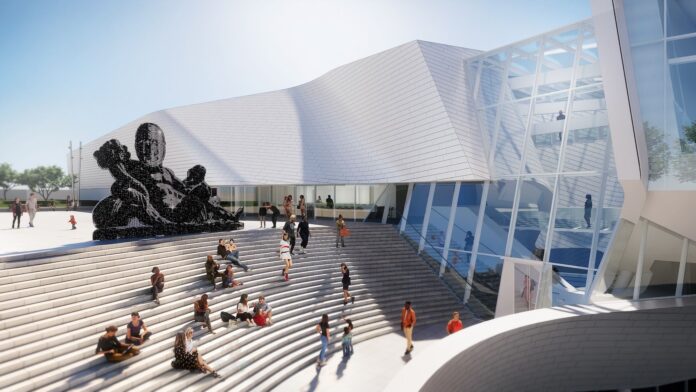 A major new outdoor sculpture by Sanford Biggers has been commissioned by the Orange County Museum of Art (OCMA) in Costa Mesa, California, for its reopening on 8 October. Of many waters… (2022) , a 24ft-wide and 16ft-tall figurative sculpture, will be placed at a prominent position on the museum’s sculpture terrace.

Referencing Western and non-Western traditions of art, the work depicts a reclining Black figure, its right arm cradling a cornucopia, a traditional symbol of abundance. The figure’s oval head consists of two overlapping heads, made of metal sequins. It is inspired by 19th-century masks of the Baule communities of Côte d’Ivoire, an image which may celebrate complementary opposites or twins, a sign of good luck. For the artist it “combines my interest in classical sculpture and American quilt making”.

Museum director Heidi Zuckerman, who met Biggers early on in his career and gave him his first museum exhibition, Psychic Windows at the Berkeley Art Museum and Pacific Film Archive in 2002, could not be more pleased. She had read about him in a magazine, and called him for a studio visit when she would be in New York.

“I went and did a visit with him in the World Trade Center in the late summer of 2001—there was a program where they were giving empty floors to artists,” she says. “That was the first time in my career that I met an artist and immediately offered a solo show. I was so overwhelmed by what I saw, the uniqueness of his vision, the fierceness of his intellectualism and his understanding of what he was communicating with his work.”

Over the years the two kept in touch, and last year Zuckerman saw The Oracle (2021), Biggers’s monumental cast bronze sculpture at Rockefeller Center. It combined a seated, Zeus-like figure with an African-style mask. “I loved this huge figure serving like a guide for the 8 million people who live in New York and visitors, this idea of art being a guidepost for what we might hope to know, or to make decisions about how we move forward.”

Her first thought was to bring the sculpture to her museum. Biggers suggested making something new. Zuckerman invited him to Costa Mesa for a site visit, and they discussed how she wanted it to help inaugurate the museum.

“If there is a statement in this piece,” she says, “ it is to say that the museum is a place where everyone’s welcome, that we are a site of openness.”  She adds that the museum is going to offer free admission for at least the first ten years after reopening.

The Biggers sculpture is being fabricated in Southern California and will be installed in time for the October reopening, helping to inaugurate a $93m expansion and renovation designed by architecture firm Morphosis. The monumental sculpture will remain on view until 5 February 2023. The museum will reopen with several shows, including the return of the California Biennial and 13 Women, with works from OCMA’s collection curated by Zuckerman.

‘Come as You Are’: How ICA London’s Director Is Rejuvenating the Museum… by Hosting Genre-Bending Late-Night Parties

The British Museum Declined to Show Ultra-Precise Digital Replicas of the Parthenon Marbles. So Another Institution Stepped in