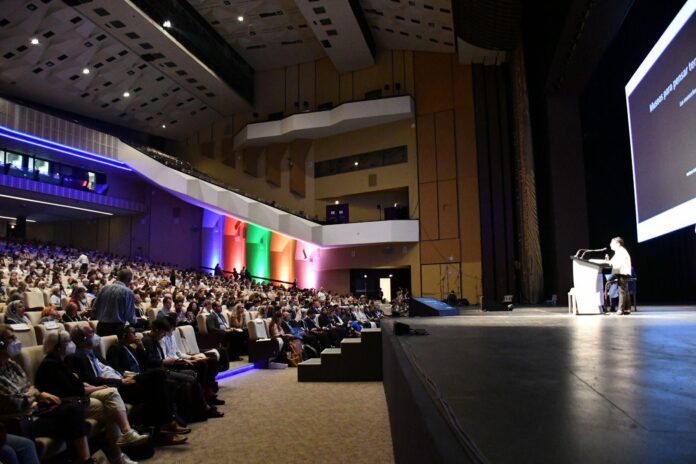 The International Council of Museums (Icom) has condemned Russia for the “deliberate destruction of Ukrainian cultural heritage” whilst voting to strengthen its Code of Ethics. The comment was made in a statement published on Icom’s website on 19 August, publicising the executive board’s unanimous decision to establish a new ethics protocol. Announced during the Icom General Assembly in Prague this week—the largest gathering of museum professionals in the world—Icom said the revised protocol would allow the organisation to more readily “address conflicts”.

The news comes as Anastasiia Cherednychenko, the vice-chair of Icom Ukraine, claimed that Russia had committed “cultural genocide” in Ukraine and that Icom Russia had subsequently violated Icom’s code of ethics as a result, during a panel discussion at the Prague conference.

After, Icom Ukraine released an open letter addressed to Icom’s president Alberto Garlandini, saying: “Russia is deliberately destroying and robbing Ukrainian museums and moving their collections to Russian territory while Russian Icom members participate in Russia’s manipulative projects that run against the founding principles of Icom.” Icom Ukraine went on to say that the international museum community was “complicit in these violations” if it did not take measures against Icom Russia.

Senior representatives of the Ukrainian Ministry of Culture—led by Cherednychenko—called for Icom Russia to be expelled from the council because of the invasion. A strengthening of the code of ethics is needed in order to do so, the letter adds: “Unfortunately, the rules developed and adopted by all Icom members no longer work. Silently watching the aggressor’s actions or merely expressing concern does not help; moreover, that gives the green light to those who might be tempted to violate the rules in the future. Therefore, we request that Russia’s membership in Icom is terminated.” Since its founding in 1946, Icom has never expelled a national committee.

Icom’s leadership responded by overwhelmingly voting in favour of establishing a new protocol on the ethical code. The review will be “given priority by the Icom Standing Committee for Ethics (Ethcom) immediately following” the conference in Prague, the statement said.

The allegation that the destruction of Ukraine’s cultural heritage is “deliberate” is an issue that remains contested and debated within international humanitarian law. Russia has continually challenged this claim, and has repeatedly alleged that damaged cultural buildings were occupied by Ukrainian troops as garrison points, rendering them as legitimate military targets. The Ukrainian government claims these same sites are being actively targeted by Russia in a campaign of ethnic cleansing. No independent judiciary has yet verified either claim.

By using this terminology, Icom appears to be adopting the same stance as the Ukrainian government, despite its stated claim to remain neutral. When the war broke out in February, Icom “declared its expectation that all countries in the region abide by their obligations under international cultural conventions.”

Icom Ukraine claims that 450 cultural landmarks have been destroyed or damaged by the Russian army, including 34 damaged or destroyed museums and memorial complexes.

However, Amnesty International—one of the most respected and trusted bodies in humanitarian aid—published a report on 4 August alleging that the Ukrainian military is itself violating international humanitarian law by turning civilian facilities—including heritage sites, cultural institutions and religious buildings—into military targets by establishing garrisons to defend the country from advancing Russian forces. “Being in a defensive position does not exempt the Ukrainian military from respecting international humanitarian law,” said Amnesty International’s Secretary-General Agnès Callamard. Amnesty received widespread condemnation for the report. Critics said it enabled Russian propaganda by blaming those who are being attacked. Ukraine’s president, Volodymyr Zelenskiy, said in a Telegram address that Amnesty had tried to “shift the responsibility from the aggressor to the victim”.

In a request for comment on Icom’s official stance regarding the use of the word “deliberate destruction of Ukrainian heritage” in the statement on the new code of ethics protocol, a spokesperson for the Icom Executive Board struck a conciliatory tone: “As an international, non-governmental organisation and an advocate for the museum and heritage community, Icom has a duty to unite the museum community against the destruction of cultural heritage and illegal trafficking and to face the global challenges hand in hand. We must continue to denounce violence and wars and promote inclusive dialogue, peaceful interactions, constructive approaches and mutual understanding. More than ever, we must come together to examine how our organisation can best respond to crises involving armed conflict, while remaining connected by our common goal to protect and nurture the museum community and cultural heritage. We know that our colleagues in museums and cultural heritage sites are not responsible for their government’s acts of war. We therefore call on all of our members, in all parts of world, to adhere strictly to all obligations listed in the Icom Code of Ethics and to join in the efforts to protect heritage, museums and museum professionals in war zones and maintain the important cultural relations between all our national committees and throughout the international museum community.”

Icom Russia did not send a delegation to this year’s conference and did not respond to a request for comment at the time of publication.