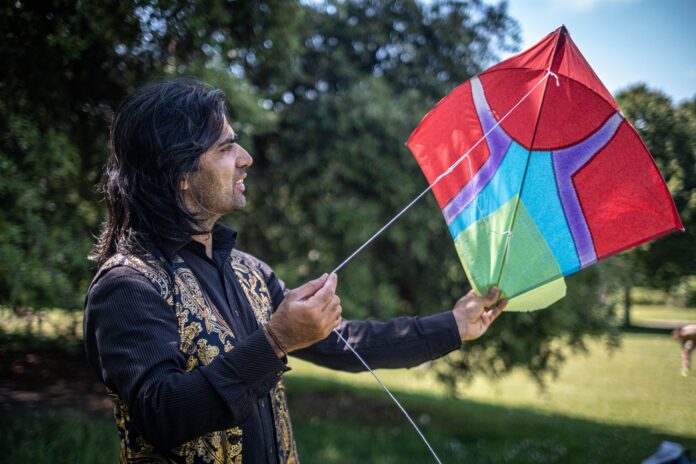 To mark one year since the Taliban takeover of Kabul, and in solidarity with the people of Afghanistan, a festival of kite flying, storytelling, music, poetry and dance will be launched across the UK and Europe on 20 August.

Fly With Me is a free festival organised by Afghan artists and Good Chance Theatre that will be held across 16 locations in the UK and Europe. Participants will be able to take part in kite-making and storytelling workshops and come together for a kite-flying celebration.

“In Afghanistan, kites occupy a unique space between national art form and national sport. They are a universal symbol of expression, skill and cultural pride,” says Sanjar Qiam, a master kite-maker and Afghan refugee based in the UK who is one of the co-organisers of the Fly With Me festival.

“Fly With Me is an act of solidarity with the people of Afghanistan and an opportunity for all of us to come together and feel between our fingers the strings that connect us to this incredible country, its culture and its people,” says Qiam.

The festival orgnisers are also calling on the UK government to treat all people seeking asylum fairly and equally and to treat Afghan refugees with the same respect and open heartedness shown to refugees from Ukraine.

Afghanistan, one year on

On 15 August, 2021, two weeks prior to the planned withdrawal of US troops from Afghanistan and after months of intense fighting between the Afghan army and Taliban forces, the war came to an abrupt end as news spread that the president, Ashraf Ghani, had fled the country. The Taliban fighters entered Kabul without facing much resistance and soon after they announced that they were the new rulers of the country.

The swift takeover sparked panic across Afghanistan, especially amongst those who had spent years working with Western allies, including Afghan artists and cultural figures. Tens of thousands of Afghans scrambled to desperately find a way out of the country in an effort to escape persecution at the hands of Taliban. However, only a fraction of those in danger made it out.

A limited number of artists and cultural figures were granted access onto the evacuation flights out of the country. The majority travelled to France whose art community rallied behind the artists and pressured the local authorities to provide assistance. As arts was largely not recognised by Western allies as a field that placed lives at risk, artists, including controversial visual artists, musicians, university lecturers, famous actors and directors were left behind. With the memories of how they were beaten, tortured and killed during the last Taliban rule still fresh in their minds, many artists destroyed their artwork, buried musical instruments and went into hiding to avoid detection and punishment for their work and for collaborating with “infidels”. The Art Newspaper published the series “Dispatches from Afghanistan” where artists shared their experiences since the rise of the Taliban.

Hopeless, in danger and futureless, a group of prominent Afghan artists and cultural figures penned an open letter to key world leaders in December 2021 pleading to be rescued. Art advocates and activists worked tirelessly to bring attention to their plight and to convince the UK government and other Western allies to help evacuate those in danger, but to no avail.

As murals and signs of the arts were removed by the Taliban from public view, cultural heritage advocates began to raise alarm bells about illegal excavations and lootings in the Bamiyan Valley, listed as a Unesco World Heritage in Danger in 2003, with some experts warning that the activities could cause the precious cliff to collapse.

Under pressure, the Taliban, who have been trying to present themselves as a changed and modern group, halted excavations close to the cliff, which once housed the sixth- and seventh-century Buddha statues before they were destroyed by the Taliban in 2001. However, the new Taliban government has no oversight body put in place to enforce laws and restrictions that were introduced to safeguard the valley and its treasures. As a result, the area that was once heavily protected is subjected to illegal constructions and activities that continue to threaten to damage the site.

The first real test of Taliban’s governance came in June 2022 when a powerful earthquake devastated countless villages in eastern Afghanistan, killing more than a 1,000 people and injuring thousands more. The new government was slow and chaotic in its initial response. Efforts were finally stepped up as international aid agencies stepped in to assist. Whether any archaeological sites were damaged during the quake remains unknown.

As the Taliban tightened its grip in the country, gains that were made over the years, especially in women’s rights and freedom of expression have been rolled back. Universities have banned music and sculpting. Both departments have been dismantled and their students have been forced to move to other art departments such as graphics. Women are ordered to wear loose and long black clothes when on campus. Art lecturers and instructors are warned against including human figures in their syllabus or else face punishment and art students remain in limbo as to what type of future they will have in a country that has all but banned the arts.

In recent months Germany has taken steps to save Afghan arts and culture by granting entry to a number of Afghan artists and cultural figures from a wide range of backgrounds, with the promise to do more in coming months. However, the acceptance procedure remains a mystery and appears to rely on recommendations by trusted groups or individuals with links to the foreign ministry. Afghan artists themselves are unable to contact anyone to present their cases. Still, the efforts are welcome as Germany appears to be the only country who is currently providing any assistance to Afghanistan’s art community.

With the US, UK and other Western governments still refusing to officially recognise the Taliban’s government, Afghanistan, which relied on foreign aid for about 80 percent of its government spending, remains isolated amidst of one of the worst humanitarian crises in the world.

“By making and flying kites in the Afghan tradition, led by Afghans who have made new lives in Europe, and open to all, we will be standing in solidarity with Afghans in the latest affront to their freedom and will remind the world of the devastating humanitarian crisis still taking place in Afghanistan today,” say Joe Murphy and Joe Robertson, the co-artistic directors at Good Chance Theatre.

Art Industry News: A British TV Show Will Vote on Whether to Destroy a Picasso Vase on Air + Other Stories