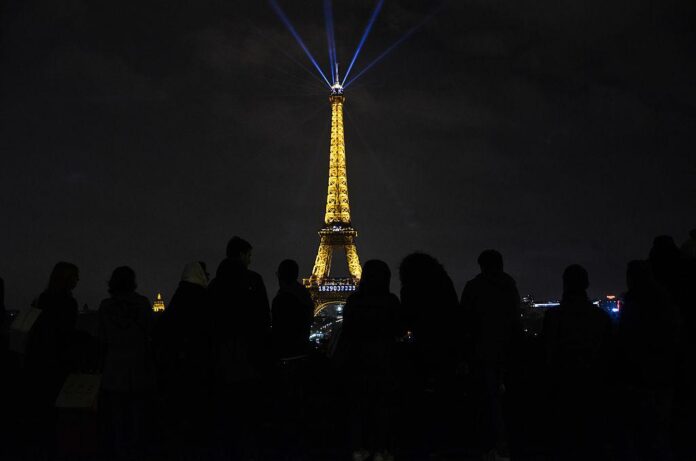 Last week, someone at Parisian gallery Lily Robert took to the business’s Instagram to post a picture of some graffiti that had been spraypainted onto the gallery’s facade.

“PRO RUSSIAN SCUM” and “DON’T SUPPORT NAZIS” were scrawled across the gallery’s glass doors in the city’s 18th arrondissement.

It may seem odd for a gallery to show off its own defacement, but it seems the owners don’t disagree with the remarks.

So how did we get here?

In April, Lily Robert mounted a group show titled “Certain Times,” which was organized by Ilya Smirnov, a Russian curator who has also worked with Alyssa Davis Gallery in New York and Moscow’s Money Gallery. Along with five other artists, the show included work by Dasha Kuznetsova, a Moscow-based artist who mainly works in multimedia paintings.

Kuznetsova was already a bit of a firecracker, having came under fire on social media earlier this year when Berlin-based critic Andrey Shental accused her of supporting the Russian invasion of Ukraine, alleging that she used swastikas and pro-fascist symbolism in her paintings. When “Certain Times” was announced, Masha Silchenko, a Ukrainian artist who had shown with Lily Robert before, messaged the gallery to see if they were aware of the allegations that Kuznetsova was a fascist.

“Dear Lily Robert Gallery,” she wrote over Instagram DM in late July, which she has since made public. “I hope you are aware that you are currently showing the work of an artist openly affiliated with the pro-war movement in Russia, and with far-right, fascist milieux more broadly.”

The response she got from the gallery’s Instagram account was laced in sarcasm: “We are shocked to come across this wicked knowledge of yours. Who might be this despicable villain of an artist you are referring to?” 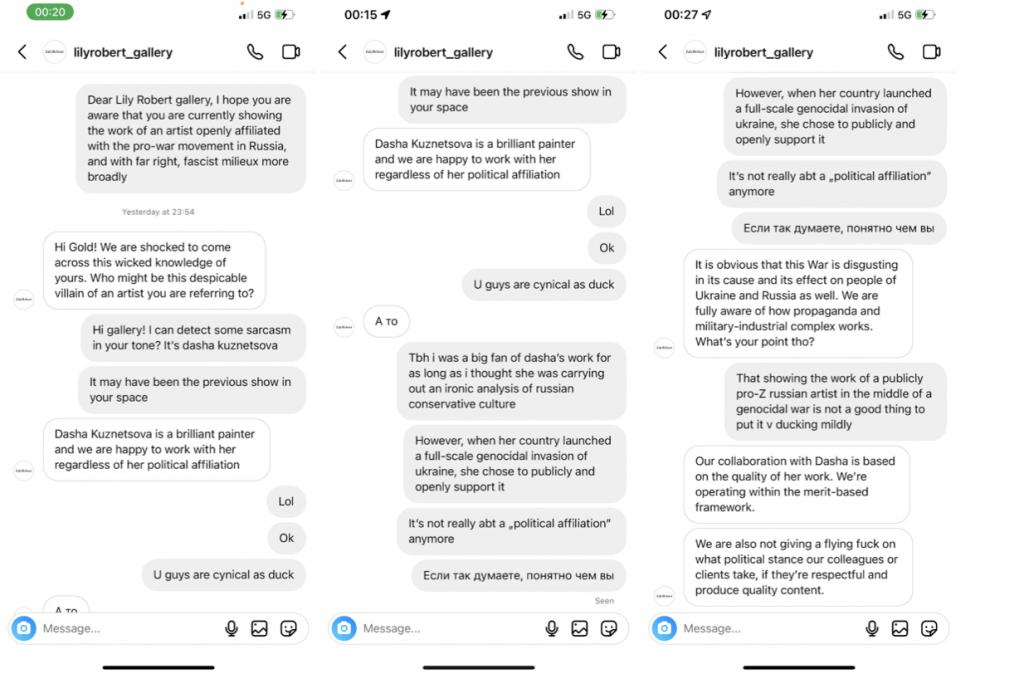 Screenshots of messages between Masha Silchenko and Ilya Smirnov, who was at the time using Lily Roberts Gallery’s account.

As it turned out, the responses—which rapidly descended into flagrant misogyny—were actually from Smirnov, who told Wet Paint he took over the gallery’s Instagram account to streamline communications between the gallery and those interested in the show. And the venom was quite toxic: Smirnov told Silchenko that all he wanted from women was oral sex, and that he did not “give a flying fuck” about the “political stances” of the artists in the show.”

“Our collaboration with Dasha is based on the quality of her work,” he wrote. “We’re operating within the merit-based framework.”

Contacted by Wet Paint, Smirnov first said he could neither confirm nor deny the statements, because he made them in a “dissociative” state. But he changed tack in a later Zoom call.

“I am obviously very sorry for the way this affects everyone around me,” he said. “It goes against all of my interests. But this happened nonetheless. I don’t know who is going to want to work with me after this. I was in kind of an ‘off state.’ The next day I woke up with a headache and I don’t remember.”

On August 2, Lily Robert kicked Smirnov out of its Instagram account, and released a full statement. “We wish to make official the total cessation of our collaboration with the curator Ilya Smirnov, whose motivations, political affiliations and the violence of the remarks he made were unknown to us until recently.”

No one at Lily Robert gallery could be reached for comment.

When high-caliber celebrities start to get their feet wet in the art-collecting world, they tend to play it safe by going straight to the top. For instance, Adam Driver reportedly showed interest in buying works by Yayoi Kusama from David Zwirner on the heels of his Star Wars success. Kendall Jenner was a moth to the Glimcher family flame, notoriously acquiring a James Turrell that she showed off during her Architectural Digest home tour. In other words, the celebrities who are inclined toward high taste use their status and wealth to head straight for the blue-chippers.

Nathan Fielder appears to be an outlier—and of course he is, since when has that guy ever gone the conventional route for anything? His new show, , is direct evidence that he likes to put in due diligence to a degree. For a while now, Wet Paint has been tracking the beloved comedian’s footprint in the New York art scene, and it goes deeper than you’d think.

The first time I heard that Fielder was making the rounds was back in 2018. A year after his earlier TV series, Nathan For You, wrapped, a friend of mine clocked him at a KATSU opening at the Hole, and a quick call to director Ray Bulman confirmed that he’s a frequent attendee of (pardon my French) openings at the Hole, though he has yet to pull the trigger on buying a piece.

Others saw him at a Richard Prince show at Karma a few years ago, and at a group show at Downs & Ross right before the pandemic hit. It included a mixed-media group show with works by Nadia Belerique, Cytter/Roebas, and Douglas Watt. My West Coast spies inform me that he’s even been spotted in several Los Angeles galleries, namely Sade, Kate’s Little Angel, and Human Resources (even hanging out at go-to art-world watering hole Melody’s Lounge after one opening at HR).

On Instagram, he follows a mere 120 people, but among them are Korakrit Arunanondchai, Eric Oglander, Jamian Juliano-Villani, Torbjørn Rødland, Genieve Figgis, and Chloe Wise. In fact, Jamian even confirmed to me that Fielder owns a couple of her works, which is enough evidence for me to confirm that he has interesting taste. (The thought of Nathan disaffectedly saying, “Oh, okay” to Jamian’s pitch for O’Flaherty’s next show is almost too much for me to handle.)

I reached out to Nathan by way of his PR reps, who told me he wasn’t interested in commenting. But if you’re reading this, Nathan, please come to more art parties. We’ll welcome you with open arms.

Critic Domenick Ammirati has a new Substack called Spigot, and in its first iteration, he took down Nahmad Contemporary’s buzzy new media show, “The Painters New Tools” … Juliana Huxtable is back after a long stint away from New York, and will be DJing in Brooklyn this weekend … A splashy, star-studded David LaChapelle retrospective is coming to Fotografiska next month … Not everyone is eschewing crypto—the Weeknd just purchased over $70,000 in NFTs by FVCKRENDER … Alteronce Gumby has joined Nicola Vassell Gallery …

Fran Leibowitz smoking a cigarette and looking befuddled outside Le Dive on a Tuesday evening, no doubt doing research for her take on the Dimes Square phenomenon *** A full stable of Glimchers—Marc, Arne, and Milly—along with Fairfax Dorn, Rashid Johnson, Robert Longo, and Kyle DeWoody at Ballroom Marfa’s summer party in Bridgehampton *** Jorge Pérez, Dominic Chambers, and David Rothschild at Lehmann Maupin’s dinner out in Aspen for Art Crush *** Is that a Marcel Dzama drawing in Sienna Miller’s charming English cottage?

Last week, I asked what the status coffee table book of this year was, and while I’m pretty sure my copy of the Cobrasnake Archive is pretty popular, Ricky Lee, who works as Petzel‘s director of communications, suggested in Emily Mae Smith‘s first-ever monograph, while Lauren Cody, who works at Sutton, suggested the sprawling .