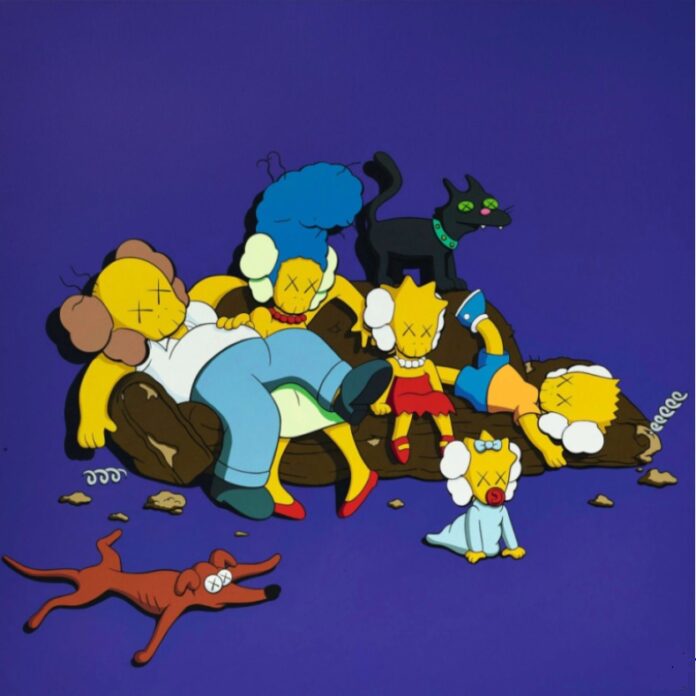 New Jersey–born artist Brian Donnelly, also known as KAWS, got his start as a street artist in the 1990s, and within the next decade, he went on to become a global sensation in the contemporary art world. Drawing his references from pop culture, KAWS is recognized for the cartoon-like imagery he deploys.

In the 1980s, Donnelly studied illustration at the School of Visual Arts in New York, later working as a cartoon animator for Disney. By the 1990s, he began experimenting with graffiti, painting over public commercial ads phone booths and bus stops in New York. Today, the artist is perhaps most known by his Companion character, which resembles a deformed and feature-less Mickey Mouse; he first conceptualized it during a collaboration with Japanese streetwear brand Bounty Hunter in 1999.

KAWS has infiltrated the world of luxury collectibles as well, manufacturing and selling his “Companion” sculptures in limited-edition releases undertaken in collaboration with fashion brands like Nike and Dior Homme. The toy “Companions” have helped to bridge the boundaries between street art, fine art, and fashion. He’s also done large-scale sculptures, including a 121-foot-long inflatable one for Hong Kong’s Victoria Harbor in 2019.

In recent years, KAWS’s ascent has earned him a widespread following—even if critics have often largely dismissed his art. Among those who have helped boost KAWS’s reputation are his collectors, who have helped the artist notch major records at auction. On the occasion of a Brooklyn Museum KAWS retrospective now on view, below is a look at the artist’s top sales at auction.

Made in 2003 as part of KAWS “Kimpson” series, this work, set against a dark blue background, is another sinister-looking reimagining of the family from The Simpsons. The piece sold in April 2019 at Sotheby’s Hong Kong during its “NIGOLDENEYE® Vol. 1” sale for a $2.2 million, against an estimate of $509,600.

Refigured characters from the popular family 1970s–’80s cartoon series The Fat Albert Show, each with their arms raised and their heads rendered with the artist’s trademark crossed out eyes, play starring roles in Untitled (Fatal Group), from 2004. The work became a big-ticket item at auction in November 2018, when it sold at Phillips New York during a 20th century art evening sale for $2.3 million, against an estimate of $700,000–$900,000.

The main character of Kurf (Hot Dog) is a version of a blue cartoon woodland creature from The Smurfs bearing the artist’s signature crossed out eyes. Here, he prepares to eat a hot dog, in a gesture that could be seen as intentionally crass. With its clean lines and its saturated palette, the painting is made to look commercially manufactured à la the artist toy designs. When it came up for auction in May 2019 at Sotheby’s New York location, it sold for $2.6 million, against an estimate of $1.5 million.

This work depicts a “Kurf,” or a Smurf character rendered via KAWS’s dry sense of humor, entangled in a neon green vine. The Kurf appears to be struggling to break free against a kid-friendly animated background, and it is an example of how KAWS has drawn on pop culture for his art. When the work sold at Christie’s New York in May 2019 during the house’s post-war and contemporary art evening sale, it came from a Californian private collection. It went for $2.7 million, far exceeding its estimate of $600,000.

Armed Away (2014), which debuted at Los Angeles’s Honor Fraser Gallery in an exhibition titled “MAN’S BEST FRIEND,” the year it was made, appears to be an abstraction, though a closer look reveals that it is loaded with barely recognizable imagery from the cartoon series Tom and Jerry. In appropriating and restyling images from pop culture, KAWS attempts to align himself with figures like Andy Warhol and Roy Lichtenstein. The painting sold in May 2019 at Christie’s Hong Kong venue during a contemporary art for $3 million, against an estimate of $1.6 million.

In the Woods depicts a reimagined, darker version of the familiar world inhabited by Disney princess Snow White. Referencing Donnelly’s early days as a Disney animator, the scene shows Snow White, surrounded by a group of doe-eyed forest animals and bearing KAWS’s menacing Companion-visage. The piece sold in May 2019 at Christie’s New York during their post-war and contemporary art day sale for $3.9 million, against an estimate of $1.5 million.

The Walk Home depicts SpongeBob SquarePants, from the eponymous kids’ TV show, screaming with his hands raised and surrounded by severed arms; his pupils are X’ed out. In May 2016 at Phillips New York, competing bids bounced between three specialists—Jonathan Crockett, Jean-Paul Engelen, and Miety Heiden—before landing with a buyer on the phone with Phillips chairman Robert Manley for a $5 million hammer price. With premium, the result was brought to $6 million—10 times the low estimate of $600,000.

Untitled (Kimpsons #1) was made as part of KAWS’s “Kimpsons” series, produced in collaboration with Japanese entrepreneur, street fashion figure, and art collector NIGO®. The work, featuring characters from the TV show The Simpsons, sold in October 2019 at Sotheby’s Hong Kong during its contemporary art evening sale for $7.4 million, against an estimate of $617,600.

In April 2019, at its Hong Kong location, Sotheby’s sold The KAWS Album, commissioned and sold by Japanese streetwear influencer NIGO, for a staggering $14.8 million, a new auction record for the artist and surpassing its high estimate of $1 million more than 14 times over. The Kaws Album riffs on a pop cultural image that is itself a riff on a pop culture image. Its reference point is a Simpsons still paying homage to the cover of theBeatles album Sgt. Pepper’s Lonely Hearts Club. “Brian has made it to the top and is one of the most famous contemporary artists in the world, which makes me so happy,” NIGO told Sotheby’s at the time.