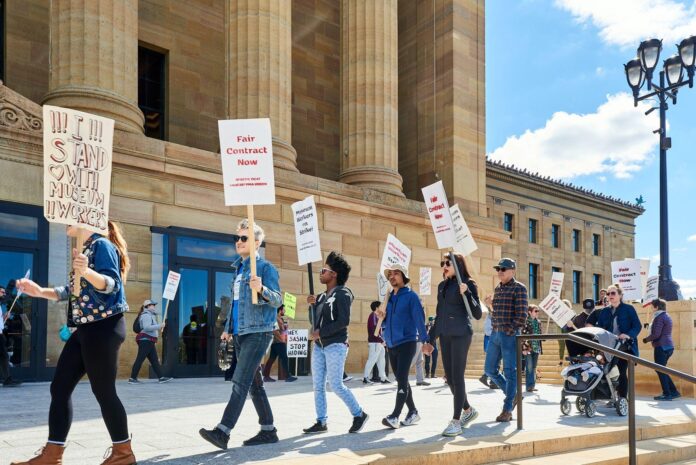 Unionised workers at the Philadelphia Museum of Art (PMA) returned to work on Monday (17 October), ending a three-week strike, after an overwhelming majority (99%) voted to ratify their first contract. The vote ended two years of negotiations between the union and museum administrators. Workers at the museum first began organising in 2019, successfully forming a union in the spring of 2020.

The ratified contract includes a number of items that were major priorities for union workers and will remain in effect until July 2025, at which time a new contract will be negotiated. The ratified contract includes four weeks of paid paternal leave, a 14% wage increase over the course of the life of the contract—the first raise taking effect retroactively from 1 July of this year–a reduction in the cost of healthcare packages many union workers use and the museum’s minimum hourly wage being raised to $16.75.

“We are all incredibly moved by the support we have received from the community, union siblings, city politicians, state politicians and the general public,” says Adam Rizzo, union president for Local 397 American Federation of State, County and Municipal Employees (AFSCME). “We are more united than ever and ready to keep fighting for positive change at the institution we love.”

The strike, which began on 26 September, coincided with the beginning of a new era for the museum, whose new director and chief executive Stacy Suda took the helm on 1 October. “I look forward to moving ahead as a unified institution at the service of its great city—and as a national and international destination for art,” Suda said.

The museum remained open throughout the strike, though visitors were forced to cross the union’s picket line in order to enter its building. And, in order to keep the opening of its major exhibition Matisse in the 1930s (20 October 2022-29 January 2023) on schedule, the museum hired non-union art handlers to install the show.

“The parties have met consistently over the past two years and have worked thoughtfully through the issues of the first contract. It is not uncommon for a first contract to take this amount of time,” a spokesperson for the museum told The Art Newspaper. “The PMA is very glad to have reached a tentative [collective bargaining agreement] with the union—director and chief executive Sasha Suda is eager to work with all to unite the full staff, focus on the future and draw the attention of Philadelphians and beyond to the once-in-a-lifetime exhibition, Matisse in the 1930s, which opens on 20 October.”

The prolonged contract negotiations prompted union members to hold a number of rallies earlier this year and to file several unfair labour complaints with the National Labor Relations Board (NLRB) in August before voting to authorise a strike. In mid September, the union held a one-day warning strike, which union members say resulted in a breakdown in negotiations. With a contract finally ratified, union workers and museum administrators hope both sides can move forward and resume their work.

“I’m excited and comforted from knowing that I’ll be walking back into the buildings alongside my union colleagues. I am lucky that I have a wonderful direct supervisor and I’m looking forward to seeing them again,” Nicole Cooke, programme manager for graduate academic partnerships at the museum and a member of the union bargaining team, said before returning to work on Monday. “I very much hope to be able to dive back into the work of the museum and collaborations with all of my PMA colleagues.”