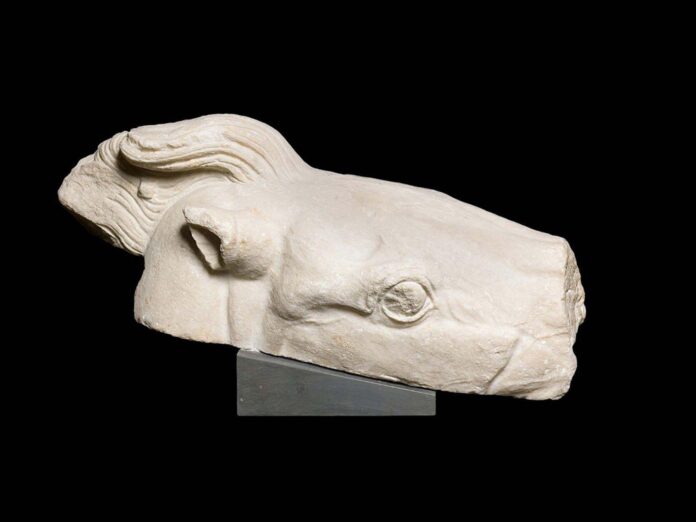 Pope Francis ordered the Vatican Museums to return the three Parthenon marbles held in their collections to Greece. In a statement today (16 November), Vatican officials referred to the works’ repatriation as a “donation” to Ieronymos II, the Orthodox Christian archbishop of Athens and head of the Greek Orthodox Church, and said it signaled “a concrete sign of his sincere desire to follow in the ecumenical path of truth”, according to the Associated Press.

The three sculptural fragments—part of the head of the horse pulling Athena’s chariot in the frieze on the west side of the Parthenon, and elements of the heads of a boy and a bearded man—have been in the Vatican Museums’ collections since the 19th century. They were most recently held by the Gregoriano Profano Museum, which houses the Holy See’s collections of antiquities. A timeline for their actual return to Greece has yet to be announced.

Pope Francis visited Athens a year ago, where he met with Ieronymos II and made a nighttime visit to the Parthenon. “History makes its weight felt, and here, today, I feel the need to ask anew for the forgiveness of God and of our brothers and sisters for the mistakes committed by many Catholics,” the pope said during his time in Athens, according to the Catholic News Agency.

The Vatican’s repatriation of its Parthenon marbles comes as pressure is mounting on the British Museum to return its holdings of the marbles, far and away the lion’s share of the 5th century BCE sculptures. Earlier this month it was revealed that secret talks between the British Museum and Greek officials seemed to be progressing, with a possible deal to send the marbles to the Acropolis Museum as early as next year.

Beginners’ Guide: How To Design Your Room