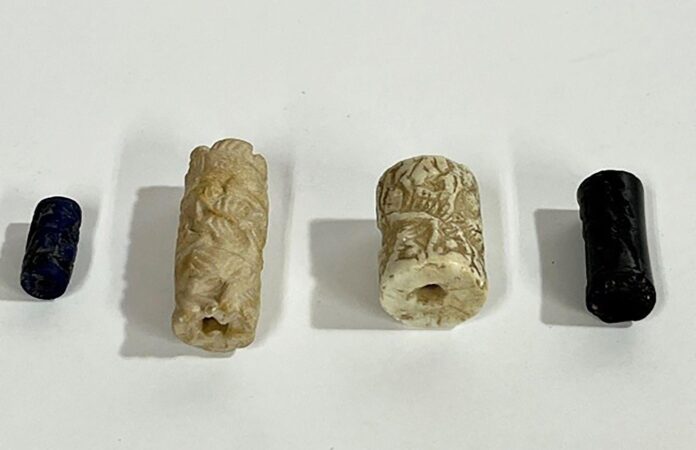 Investigators in New York have returned seven Mesopotamian and Neo-Babylonian seals to Iraq, nearly 20 years after they were stolen from the Iraq Museum in Baghdad. The antiquities were taken after US forces invaded Iraq in 2003, which led to widespread and unchecked looting and destruction of not only the national museum but also archaeological sites.

The Manhattan District Attorney’s office, which conducted the investigation with Homeland Security Investigations (HSI), revealed the seals during a repatriation ceremony on 14 December. The group includes four cylinder seals and three stamp seals with carvings of gods, human figures, animals and other scenes of worship.

“These items were looted by thieves taking advantage of the confusion of war to turn a profit with total disregard to their cultural value,” Ivan J. Arvelo, a special agent with HSI in New York, said in a statement. “These artefacts date from as far back as 2700 BCE and were a critical part of everyday life in the ancient world. Now, they will return to their rightful home.”

The seals were smuggled into the United States shortly after they were stolen, and between 2004 and 2009 were purchased through various galleries and online auctions by a private collector. In March of 2021, one appeared for sale in an online auction, leading investigators to discover that the consignor owned six others that also lacked documentation to confirm that they entered the art market prior to 2003.

Douglas Cohen, a spokesperson for the district attorney, tells The Art Newspaper that the tip came from an informant who had read Thieves of Baghdad (2005), a book by assistant district attorney Matthew Bogdanos about his experience trailing stolen antiquities. Cohen declined to share the names of involved collectors, auction houses and galleries.

The seals are among the estimated 15,000 antiquities stolen from the museum during the war. While some have been returned—the Mask of Warka, also known as the Sumerian Mona Lisa, found in September 2003 in a farm near Baghdad, is one high-profile example—Cohen says more than 4,000 have yet to be recovered.

“Very little of the material has ever come to the United States, which means we obviously cannot prosecute,” he adds. It can also be difficult to prove that items were looted from the Iraq Museum, archaeologist Oya Topçuoğlu told The Atlantic in 2018, in part because many were located in storage and had yet to be inventoried and numbered.

The Iraq Museum reopened in 2015, more than a decade after the US-led invasion, but closed again in 2019 amid anti-government protests and the Covid-19 pandemic. After a three-year hiatus, it began welcoming visitors once more in March 2022.

Archaeologists Have Discovered One of the World’s Oldest Pieces of Narrative Art, and It’s NSFW