Home News Possibly the Oldest Pair of Levi’s Jeans, Salvaged From an 1857 Shipwreck,... 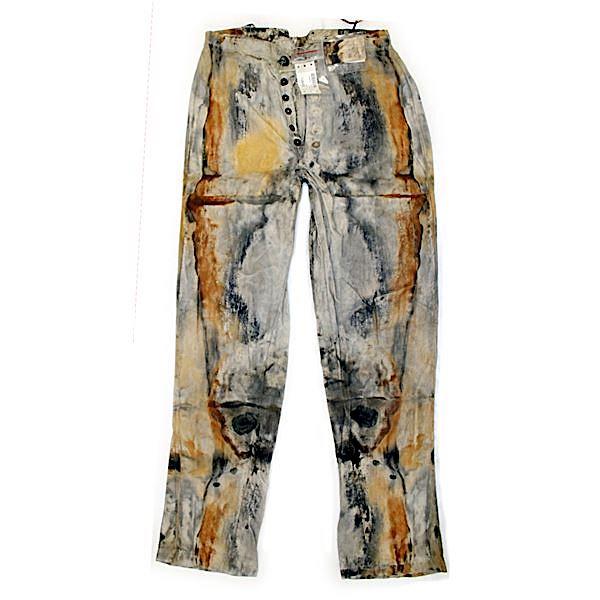 Vintage bank notes, gold nuggets, and jewelry were among 550 treasures from the 1857 S.S. Central America shipwreck that went to auction with Holabird Western Americana Collections in Reno this month. Final prices across their multi-million-dollar sale ranged from $48 for a collection of books about treasure (estimated $80–$100) to $1,080,000 for gold from the vessel’s treasure box (estimated $1,800,000–$2,500,00).

However, a salvaged pair of miner’s pants from Mexican-American war veteran, merchant, and possible gold rusher John Dement stole the show, pulling in a total of $114,000—more than double their $50,000 estimate. Holabird said the trousers could be the earliest known example of Levi Strauss craftsmanship. Gold from the S.S. Central America has appeared at auction before, but this is the first time its artifacts have been sold.

The 280-foot S.S. Central America had made 43 successful trips by September 1857, when it departed Panama for New York City carrying 477 passengers, 101 crew members, and 30,000 pounds of precious metal from the California gold rush. After one stop in Havana, a hurricane shredded its sails and flooded its decks. Only 153 people survived.

Marine engineer Tommy Thompson raised $12.5 million from 161 private investors to fund the expedition, which first surfaced coins from its wreck off the Carolina coast in 1988. Thompson was prosecuted in 2005 for shorting investors of their shares. The thousands of gold bars, coins, and relics he unearthed were only five percent of the loot.

someone gonna be cruisin into the club like a 1857 shipwreck

The Odyssey Marine Exploration has recovered thousands more S.S. Central America relics since 2014, led in part by Bob Evans—Holabird’s Chief Scientist and Historian, who’s worked with the wreck since 1983.

Dement survived the sinking, but the New York Times noted the clothes-stuffed trunk he brought aboard wasn’t rescued until 1991. It appeared in this month’s sale alongside another trunk from passengers Ansel and Addie Easton. Both trunks, “made of heavily tanned leather, landed intact and unbreached in the debris field,” Evans wrote in the catalog.

The contents of Dement’s trunk, sealed without oxygen, were miraculously preserved—including his work pants, crafted from a hardy, unknown material splotched with dark stains. Although Levi Strauss patented their first blue jeans in 1873, Holabird says Dement’s pants could prove an even earlier example. “The texture of the material coupled with what appears to be a relatively unique fly button size and style immediately led me to think of Levi Strauss,” Evans noted in the catalog.

There, he tracked Strauss’s western dry goods business throughout the 1850s using gold records, but one Levi Strauss archivist reminded the New York Times that Evans’s attribution is still speculation, citing the pants’ light hue, lack of suspender buttons, and unusual fly as contradicting evidence. But at least one bidder appears to have believed the theory, based on the garment’s coup at the block.

This month’s sale was only the first part of Holabird’s S.S. Central America offerings. Part II runs February 24 through 26.