Home News ‘Promoting Korean Soft Power Is the Most Important’: How Korean Corporations Are... 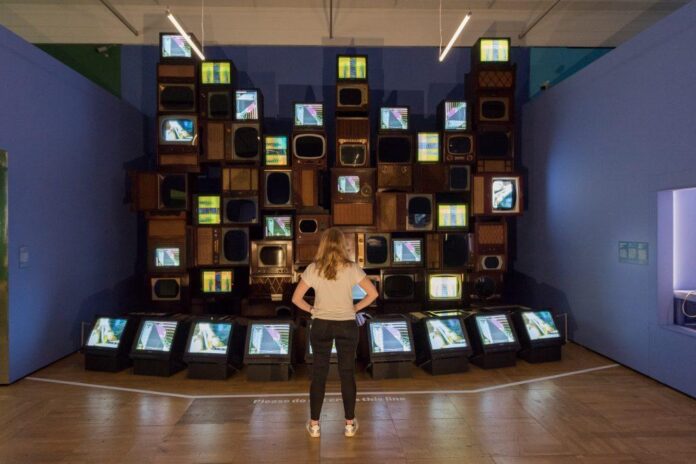 First, there was the frenzy surrounding the Frieze Seoul launch. Then there are major exhibitions of Korean art and culture staged at leading institutions such as the Los Angeles County Museum of Art (LACMA) and London’s Victoria and Albert Museum (V&A), which opened not long after a Korean arts festival at a nearby theater. From Netflix and K-pop to top museums around the world, Korean culture is everywhere, literally.

The abundance of Korean culture on the global stage is no coincidence. It is, in fact, the fruit of a long concerted effort spearheaded by the South Korean government following the installation of democracy in the late 1980s, with tremendous backings from the country’s major corporations, or , the massive family-run business conglomerates established in the first half of the 20th century exerting great influences on the country’s economy, politics, and now the global promotion of Korean culture through vast sponsorships and investments. It first began with the cinema, TV dramas, and K-pop, and then extended to the arts.

“Many Korean conglomerates saw the economic growth of the 1960s to ’80s not only as a way to make a profit, but also as a way to put Korea on the global stage and leave behind the scars of colonization and the pain of division,” Ramon Pacheco Pardo, the head of department and international relations professor at King’s College London, told Artnet News.

Economic benefits such as boosting exports, attracting investments, and bringing in tourism are among important factors motivating these corporations to sponsor art programs globally, noted Pacheco Pardo, who has recently published his book . But there’s more to it. 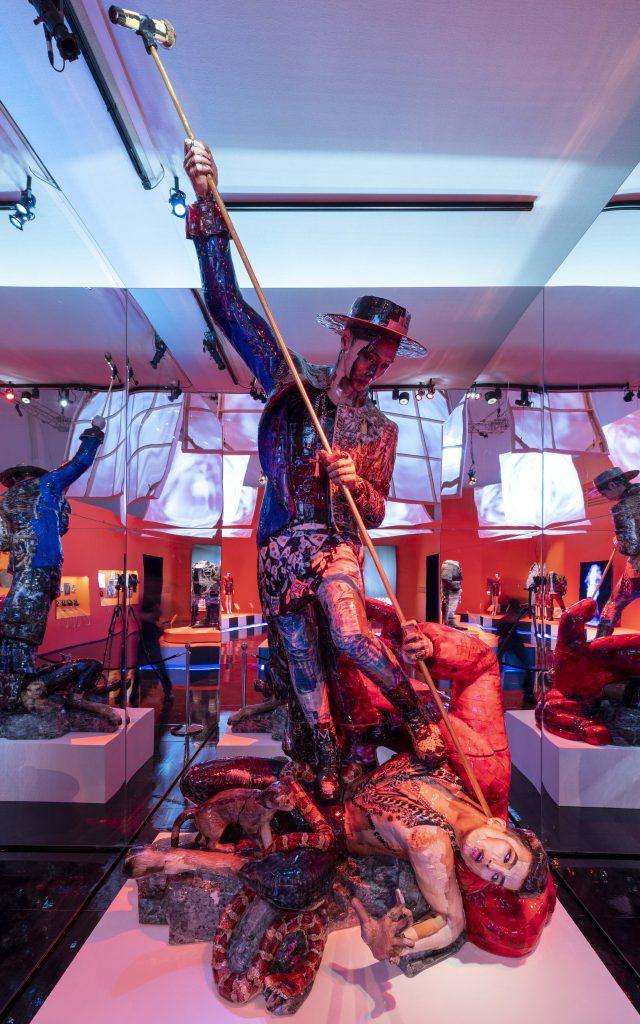 The names of chaebol are no strangers to the international art scene in recent decades. Tech giant Samsung, for example, supported London’s first permanent gallery devoted to Korean arts at the V&A in 1992. It has been in partnership with the British Museum since 2009 to develop a digital learning program free for schools and families through the Samsung Digital Discovery Center (SDDC); it also sponsored the Nam June Paik retrospective at Tate Liverpool in 2010, citing that it provided 1,003 monitors for Paik to create the three-channel video installation for the 1988 Seoul Olympics. It remains one of the most active sponsors for the arts today, including a recent sponsorship for “Park Dae Sung: Virtuous Ink” at LACMA.

Other chaebol that have been generous with global art sponsorships throughout the decades include cosmetics company AmorePacific, which in 2011 donated $1 million to LACMA for the acquisition of contemporary art over the following five years, followed by a £500,000 (U$667,000) donation to the British Museum in 2017; retailer Shinsegae, entertainment giant CJ Group, and shipping giant Hanjin (which went bankrupt in 2017) are among some of the key art sponsors.

Fast forward to 2022, these mega Korean conglomerates are only becoming more active than ever. In June this year, fellow tech giant LG Electronics announced a five-year partnership with the Guggenheim with a focus on tech-based art, involving the launch the LG Guggenheim Art and Technology Initiative, a $100,000 art prize, the sponsorship of the employment of an assistant curator, and the Guggenheim’s annual Young Collectors Council party. It has also backed the V&A “Korean Wave” exhibition. 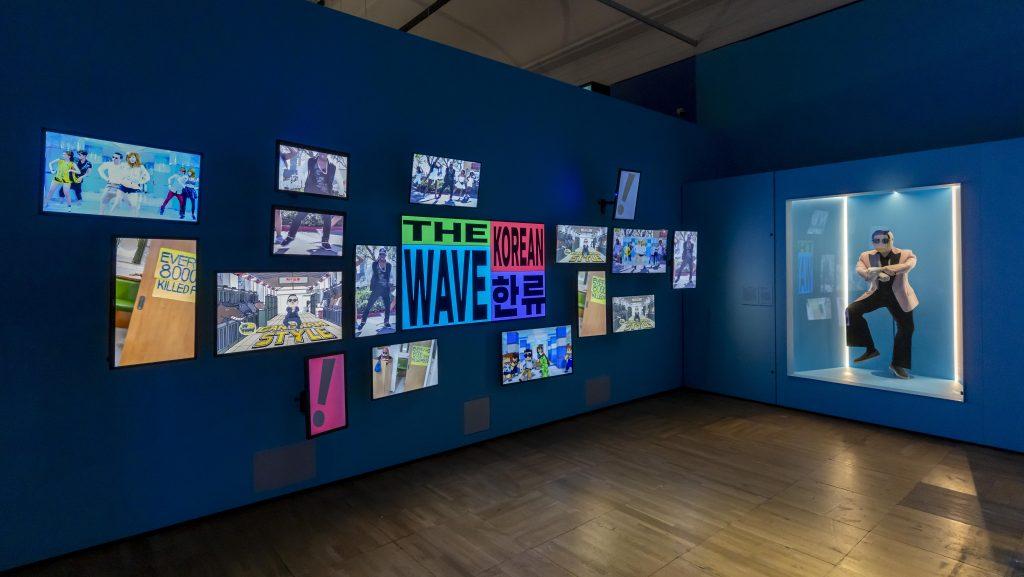 Installation image of exhibition introduction with PSY’s Gangnam Style at ‘Hallyu! The Korean Wave’ at the V&A. Ⓒ Victoria and Albert Museum London.

Taking the center stage this season is South Korean car maker Hyundai Motor, which is behind the exhibition “The Space Between: The Modern in Korean Art” (which also has sponsorships from Samsung) that runs through Feb. 19, 2023 at LACMA, as well as Chilean artist and poet Cecilia Vicuña’s site-specific work at Tate Modern’s Turbine Hall unveiled during the Frieze week as the annual Hyundai Commission. V&A’s recent hit show “Hallyu! The Korean Wave” is backed by Korean luxury car brand Genesis, a division of Hyundai Motor.

“‘Hallyu! The Korean Wave’ at the V&A is the first arts and culture show Genesis has sponsored,” Andrew Pilkington, director of Genesis Motor U.K., told Artnet News via email.

The V&A exhibition, through June 25, 2023, features more than 200 objects charting the rise of Korean pop culture over the past two decades, from the early renditions of TV dramas to K-pop, internationally acclaimed cinema titles, and Netflix hit show Squid Game. Fashion and beauty are also among the topics.

The show also attempted to contextualize the rise of Korean pop culture against the backdrop of the wounded history of the Korean peninsula, from Japanese occupation to the Korean War, and South Korea’s painful road to freedom and democracy—a key factor for the country’s thriving creativity, according to the exhibition’s curator lead curator Rosalie Kim.

From a sponsor’s perspective, particularly a young brand such as Genesis, this is the right opportunity, noted Pilkington, adding that V&A has been collecting Korean art and design since 1888. “Hallyu has transformed South Korea’s image to that of a leading cultural powerhouse—a culture that Genesis is proud to support and continue to raise awareness,” he said, calling the new relationship with the V&A for an undisclosed amount a “perfect synergy” with the luxury car brand. 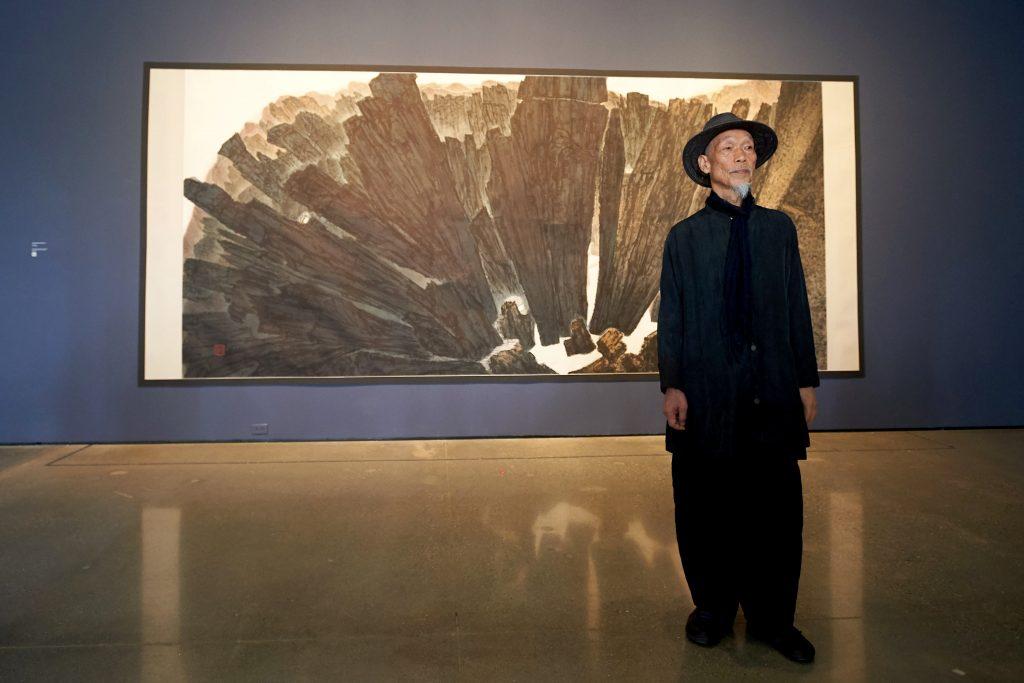 “It’s Not Just About Money”

Hyundai Motor has been among the most ambitious in the global art scene in the past two decades. It began to forge long-term partnerships with leading institutions around the world in 2013. The chaebol in 2014 ink a 11-year deal with Tate for the annual Turbine Hall commission. It is the “longest initial commitment a corporate partner has ever made to Tate,” according to a spokesperson of the U.K institution. Tate declined to reveal the amount of the sponsorship while refuting the reported £5 million ($8 million, as per historic exchange rate) worth of the deal being not true. A number of these ongoing initiatives are documented in its digital channel Hyundai Artlab.

LACMA’s long-standing relationship with Hyundai Motor could be traced back to 2013, when the museum’s CEO and director Michael Govan revealed the plans for the museum’s new building by Swiss architect Peter Zumthor, he recalled. And the chaebol sponsored the exhibition at the time. Although LACMA has a “very keen interest in collecting Korean art” since the then Korea’s first couple gifted the museum 23 ceramic works less than a year after it opened in 1965, Hyundai’s first step was not centered around Korean art, but the design of the new museum building.

“That was where we first connected globally,” Govan told Artnet News over the phone. The partnership with Hyundai Motor, as well as other other Korean conglomerates, has been one that “made sense locally” because of the large Korean population in Los Angeles, Govan noted. The Los Angeles-Long Beach-Anaheim metropolitan area recorded a total of 211,000 population of Korean immigrants between 2015 to 2019, the highest concentration in the U.S. “It is true if you drive near my old house, it’s like, the signs are in Korean.”

Two years after the first collaboration, LACMA inked a 10-year “millions of dollars” worth partnership deal with Hyundai Motor under the umbrella of The Hyundai Project through 2024, covering two major initiatives, Art + Technology and Korean art scholarship, which gave birth to the 2019 exhibition “Beyond Line: The Art of Korean Writing” dedicated to the evolution of Korean calligraphy.

LACMA has been actively cultivating its deep relationship with Korean corporations as well as cultural organizations since Govan took helm of the museum in 2006. These partnerships “are not just about money,” he noted, but “friendships and connections.”

He cited the case of Michael Heizer’s 340-ton granite megalith (2012), which couldn’t have been possible to move without the help of shipping giant Hanjin at the time. “They were friends and I went to them to help sponsor moving this giant rock,” he recalled.

“I have found that our relationships with Korea and Korean companies have been very normal, respectful…It’s been perhaps the most comfortable back and forth with companies where they’re listening to what we want to do, and we listen to what they want to do.” 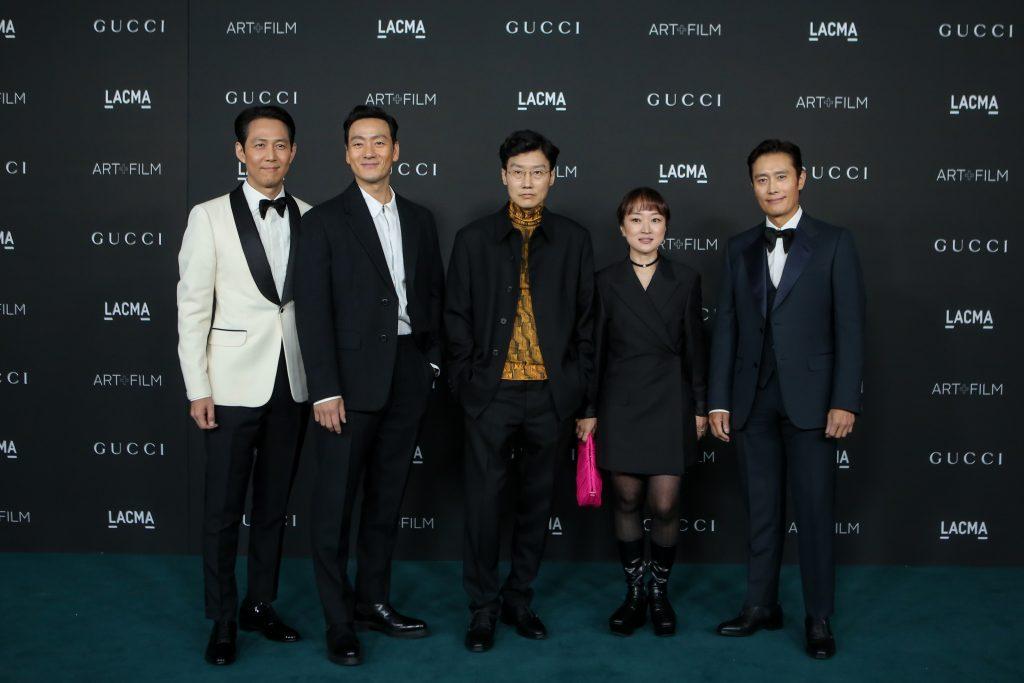 Looking back, Govan didn’t expect today’s explosion of Korean culture worldwide when he began building these relationships. “Korean celebrities are more famous than American celebrities. Honestly, we got more press for our gala last year, in part because the cast of Squid Games came,” he noted.

But to Govan, perhaps the biggest takeaway of these decade-long relationships is the Korean conglomerates’ savviness in the global cultural space. “Korean companies have been very interested in using the cultural space as a way to become known as soft power. You present the culture in a way that is culturally sensitive and a contribution to everybody’s education rather than simply branding. I just find it very intelligent,” he said, adding that “most corporations don’t understand the huge power of being involved in cultural organizations globally.”

Chaebo’s enthusiasm in the cultural sphere is in-line with the vision of the Korean government. According to a wall text of V&A’s “Korean Wave” exhibition, the Korean government’s active support for culture began when it noticed the box office success of Jurassic Park in 1994, which “outperformed [the sales] of 1.5 million Hyundai cars.” The initial support for the film industry then attracted the Korean conglomerates and other private investors to join the field, and this gradually extended to other cultural sectors. 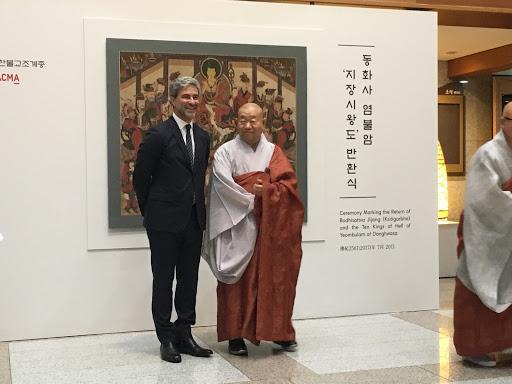 LACMA Director Michael Govan and Venerable Monk Jeong-hyun a ceremony for the restitution of a Buddhist artwork in Seoul, Korea, 2017. Courtesy of LACMA.

The recent V&A exhibition, in fact, is part of a 2 billion won ($1.65 million) agreement between the state-run Korean Cultural Center in London and the London museum signed in 2020 to boost the museum’s programs and research related to Korean art and design in a five-year period. It also signed a new 10-year agreement with the British Museum in 2021. This year, the Ministry of Culture, Sports and Tourism announced a 220 billion won ($154 million) budget to boost Korean arts and culture locally and abroad.

Jungwoo Lee, director of Korean Cultural Centre U.K., noted the success of Korea’s cultural diplomacy has successfully crafted a new image for the country, directing foreigners’ attention from issues related to North Korea and nuclear threats to focusing on culture.

“I’m surprised that people know more [about Korean culture] than me,” he told Artnet News over the phone, adding that the center will continue to program Korean cultural activities ranging from art to K-pop and language courses.

“Promoting Korean soft power is the most important, and under such a framework, we will continue to work with world leading institutions,” Lee said.

A Year After ‘Pillar of Shame’ Was Removed From Hong Kong University, the Monument’s Artist Has Initiated an A.R. Campaign Calling For Its Return