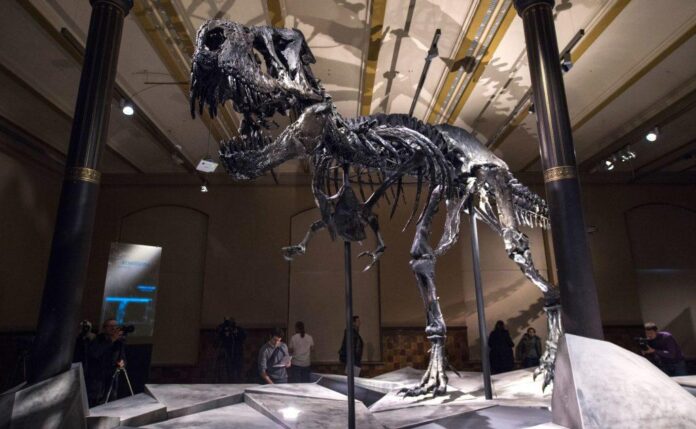 Over the weekend, activists staged demonstrations at two Berlin museums, citing the government’s lack of action to address the climate crisis.

At Berlin’s Natural History Museum, two women wearing orange reflective vests glued themselves to the handrails surrounding a dinosaur skeleton on display, with a banner that read “What if the government doesn’t have it under control?” They explained their actions to the exhibition’s visitors, according to the Associated Press.

The activists, members of the German group Last Generation, were identified as Caris Connell, 34, and Solvig Schinkoethe, 42.

Two environmental activists glued themselves to a dinosaur display at Berlin’s Natural History Museum on Sunday to protest what they said was the German government’s failure to properly address the threat of climate change. https://t.co/XdpvDPWSMF

“This peaceful resistance is the means we have chosen to protect our children from the government’s deadly ignorance,” said Schinkoethe, who is a mother of four. “Unlike the dinosaurs,” added Connell, “we hold our fate in our own hands. Do we want to go extinct like the dinosaurs, or do we want to survive?”

Meanwhile, on Sunday across town, authorities were alerted to an incident at the Alte Nationalgalerie, where protesters threw fake blood at a famous Henri Toulouse-Lautrec painting, , which was covered in glass, before supergluing themselves to the wall next to the work. The culprit’s hand was removed from the wall, and they were taken into custody, according to museum officials.

Hermann Parzinger, the head of the Prussian Cultural Heritage Foundation, said he was “appalled by this further senseless attack on art, which in this case apparently can’t be attributed to any group active in climate policy,” according to the German outlet dpa

The protest comes on the heels of a spate of recent actions including one on October 23 when two Late Generation members threw buckets of mashed potatoes at Monet’s (1890) at the Barberini in Potsdam, Germany. Other activists from groups Just Stop Oil and Extinction Rebellion, have affixed themselves to artworks with superglue, thrown tomato soup, and even thrown cake at famous artworks in order to draw attention to the climate crisis.