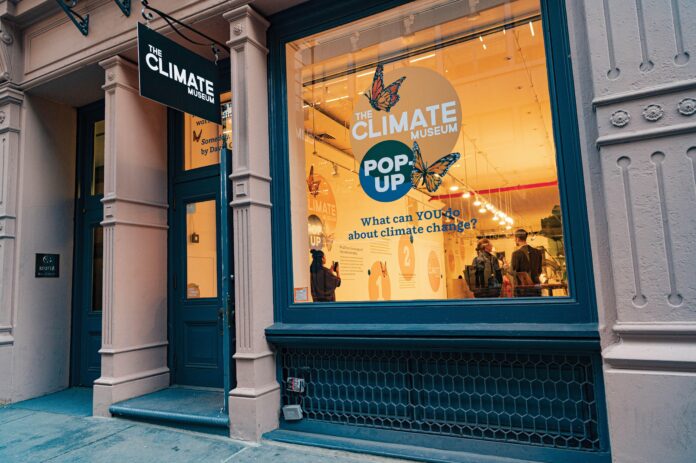 As parts of the art world continue efforts to reduce their ecological footprint, the Climate Museum is marshalling the power of art to educate the public and motivate change. The museum launched its first-ever Manhattan pop-up space last month with an action incubator and mural by David Opdyke. On view until 22 December, the pop-up aims to generate interest in the museum’s mission and help fund a permanent home.

The museum was founded in 2015 by the former civil rights lawyer Miranda Massie; its public programming and exhibitions launched in 2017. Since then, the museum has organised installations and exhibitions in and around New York, including pop-ups on Governors Island in 2018 and 2019.

At a time of eroding trust in many traditional institutions, Massie created the museum to leverage support for cultural spaces in order to promote learning and climate action. “Museums are trusted and popular, and the arts reach people how we most need to be reached: emotionally and communally. There’s an urgent need for a shift toward climate dialogue, expression and engagement. Without this cultural shift, we won’t get the transformational policy that’s needed to safeguard our well-being and all the things we love,” she says.

Such a cultural shift includes an effort to debunk the belief that Americans are indifferent to climate policy. “There is a misperception recently identified by researchers that only one in three Americans support bold climate policy, when the actual number is two in three,” Massie says. The pop-up at 120 Wooster Street includes wall text about the origins of perceptions about climate indifference and ways to promote action. The museum is hosting public panels and workshops addressing climate justice, art, science, migration and activism, among other topics.

Opdyke’s mural, Someday, all this (2021), invites visitors to consider the consequences of inaction. It features 400 vintage postcards of American landscapes that the artist has embellished with apocalyptic imagery such as skyscraper-sized caterpillars, and tentacles and vines crushing buildings, as well as indicators of related humanitarian crises such as signs with the phrases “no climate refugees” and “send them back”, allusions to humans fleeing to Mars and several cruise ships named “Ark”. The postcards are arranged so that, viewed from a distance, they resemble pixels in a photograph of a landscape that is splitting apart.

The exhibition marks a significant step toward the museum’s goal of establishing a permanent space. So far, Massie says, the Soho pop-up has been well-received. “Visitors have taken hundreds of silence-breaking actions and committed to hundreds more, and people are leaving determined to spread the word that there’s a supermajority for bold climate action in the US,” she says.

As for a potential permanent space, Massie envisions a vibrant centre for engagement, dialogue and action. The museum will continue to support climate-related programmes at other institutions, as well as pop-ups and public installations beyond its future home.