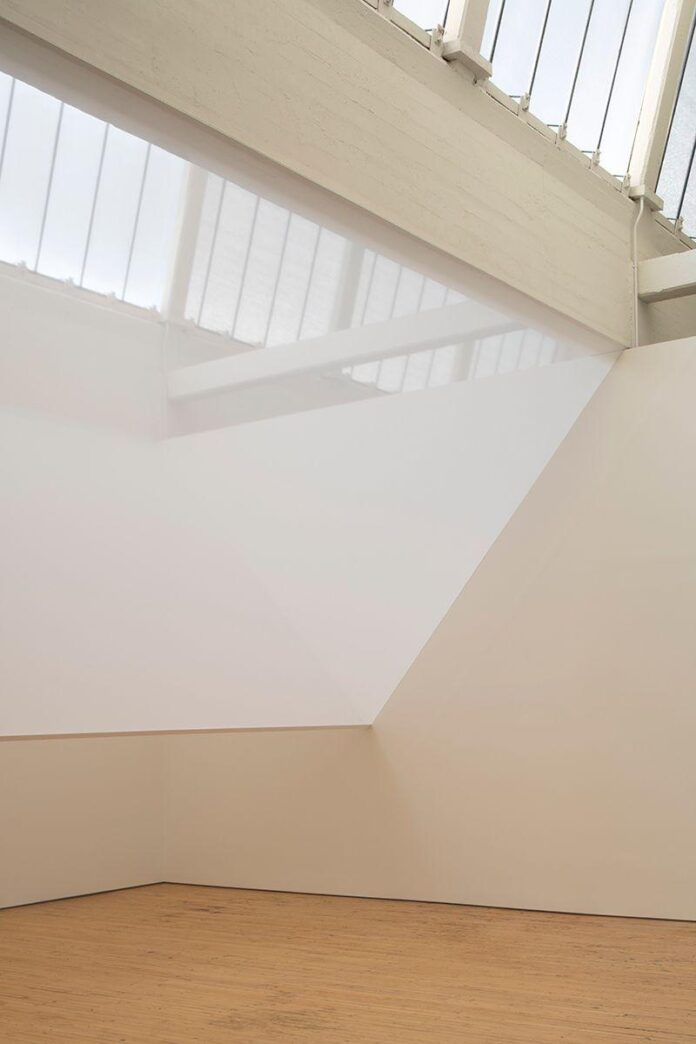 The Dia Art Foundation has unveiled one of its latest acquisitions by the seminal American Light and Space artist Robert Irwin at its Hudson Valley complex in Beacon, New York, where it will remain on view until the end of 2024.

Suspended between the floor and ceiling, Irwin’s Full Room Skylight – Scrim V (1972/2022) comprises two sheets of translucent fabric stretched in a “V” shape across two connected galleries. From overhead, the fabric is illuminated by abundant natural light beaming through the skylights, both concealing and revealing the surrounding architecture depending on variables such as brightness, time of day and the viewer’s vantage point.

Irwin’s installation and its optical characteristics are influenced by his selection of material. He discovered scrim, the fabric chosen for the work, during a trip to Amsterdam in 1970. A woven fabric, scrim both reflects and transmits light, appearing opaque until lit from behind. Due to its unique properties, it is often used in theatre productions as a screen or backdrop. In a statement, Irwin says he was attracted by its “defocusing element” and capacity to make spaces appear “either ambiguous or razor sharp”.

“I think it’s important because it’s an incredibly significant part of Bob’s works,” Dia director Jessica Morgan tells The Art Newspaper. “The scrim pieces are the first works where he’s materially investigating space in a manner that is so withdrawn, and so refined, and yet so impactful.”

Upon entering the gallery, Irwin’s creation seems unremarkable at first glance; but once it draws you in, it becomes apparent that this is a work that rewards time spent looking closely. Looking up toward the skylight and walking around, underneath and alongside the installation, the sheets begin to shimmer in the afternoon sun. In optimal lighting conditions layering two scrims, as Irwin does here, can also create a moire effect. As clouds pass above, the gallery slightly dims, partially obscuring the architecture and creating an illusion that momentarily disorients the viewer. It’s remarkable to think that in different light, for example in the winter months, the whole experience will be different.

“You see it, and then you don’t see it, and you have to figure it out,” says Donna De Salvo, Dia’s senior adjunct curator for special projects. “The viewer’s process of developing their individual perception is what Irwin wants. Works like that that are often the most rewarding because there are some artworks that you get right away and then you walk on. But you cannot do that with this, and you don’t want to.”

The work was originally commissioned by Harvard University’s Fogg Museum in Cambridge, Massachusetts in 1972 (where it was titled Full Room Skylight – Scrim V – Fogg Museum, Harvard), but at Dia Beacon the artwork is installed in its ideal location, a space Irwin personally designed.

Between 1999 and 2003 the artist lived in Beacon, and spent his time transforming the former Nabisco box printing factory into an artwork in and of itself. Beacon Project (1999-2003) comprises Irwin’s subtle interventions to ensure that the building’s vast galleries are lit entirely by natural light, and that the floorplan presents artworks in an even, non-hierarchical order.