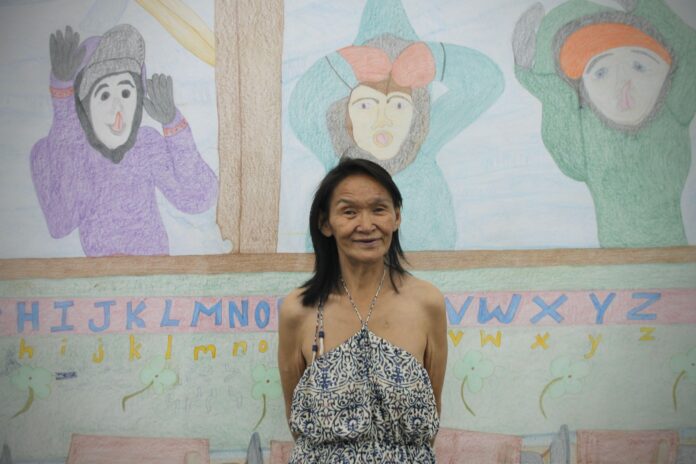 Fresh from the Venice Biennale, where she received a special mention for her work in the group show Milk of Dreams, the Inuk artist Shuvinai Ashoona opened a new show this month at Vancouver’s Marion Scott Gallery titled Inside Out. Under a sky clouded by smoke from wildfires that have for months plagued Canada, and punctuated by an orange sun, Ashoona recounts a dream she had the night before the opening on 10 September. “There was a wolf following me—it was scary. I was with my mother, and we tried to climb the mountain, but it melted beneath our feet,” she says.

She says that the dream will inspire her new work, including geometric mobiles that will be displayed at Art Toronto next month with work by the artist Laakkuluk Williamson Bathory. Whether the predatory wolf in her dream was climate change or the looming possibility of international art world success remains to be seen.

Ashoona, from Cape Dorset—now called Kinngait—in Canada’s northern province of Nunavut, comes from a family of celebrated artists. Her parents were the sculptor Kiugak Ashoona and the graphic artist Sorosilooto Ashoona. She is a cousin to the late artist Annie Pootoogook and her grandmother, Pitseolak Ashoona, was one the most celebrated Inuk artists of her time. But now it seems that after decades of honing her unique style of drawing, which marries intricate graphic detail with Inuit cosmology, the 61-year-old Ashoona is on the verge of overnight success.

Before Ashoona’s recent Venice award, the artist—whose dense, often phantasmagorical work plays with scale, perspective and recurring images like the egg shape, the kudlik or stone oil lamp and the ulu, a semi-circular blade—was the 2018 recipient of the prestigious Gershon Iskowitz Prize at the Art Gallery of Ontario (AGO). The award, which is presented annually to an artist who has made an outstanding contribution to the visual arts in Canada, includes a $50,000 cash prize and a solo exhibition at the AGO within two years.

Then came her show at the Institute of Contemporary Art in Miami that opened last November, which marked not only her first museum show in the US but also the first American contemporary art museum show featuring any Inuit artist, who have historically been confined to the realm of anthropology.

After the Canadian multimedia artist Stan Douglas’ success at Venice this year, “I could see [Ashoona] becoming the next official Canadian artist there”, says Robert Kardosh, a gallerist at Marion Scott, who has long championed the artist, who is represented by the West Baffin Eskimo Cooperative. “We get weekly calls now asking her to headline biennales.”,

There is already much interest in Ashoona’s relatively underpriced work on display at Inside Out. The show reprises many previously shown works, spanning from 2007 though 2019 all being exhibited in Canada for the first time. But while her earlier pen and ink drawings still have appeal, two large new drawings made with coloured pencils, which she began to experiment with in 2000, steal the show. The largest one, at 50 in. by 93.75 in., depicts children looking inside a classroom from a snowy landscape, their noses pressed up against the window as Inuk and English alphabets hover above their desks, their futures firmly tied to education. A smaller drawing from 2021 and also made with coloured pencil, ink and graphite on paper features a group of Inuit embracing, devouring, and even birthing a fantastical creature that is part whale, walrus and octopus. The striking work shows the Inuit connection to nature that underscores so much of Ashoona’s art.

As she works away in the Granville Island studio on drawings that will become geometric mobiles – amplifying the already multi-dimensional quality of her style into actual three dimensions, a semi-finished piece in the shape of a cone stands out. On one edge, a Baffin Island mountain is depicted with the words help us spelled out in stone, speaking to the plight of a people who stand between the colonial damage of the past and the current ecological disaster. But staring intently into the abyss of blank paper as the acrid air moves into the studio, Ashoona just keeps on drawing, a seemingly shamanic act that might just help ward off the wolf of climate change.