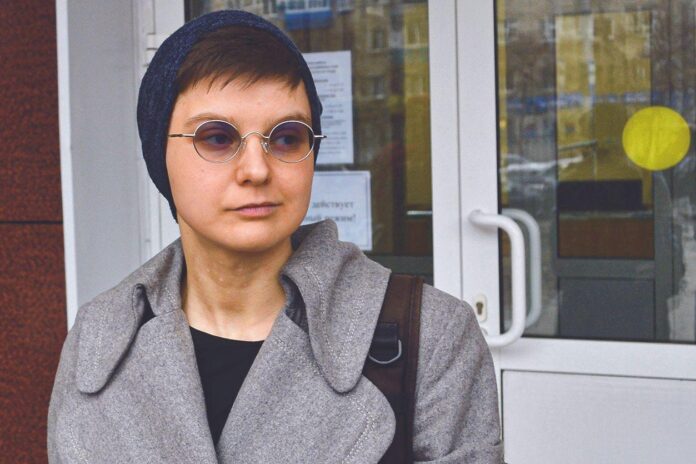 The artist Yulia Tsvetkova spent more than three years fighting a Russian prosecutors’ campaign to imprison her on pornography and “gay propaganda” charges for posting body positive feminist images on social media. Last year Russian artists donated works to a Moscow auction to raise money for her legal defence when she faced up to six years in prison. But there was no time to celebrate after a court in Komsomolsk-on-Amur, the military-industrial city in Russia’s far east, upheld her acquittal on 22 November 2022.

Tsvetkova and her mother, Anna Khodyreva, realised they had to leave Russia immediately after the ruling before a sweeping new law was signed on 5 December by President Vladimir Putin banning dissemination of “LGBTQ propaganda” that promotes homosexuality in the public sphere, via the internet, in advertising, books and film, punishable with fines of up to 10m rubles ($158,000). A previous version of the law banned such “propaganda” among minors.

“I am not in Russia now, and I don’t have any right to speak of cultural life there now,” she tells The Art Newspaper from Lithuania, where she and Khodyreva have been since the end of November last year. “I am a person who has been persecuted by the state for three years, after which I left the country.”

Tsvetkova was also branded a foreign agent by Russia’s justice ministry last June, which further restricted her rights and placed her under constant risk of further prosecution, making it “easier to die than to live”, says her mother. “It is very dangerous for Yulia to stay in Russia, despite winning the case… So we were forced to leave.”

TikTok was fined 3m rubles (£47,500) by a Moscow court last October for failing to pull LGBTQ content, books have been pulled from sale, films can be blocked from distribution and museum content is now at risk of stricter ideological censorship by the Ministry of Culture, which is led by Olga Lyubimova, a loyal Putin ally.

The law further extends the reach of Russia’s communications regulator, Roskomnadzor, which is now likened to “political police” as the Kremlin continues to widen its domestic crackdown and culture war on Western values following Russia’s invasion of Ukraine last February.

In passing the law, Vyacheslav Volodin, the chairman of the State Duma, Russia’s lower house of parliament, wrote on his Telegram channel: “The decision will allow us to protect our children, the future of the country from the darkness spread by the USA and European states. We have our own traditions and values.”

For several days in November, before the law took effect, Russia’s first queer museum operated out of the apartment of Pyotr Voskresensky, a gay doctor in St Petersburg, Vladimir Putin’s hometown, known also as “the LGBTQ capital of Russia” and the home of figures who have come to symbolise pre-revolutionary Russian gay culture including Tchaikovsky and the poet Mikhail Kuzmin.

Voskresensky displayed items that he has collected relating to the gay subculture of the 19th and 20th centuries with the aim of overturning the government narrative that Russia is preserving “traditional values” from corrupt Western influence. He was inspired by the “queer interior of the Art Nouveau” era of Modest Tchaikovsky, the composer’s gay brother, at the Tchaikovsky museum-estate near Moscow.

Voskresensky has been giving tours of LGBTQ Petersburg since 2014, after the first anti-gay law was passed. Crucially, several years ago he created a queer tour of the State Hermitage Museum, comparable to such tours at the British Museum and Prado. Under the new law the tour is now impossible so he has posted a queer catalogue of the Hermitage online.

While it is unlikely that queer-themed art can be removed from display at the Hermitage since “most of them are world masterpieces”, Voskresensky says that, after the first law was passed in 2013, the Sleeping Hermaphroditus sculpture (Roman, after Greek original, third-second century BC; unknown artist) at the Hermitage was turned to the wall so its genitalia would not be visible. The Hermitage director Mikhail Piotrovsky has in the past singled out the sculpture as one of his favourite works in the museum. In Soviet times, even though homosexual contacts were criminalised, Voskresensky says improvised gay weddings were held in front of the sculpture.

The shadow of Stalin

Gradually the situation deteriorated, says Voskresensky. “Polls show that Russian youth are much more liberal than the older generation. However, the outbreak of war destroyed these hopes,” he said. “Now our future is much more dangerous and unpredictable. I’m afraid of a repeat of the Stalinist genocide.”

The freedom that the LGBTQ community thought it enjoyed in St Petersburg is completely unheard of in Komsomolsk-on-Amur, where Tsvetkova lived and was persecuted. “The Far East is such a testing ground,” says Khodyreva. “Yulia stood out in the region, she had an independent opinion about everything.”

Khodyreva says a new case was clearly being readied against Tsvetkova since on their day of departure the police found ten witnesses for the prosecution, and also checked past social media posts for anti-war statements.

Both she and Tsvetkova praised the lawyer who won the case, Aleksandr Pikhovkin. In a Facebook post, he noted the cultural importance of the case. “Congratulations to all the artists, museum workers, art historians who helped us… by overturning Yulia’s acquittal, we would have stepped into the Dark Ages.”

U.S. Returns Seven Millennia-Old Seals Stolen From the Baghdad Museum in 2003 to Iraq, After One Appeared in an Online Auction