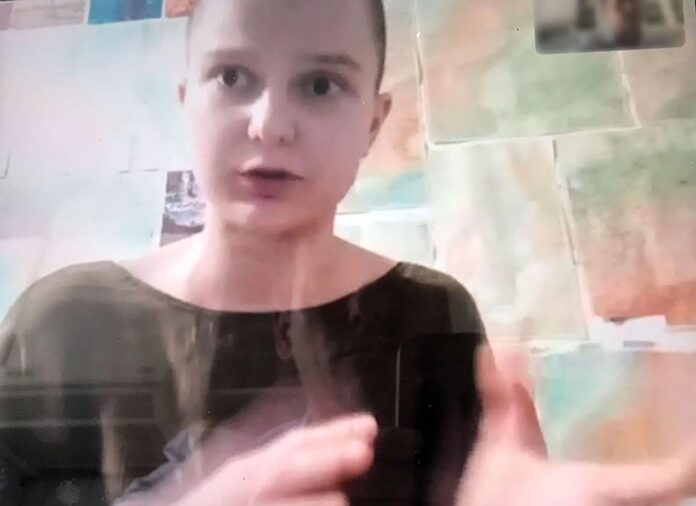 Yulia Tsvetkova, an artist and activist in the Russian far east who is on trial on charges of disseminating pornography for her body-positive feminist drawings was named to the Russian justice ministry’s latest list of “foreign agents” on 3 June.

Anna Khodyreva, the mother of the 29-year-old artist from Komsomolsk-on–Amur, a military-industrial city, who is her unrelenting advocate, posted on her Facebook page about the designation.

“I am the mother of a foreign agent, and am very proud of this,” she wrote, using the Russian shorthand inoagent, which has entered the vernacular.

Over the weekend Khodyreva posted Tsvetkova’s response to her foreign agent status. She wrote that she was “somewhat amused” at being listed in the mass media category of foreign agents, “especially due to the fact that for several years I have not written any texts, political or personal, no posts on social networks, and even no photos of cats”, she wrote, “and not because I am afraid, as many people think, but because I decided so”. Khodyreva also posted a 2018 video excerpt from a play called Evolution that Tsvetkova staged with the youth theatre group Merak that she ran and where her troubles with the authorities began.

Being added to the list, a distinction that president Vladimir Putin’s regime first launched against organisations and extended to individuals, results in numerous legal and financial restrictions. The updated list is typically posted on Fridays (the ministry’s website is no longer accessible from the US) and is announced by Russian state news agencies. Among the others added this week along with Tsvetkova were businessman Yevgeny Chichvarkin, who fled Russia in 2009, and journalists Alexey Pivovarov and Oleg Kashin.

St. Petersburg feminist activist Daria Apakhonchich was the first artist to be labelled a foreign agent, in late 2020. The law was originally passed in 2012. According to the updated version, individuals who “participate in political activity” with foreign funds are now seen as a security threat to Russia, are subject to strict audits and must preface all their publications including social media posts with a “foreign agent” disclaimer. Apakhonchich, who had defended Tsvetkova in 2020 with a performance called Vulva Ballet outside the Mariinsky Theatre in St. Petersburg, left Russia after the 24 February invasion of Ukraine.

The criminal proceedings against Tsvetkova, who faces up to six years in prison, are closed to the press and public. Russian contemporary artists and an anonymous collector rallied to raise funds for her legal defense earlier this year. In 2020, 15 of her works including some of those for which she had come under fire were acquired by the Stedelijk Museum in Amsterdam. Tsvetkova was first targeted by the authorities in 2019 for allegedly promoting an LGBT agenda with a play about gender stereotypes that she staged with her theatre group. She ended up spending months under house arrest and Amnesty International deemed her a prisoner of conscience.

From the Latest Museum Unionization to an Orlando Museum’s FBI Raid: The Best and Worst of the Art World This Week

On view will be “previously unseen imagery, artwork and ephemera” and “rumored relics of the band's real and imagined history.”