Home News Sculptor Virginia Overton Discusses Her Star Turn in 2022, with Projects for... 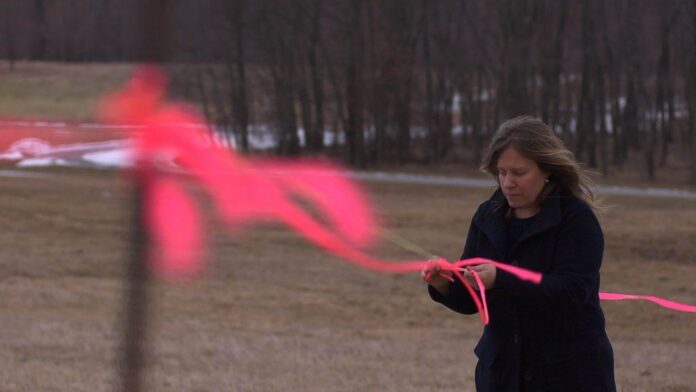 The hits keep coming for the sculptor Virginia Overton. “I made cornbread with polenta,” she said, on the phone from Milan on Thanksgiving. “I have to say, it’s kinda good. I mean, I’m not bragging. I’m just saying.”

Besides her cornbread, this year Overton had two stellar pieces in the Venice Biennale. Her solo exhibition, “Animal Magnetism,” wrapped in July at London’s Goldsmiths CCA. Her solo show “Saved” is on view through the end of the year at the Frist Art Museum in her native Nashville, Tenn., and an assemblage of suspended sculptures was installed in the new Delta terminal at LaGuardia. To cap off 2022, she came to Europe to install her suspended “skylight gems” in Celine’s new Paris flagship on Rue Saint-Honoré, which opened earlier this month. 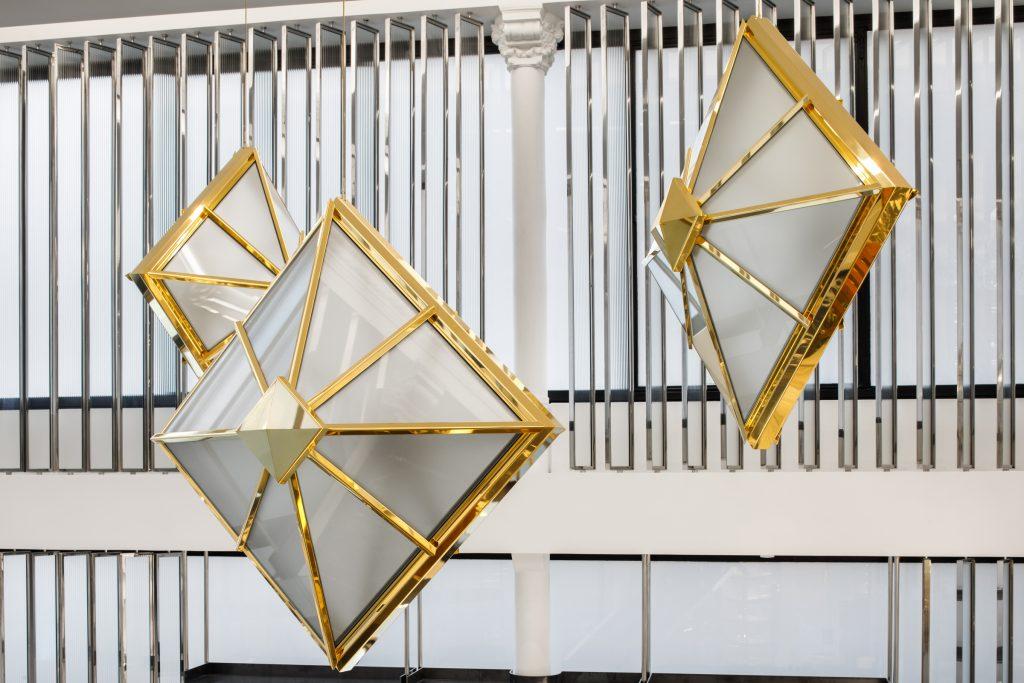 The gleaming sculptures in glass and brass recontextualize a quintessential element of New York City—the skylight—and are Overton’s first commission for Celine (her sculptures are already displayed in three of its boutiques, in New York, Los Angeles, and London).

Celine creative director Hedi Slimane curates the artworks and concepts the commissions as a personal mission. It may seem an odd pairing to match the French fashion house with Overton, whose work often veers toward the Brutalist and industrial. But Overton says their aesthetics vibe.

“It doesn’t seem to make sense, necessarily, but it does,” she explains. “If you think about the materials that Hedi uses in the store, a lot of them are classic sculpture materials like marble and granite. And there are different kinds of metals, and stainless steel and chrome. It’s all the same language.”

Overton is known for her use of found materials, but essentially what she does is locate the beauty and potential in the discarded detritus of modern life. She finds joy in the elemental colors, shapes, and textures of objects orbiting the cityscape. It’s a special kind of optimism and way of looking at the world that is perfect for navigating the never-ending plywood barriers and construction pits of New York. 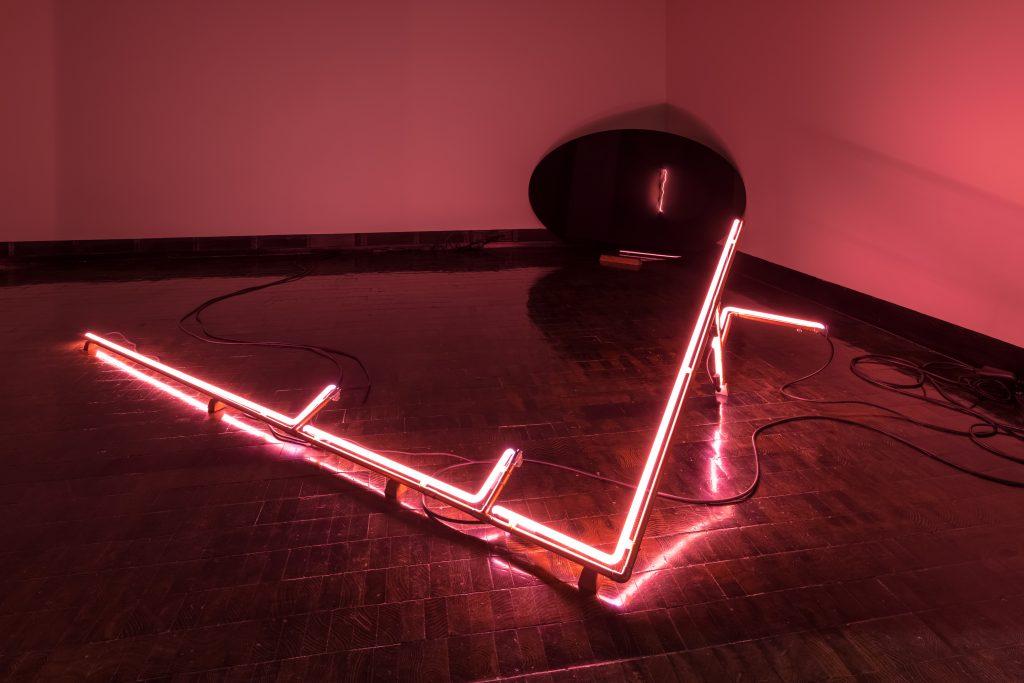 Installation view of Overton’s “Saved” solo exhibition, which is on view at the Frist Art Museum in Nashville until the end of the year. Photo: John Schweikert.

Does this mean she is always dragging shit home? “Yeah, pretty much,” she admitted. “But when I’m in Europe, it’s more like a mental visual inventory. I don’t always have to physically drag it home. I’m not a hoarder.”

She added, “Maybe the material in some cases looks rough. I might take an organic object and make it geometric, and that shifts it from its original form. I don’t see myself as doing this or that, or this thing or the other thing. I can see potential, I don’t know.”

What’s often lost in the conversation about Overton’s work is the message within the medium. Her pieces are often inscrutable, but they encompass more than aesthetics and are roundabout translations of her personal narrative.

Next month, she will be in group shows at Bortolami Gallery and White Cube West Palm Beach, followed by a February exhibition at at Office Baroque in Antwerp. In spring, she will release the . We caught up with her to chat about her Celine commission and her big year. 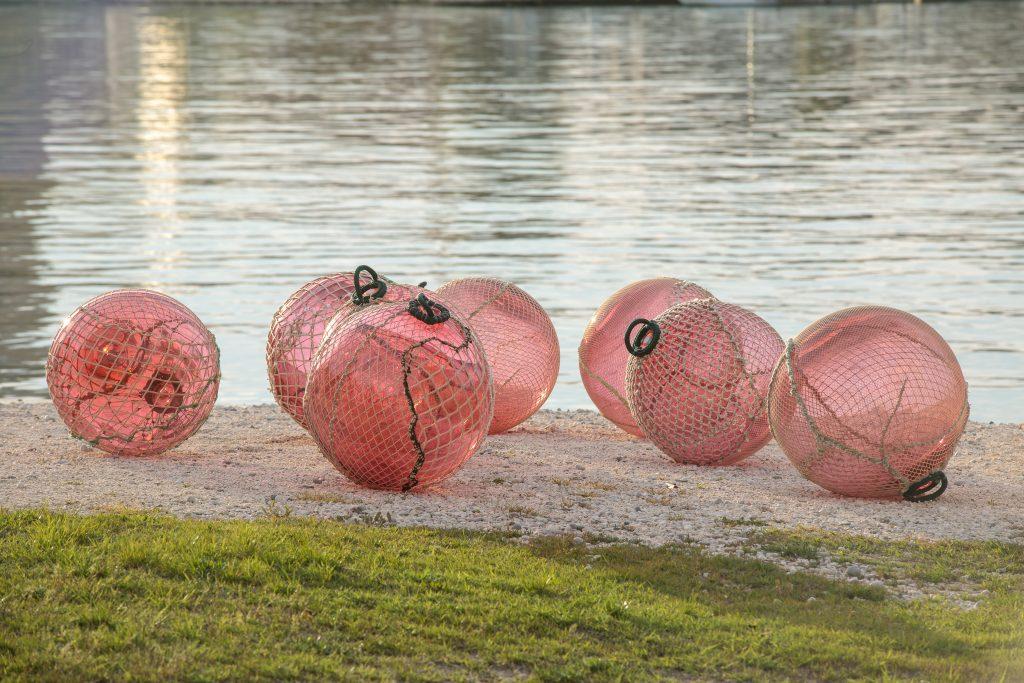 For the Paris store you were commissioned to make these skylight gems that hang from the ceiling.

Suspending things adds another layer. I never really think about suspension as a danger. Some people do, ’cause it’s like, antigravity or whatever. But I just think it adds a new perspective. If somethings hanging, you’re gonna see parts of it you wouldn’t if it were sitting on a floor or on a pedestal. Sometimes it’s just nice not to have everything connected to the ground.

How did you start formulating this idea to decontextualize skylights?

A bunch of years ago, after I’d first moved to New York, I went to Ellis Island and went to the Statue of Liberty. They have a museum at the base of statue. The massive old torch that she came with was basically leaded stained glass. They made her a new, more stable one, but the original is inside the museum. It’s so cool to see it up close. I always really loved that. I did some stained glass when was in high school, but I was really bad at it, because you have to be really precise. 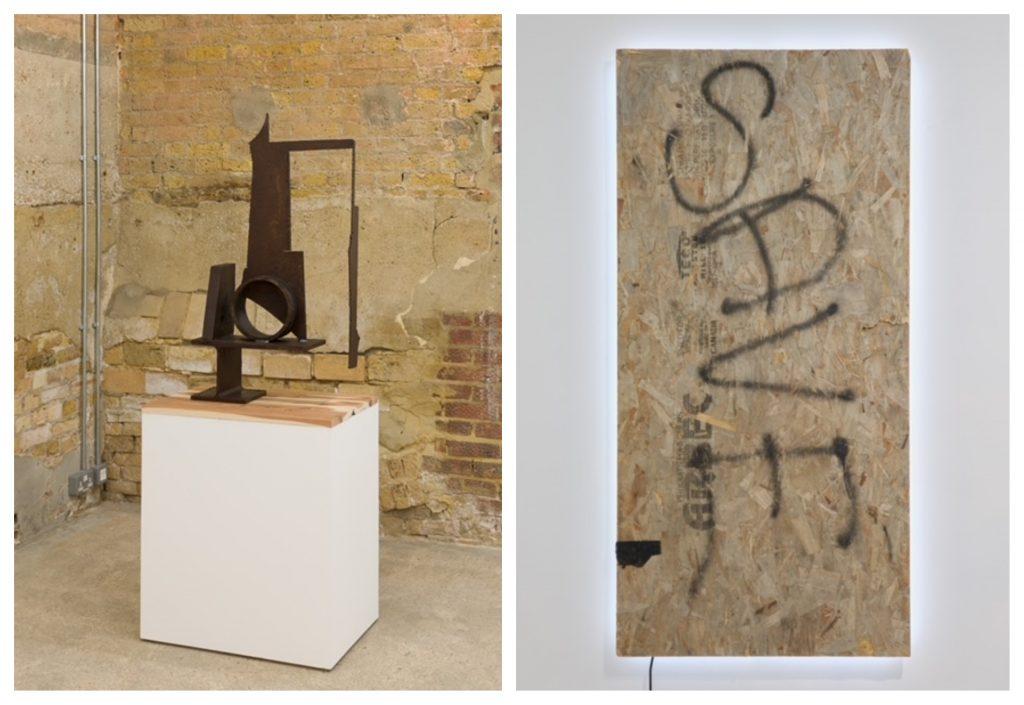 Untitled (stand and swing) from the Goldsmiths CCA show (L) and a piece from “Saved” at Frist in Nashville (R). Photo: (L) Rob Harris, courtesy of Goldsmiths CCA, (R) Courtesy of Overton Studio.

So, then I was thinking about the relationship to skylights in the buildings in New York. When I was a kid, my dad used to come to New York. He bought clothes for the women’s department store in Nashville, Harvey’s. This was before he was married to my mom. He would come to Fashion Week, ’cause that’s when buyers bought everything. He was this country kid coming up here, and and he would talk about flying into LaGuardia, seeing the tops of the buildings. And he talked about the skylights like they were these portals. As a kid I always thought that was really cool, because we didn’t have that where I grew up.

So I was thinking about this project for LaGuardia, and they had wanted me to make a sculpture. And so I made this sculpture, which was basically salvaged skylights that were copied to create another matching half and made into these sort of gem shapes. 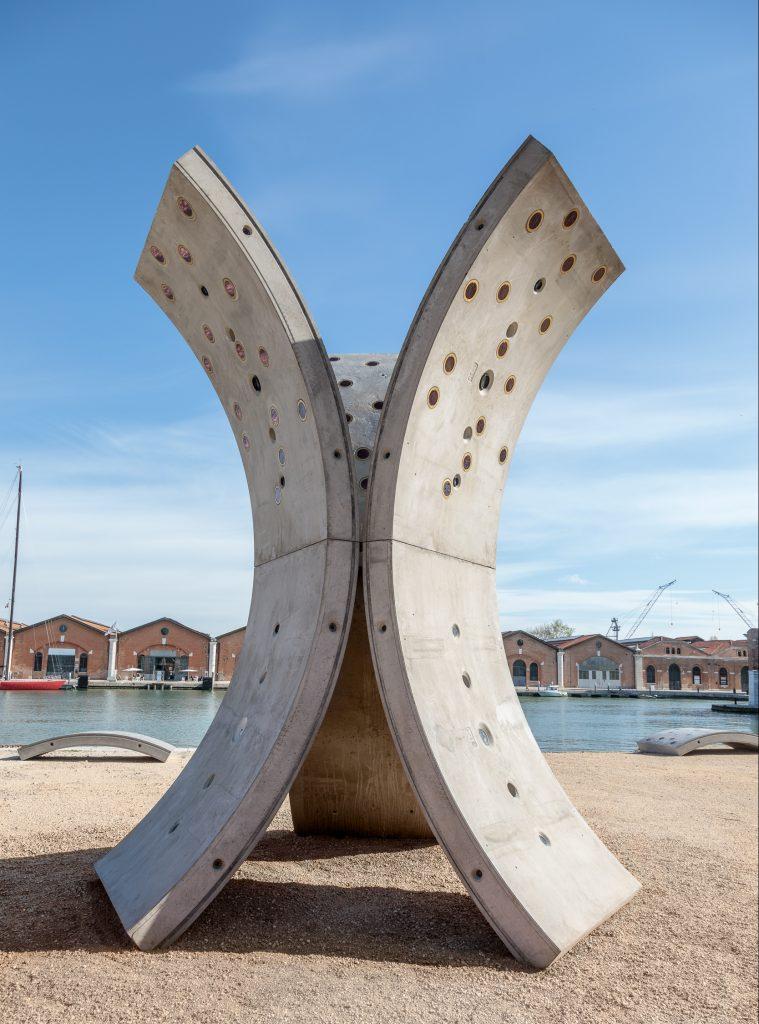 The skylights also related back to this piece that I did in 2015 on that island in the middle of the Seine where they used to make Renault cars, Île Seguin. There was a lot of detritus and stuff from where they used to make the cars, these old factory buildings. And one of the things that was really cool was there was a steel truss roof that had just been either taken off of a building and set on the ground, or something—I don’t know, I couldn’t figure it out. I rented a bunch of theatrical lights and put them in the base of that steel rooftop that didn’t have anything in it anymore, and just lit the object itself.

You couldn’t get [to the structure] because it was a demolition site. There was chainlink fence around it, but you could see it from off the island. These structures are similar…point being, these threads are all pulled through from a lot of different places. I could go back to Celine with this idea that was rooted, in a funny way, the torch of the Statue of Liberty, which came from France right? And then also this old factory roof on Île Seguin that I lit as a structure. The thing about the skylight is that it’s like this little microcosm of architecture. It incorporates everything. So that’s where it comes from. 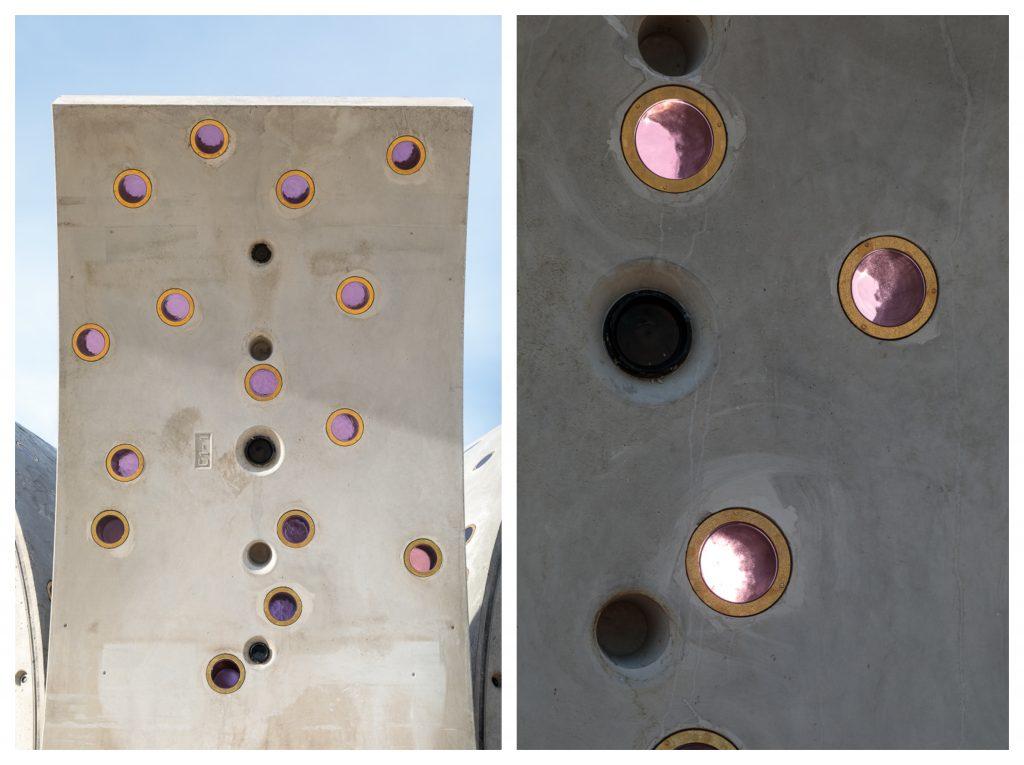 Details of (2022), which will soon go on view in Tuscany. Courtesy of Overton Studio.

That is a winding tale.

I’m probably being a little goofy, it’s just the holiday spirit. I’ve been in Europe for a month. I’m coming home next week. I didn’t know I was going to stay this long. I had gone to do these site visits in Tuscany for projects next year, and I was like, ‘It’s so stupid to go back to the States for a week, Virginia.’ So I went to Rome to see a friend. Then I went to Switzerland to finish these sculptures for Celine, then Paris for the install. And then I came to Milan, next I’m gonna go to Venice one more time to see the Bienniale again.

What is this Tuscany project?

There is this nonprofit group in Tuscany called Hypermaremma. These three friends started it to show large-scale sculpture in the countryside. They’re going to show the Venice piece [] in Tuscany on the seaside, which is gonna be really cool. I went to look at sites for that. And one of the dudes works at this concrete casting company, so I may go to one of those other sites and do a whole other sculpture with a bunch of concrete from the factory! 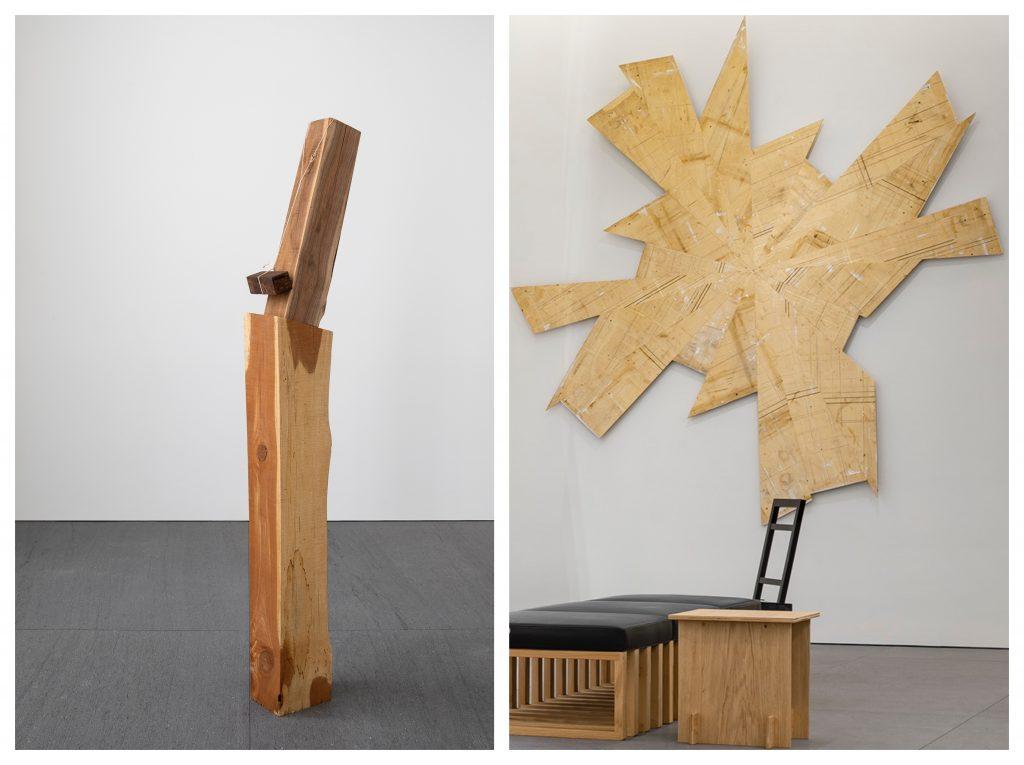 Virginia Overton’s 2017 untitled sculpture stands at attention in Celine’s Los Angeles boutique. Her 2018 untitled plywood “star” is affixed to the wall of the SoHo store. Courtesy of Celine.

I wanted to just touch upon two of the Celine works. The piece in L.A. is rather austere and upright.

That’s cedar and walnut, with a solid steel cube as the counterweight. Those pieces of wood are from the farm in Tennessee. They’d been floating around my studio for who knows how long. That thing’s held together with just gravity. There’s no glue or hardware or anything.

If you have a caption for an artwork, it has like, the title and the medium and the date. If that thing had sealant, I would put that on there, because that’s important. Just saying “mixed media”—which was really stylish at a point to say—I think it’s just being opaque for no reason. 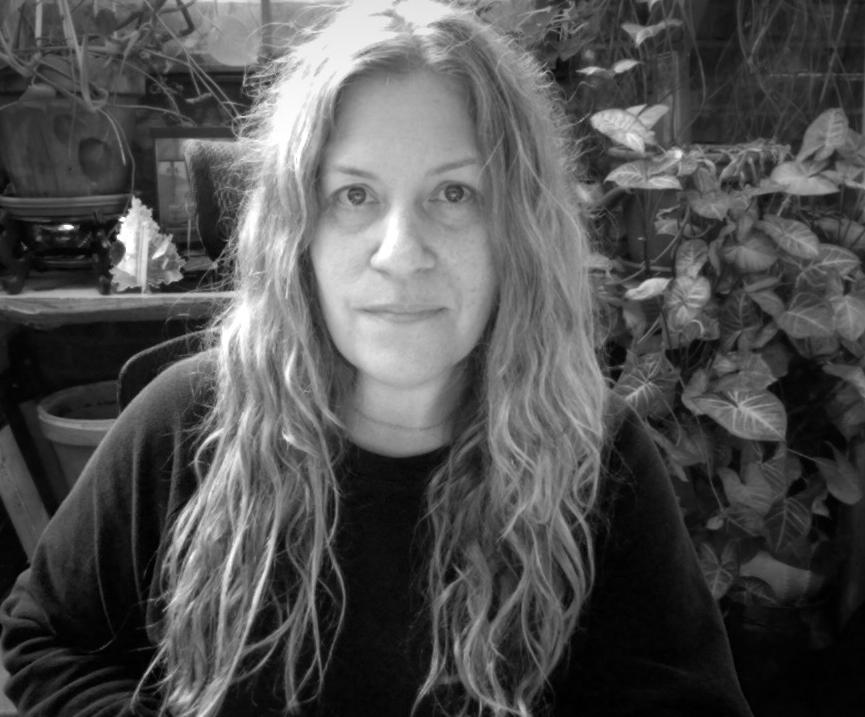 I checked out the plywood wall work at the SoHo store; there is an intricacy to it that doesn’t show up in photos, with lines subtly radiating out.

What they are is work surfaces. The first one I made was literally off of my 4-foot-by-8-foot worktable. You know, you have a worktable and you use it a lot. The first time you accidentally cut into it with the circular saw, you’re like, Goddamn it. But then after you do it 79 times; and you’ve drilled 8,000 holes in it; spilled paint, wood glue, and sealer on it and your Sharpie pen broke open all over it, it starts to look good—not good enough to hang on a wall, but at that point it gets unsafe to work on. So I was replacing it, but when I leaned it up on my wall, I really liked it….but I wanted to go further and make it a little more obliterated. So, I cut it into all these parts and then put the whole thing back together and started calling them “stars.”

Once I got to do an installation of 12 of them together on a wall. Now that I’m saying it, it sounds dorky, but I don’t care—I hung them in the shape of the constellation the Sculptor.

When we were kids, looking at constellations was a way to pass the time. In the summer it was hot as hell in Tennessee and we didn’t have air conditioning. So we’d go outside and we learned all the constellations. So yeah, they are portals. They’re a little bit escapist for me.