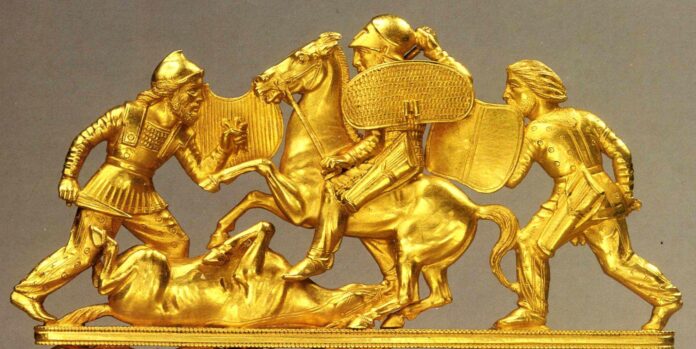 One cultural incident last year, that took place amid the unfolding political and humanitarian tragedy of the Russia-Ukraine war, attracted much international attention: the removal of the Scythian archaeological artefacts from the Local History Museum in Melitopol. On 27 May The Guardian reported that among the Scythian objects looted by Russian occupiers was the golden pectoral, “the star piece in the [museum’s] Scythian gold collection”. Fortunately, the story was inaccurate: the pectoral had not been removed because it was never in the Melitopol museum. It is a part of the collection of the National Museum of Historical Treasures in Kyiv.

But even though the pectoral remained safe, the story of the looting of the Melitopol museum had all the characteristics of a thriller. The museum curators hid their Scythian gold but were betrayed by a collaborator who led the occupiers to the secret location. The Russian media accused the curators of theft and offered a conspiracy theory that the gold from Melitopol was destined for a European Union country.

But the fascination with the fate of the Scythian gold from Ukrainian collections predates the Russian aggression against Ukraine. The Russian Federation made public claims to Scythian archaeological objects in the wake of its annexation of Crimea in 2014. Just before that, Ukraine had sent gold artefacts from the collections of Crimean museums to an exhibition at the Allard Pierson Museum in Amsterdam. The objects became trapped there and the lengthy legal struggle to return them to Ukraine attracted much press coverage. The Dutch court of appeal’s final decision to return all the exhibits to Ukraine provoked a loud outcry in Russia. Russian newspapers accused the Netherlands of looting comparable to the crimes of Napoleon and Hitler. Sergei Shuvainikov, an ex-member of the State Council of Crimea, even demanded in October 2021 that a special military operation be organised to return the artefacts by force.

But what is behind this fixation with Scythian heritage? There are two aspects: first, everything related to Crimea had to be fiercely defended as inalienable Russian property. Secondly, some of Putin’s ideologists had decided that contemporary Russians are no less than the successors of the ancient Scythians, hailing from the East.

Once, Scythian artefacts were a symbol of the easing of strained relations between Russia and the West. The 1975 exhibition From the Lands of the Scythians, organised by the Metropolitan Museum of Art in New York, marked the beginning of museum exchanges with the Soviet Union. The Met sent 100 masterpieces from its collection to the USSR to secure reciprocal loans of the gold artefacts from the Hermitage and Kyiv’s National Museum of Historical Treasures. The show became the most visited exhibition in the history of the Met museum.

But today the Scythian artefacts have became the symbol of a war of identities. Russian attempts to claim succession from the ancient Scythians date back to the 18th century. Catherine the Great, who tried to establish the roots of the Russian people, mused that Scythians could be the forefathers of Slavic tribes. Fantastic ideas about the Scythian origins of Russians proliferated during the 19th century. However, the militant nomads became especially popular at the beginning of the 20th century when Russian intellectuals tried to counterpose themselves to the “decadent” West. During this time, Scythians firmly pitched their tents in Russian political thought and poetry. Poets sang of the warriors of the steppe who created a buffer between the treacherous West and oriental hordes.

Putin’s ideologues have dusted off and reused all this forgotten historical bric-à-brac. One of the visible signs of this grand ideological recycling is a desire “to be Scythian” manifested in attempts to appropriate the actual archaeological objects from Ukrainian museums, and to proclaim Russia the successor of the ancient nomads. A splinter group of Aleksandr Dugin’s right-wing Eurasian movement had chosen the name New Scythians.

Seventeen days before the Russian invasion of Ukraine, Dmitry Rogozin, a Russian politician close to Vladimir Putin, released a video of himself reciting the 1918 poem The Scythians (“Yes, we are Scythians, leaves of the Asian tree”) by the Russian symbolist Aleksandr Blok. Many took it as a disgusting abuse of Russian culture, but it was a warning about the coming war.

• Konstantin Akinsha is an art historian and curator, and founding board member of the UK-based Avant-garde Art Research Project