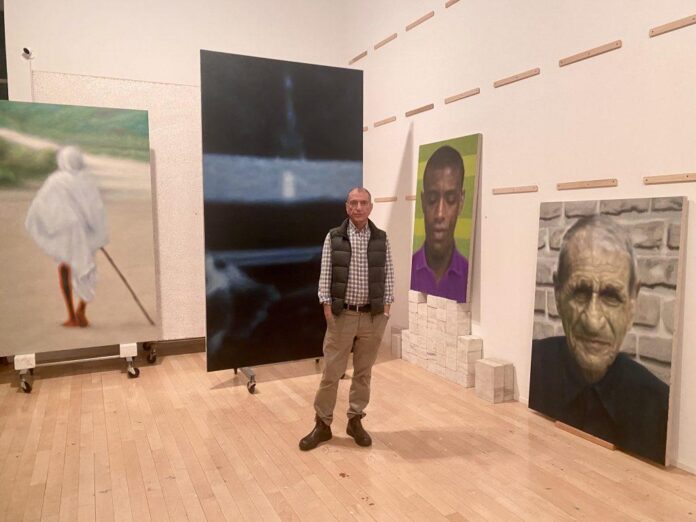 Growing up in Iran, 66-year-old artist Y.Z. Kami began learning his craft at the hands of his mother, a classically trained portraitist and landscape painter. He moved to New York in 1984, where today his large-scale oil-on-linen canvases are dwarfed by the double height ceilings of his home studio in Chelsea.

A large table littered with papers and art books runs nearly the full length of the space—Kami and his partner and studio manager, Daniele Dorili, have been known to host the occasional dinner party on its surface, which can seat 16—and a giant closet near the entrance serves as extra storage for finished works.

When Artnet News visited the space, it was filled with paintings ready to be transported just a few blocks northwest to Gagosian, for the artist’s first New York solo show in nine years. A foam core mockup of the West 24th Street space fabricated by the dealer showed where each work would be hung—the scale model was impressive, Kami said, but not as nice as the wooden one Gagosian’s London staff made him ahead of his last show across the pond.

The new exhibition features a mix of the soft-focus closely cropped portraits Kami has specialized in for years, as well as a newer series of black-and-white abstract works he’s dubbed “Night Paintings.” 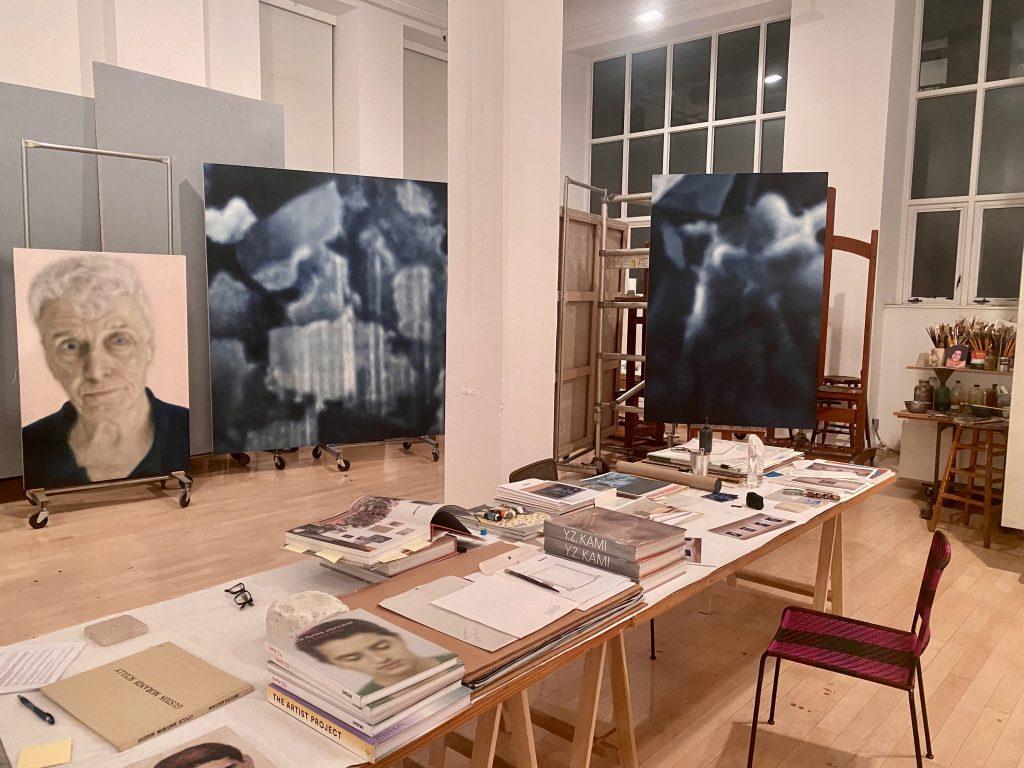 “I’m showing them together, and I’m a little nervous because they are very different,” Kami told Artnet News. “That’s why the show is called ‘Night and Day.’”

It’s a busy time for the artist, who is also wrapping up a solo show at Spain’s Museo de Arte Contemporáneo de Castilla y León and opening another one next month at a trio of venues in Florence. Even with all that going on, Kami was kind enough to give us a tour of his studio, and a glimpse into his artistic practice. 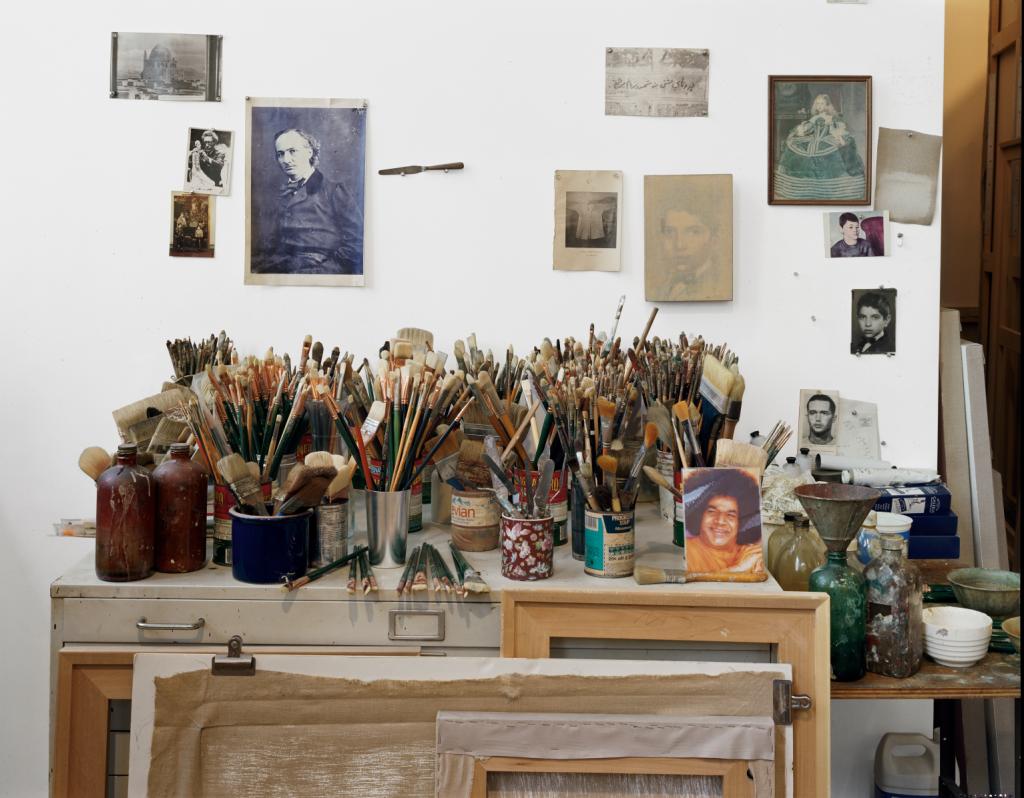 Y.Z. Kami saves all his old brushes in his Chelsea studio. Photo by Louis Heilbronn.

My studio in New York City is in Chelsea, near Flatiron. I moved there from Tribeca in the late 1990s. The whole building was commercial photography studios. On this floor was a fashion photographer, and it was divided into different rooms, for changing and storing clothing. Part of it was two levels. It was a major renovation. Now, it is a large space with a very high ceiling.

I have a second studio, which I love, in Garrison, New York, situated in the Hudson Valley, completely immersed in nature. There is a large barn at the other end of the property that we renovated to become my studio. In the winter, that little walk from the house is sometimes difficult, because it can get very cold up there!

I don’t turn on the lights! I actually just paint with natural light, so in the winter, the painting sessions are shorter. After dark when I need to turn on the lights, I work on other things such as sketches, photographic works, photoshop, etc. 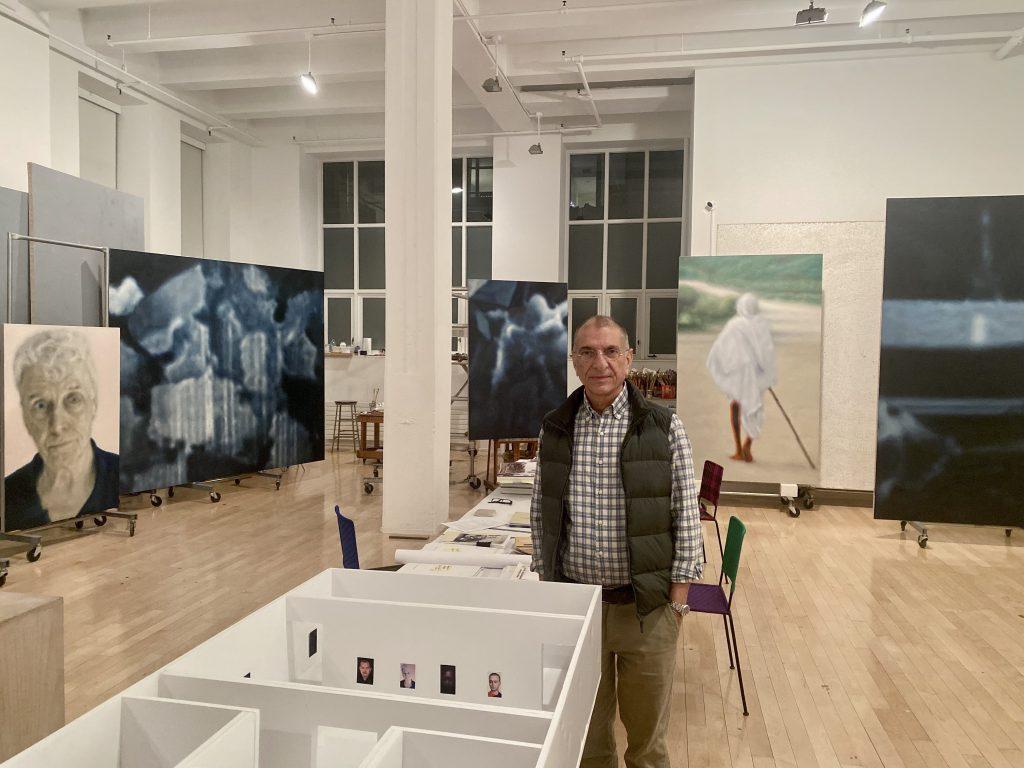 Y.Z. Kami in his Chelsea studio, with a model of his new show at Gagosian in the foreground. Photo by Sarah Cascone.

There are two part-time assistants that help me with the management of the studio, and also stretching and gessoing the canvases, cleaning the brushes and organizing various things in the studio.

I just finished the last paintings for my exhibition at Gagosian in Chelsea, and am continuing to work on a new painting—it is after the death mask of the Italian renaissance architect, Brunelleschi. This is for an exhibition project opening in Florence next month. 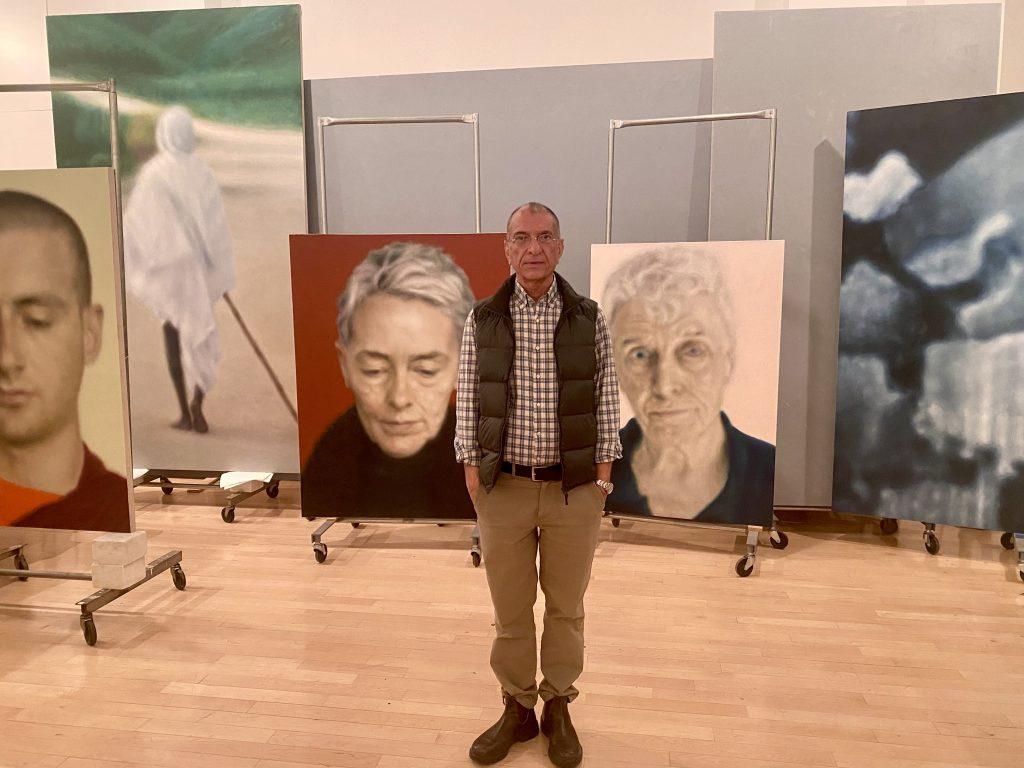 Y.Z. Kami in his Chelsea studio. Photo by Sarah Cascone.

Usually, I am in my studio at around 8 a.m. and leave the studio after 6 p.m. In between, I have the ritual of lunch and a short afternoon nap! Usually our routine is that Daniele cooks lunch and I cook dinner. When I’m in the country, I do take a one hour walk in nature every day. But the majority of time, depending on the daylight, is filled with painting.

I love my brushes! I have a mixture that I make for my oil paint that has a lot of dry pigment in it. It sort of destroys the brush. But I love my brushes, and I never throw them out, even once they are not usable. So I have many, many brushes in my studio! It’s like a graveyard of 30 years of brushes. 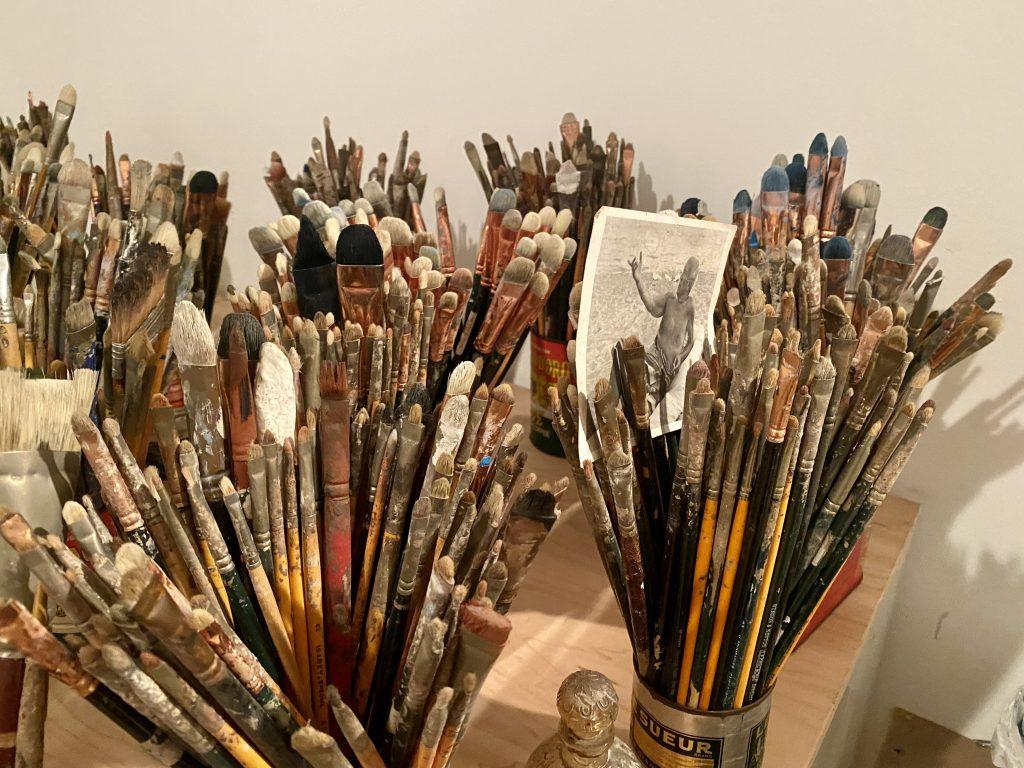 Y.Z. Kami saves all his old brushes in his Chelsea studio. Photo by Sarah Cascone.

Do you have any other artists’ work in your studio?

I have a bronze African mask which I bought some years ago in an antique shop—I don’t think it’s a very old piece, because it was not very expensive. It’s the head of a man with two crocodiles on his head, and it sits on a table in my studio. It is a sculpture which I look at every single day, and I love it.

And I have several books of Fayum portraits, from ancient Egypt.

There is also a photograph of a painting by Diego Velázquez which is on the wall in the studio above my brushes. I framed it a long time ago, and it’s a reproduction of a painting which is in Kunsthistorisches Museum in Vienna. The portrait is of Infanta Margarita, a marvelous painting. I was a teenager when I saw it there. 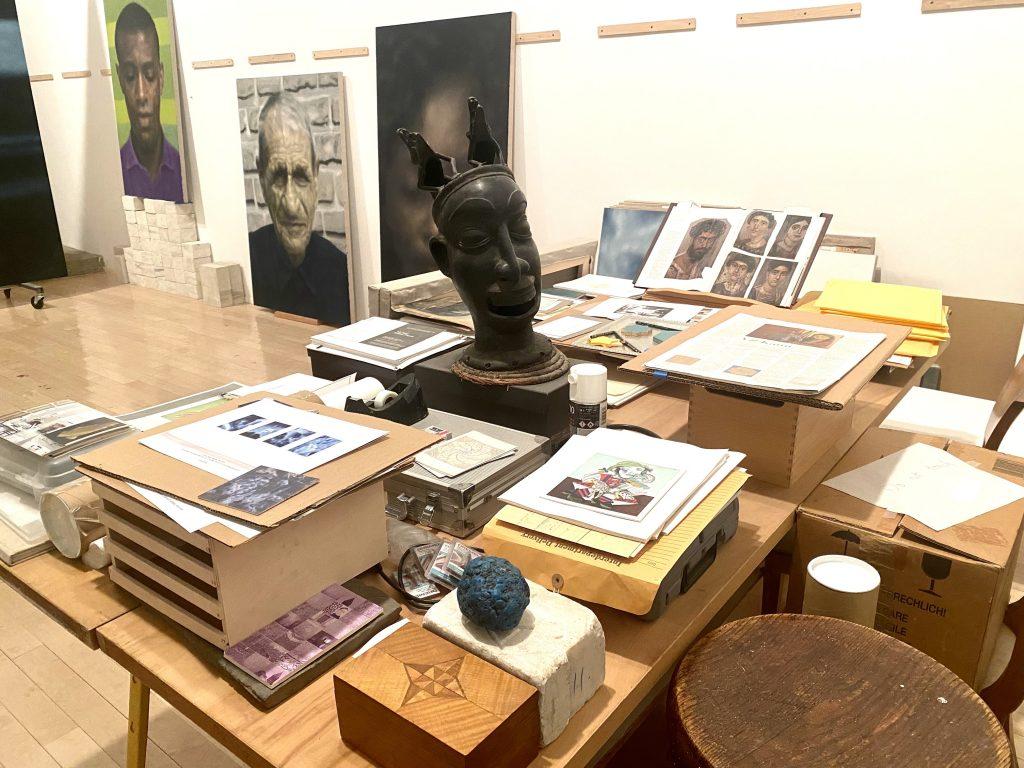 A bronze African sculpture and other objects, including a displayed book of Fayum portraits from ancient Egypt, in the studio of Y.Z. Kami. Photo by Sarah Cascone.

What’s the last museum exhibition or gallery show you saw that really affected you and why?

Last month I saw Wolfgang Tillmans’s large exhibition at the Museum of Modern Art [in New York]. I found it very interesting. It is so fresh and playful, and you follow his gaze from room to room. It’s wonderful!

What’s the funniest thing that ever happened in your studio?

A strange thing, which is still a mystery to me, is that my late cat, who spent years in the studio, didn’t ever touch my canvases with her claws—yet she destroyed the fabrics on the sofas and other furniture!

The British Museum Declined to Show Ultra-Precise Digital Replicas of the Parthenon Marbles. So Another Institution Stepped in

Hundreds of Ancient Dice Made From Animal Bones Were Used to Summon Gods and Predict the Future, a New Study Reveals