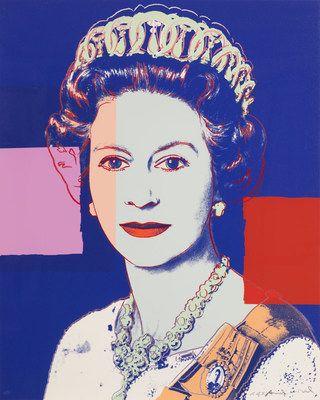 At yesterday’s autumn evening sale at Heffel auction house in Toronto, both live and on-line action generated strong results, with Andy Warhol’s portrait of Queen Elizabeth II stealing the show. It made $853,000 (all prices are in US dollars), breaking the global auction record for an editioned print by the artist along the way. Meanwhile, the painter and Group of Seven front man Lawren Harris racked up significant figures: six works of his realised $5.5m (all sale prices include fees), as Heffel took in a total of $15.6m for the evening.

Warhol’s royal blue screenprint of the late queen is one of four depicting Elizabeth II that were included in his 1985 Reigning Queens series. This particular lot was from the ultra-rare Royal Edition, embellished with diamond dust, and carried a low estimate of $373,000.

It opened at $400,000, stalled briefly before bidders stepped it up and after some fierce sparring, hammered to a telephone bidder for $710,000. The auctioneer, Robert Heffel, noted that the sale represented a return to pre-pandemic measures, beginning the evening by saying, “It’s exciting to have people back in the ballroom.”

The four prints of Elizabeth II were exhibited at Windsor Castle in 2012, for the exhibition The Queen: Portraits of a Monarch. The Warhols were the only portraits shown that the monarch did not commission or pose for. Also in the Reigning Queen series were Queen Beatrix of the Netherlands, Queen Margrethe II of Denmark and Queen Ntfombi Tfwala of Swaziland (now Eswatini), who were then the world’s only four reigning queens. Each was also the subject of four prints, making for a portfolio of 16. Depicting royalty was something of a departure for Warhol, perhaps best known for his portraits of film and pop stars.

Another surprise in Toronto was provided by female Automatist painter Marcelle Ferron, whose Sans titre, which was estimated between $149,000 to $224,000, sold for some five times the high estimate, taking in $1.3m. “Canada’s contribution to the global art market yet again proves strong, confident and passionate,” Heffel said after the sale.