Home News Simon de Pury on What Weathering Past Recessions Has Taught Him About... 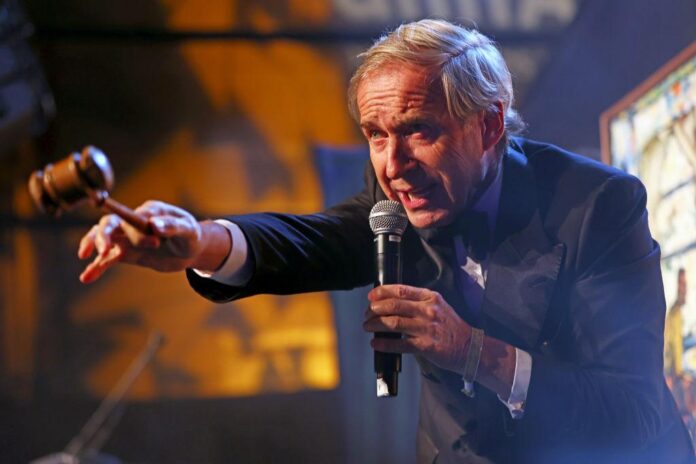 A very pertinent analysis has been made by the brilliant writers of Artnet News of the massive overall sales totals achieved by Christie’s, Sotheby’s and Phillips during the most recent November auctions. A staggering $3.2 billion was obtained for Impressionist, Modern, postwar and contemporary art being hammered down over a period of just ten days. It includes the $1.6 billion record of the Paul Allen Collection at Christie’s, which pulverized the previous record of $922.2 million for a single owner collection obtained at Sothebys for the Macklowe Collection in November 2021 and May 2022.

The timing of the sale of the Paul Allen Collection could not have been better for the art market overall. It proved that, no matter what the general economic climate is at any given moment, the appearance of an exceptional quality and fresh-to-market single owner collection will always cause heated competition. Collectors know that if they don’t go for that caliber of works when they turn up, these may be gone foreve—or for at least one or two generations.

As an infinitely more modest collector than most consignors to the recent sale—accumulator is a more appropriate word—I have regretted for years works that have escaped me simply because I wasn’t bold enough to step up and pay that extra bit needed. I have bought good stuff and bad stuff over the years but never regretted having bought something I coveted, even if coming up with the money to pay for it has at times given me nightmares. 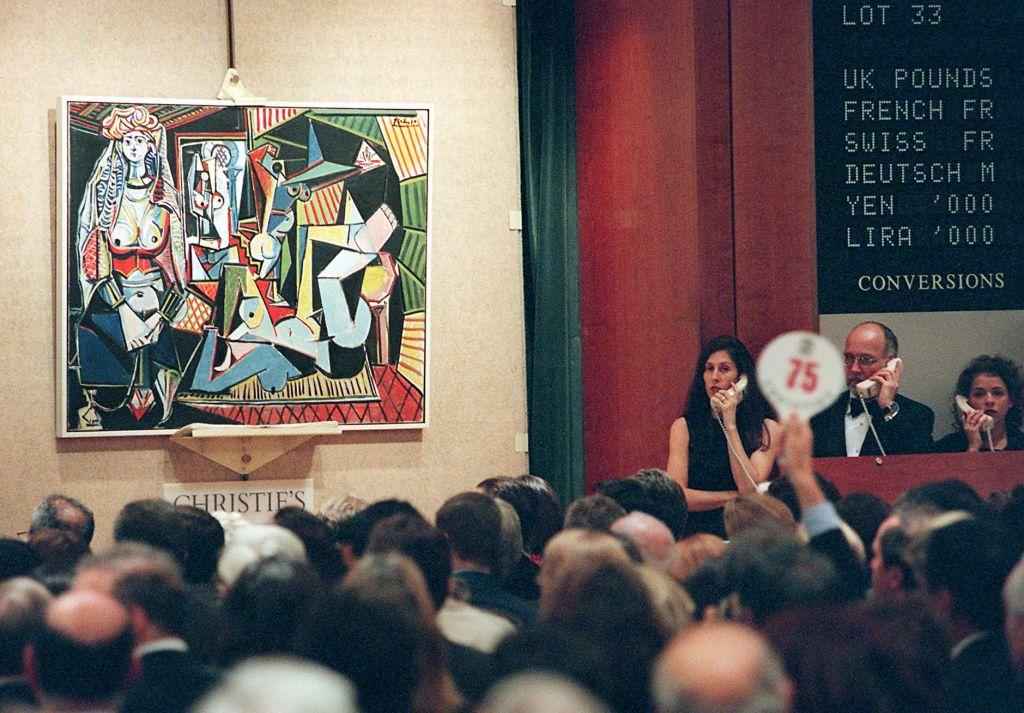 A bid comes in for Pablo Picasso’s painting, Les femmes d’Alger 10 November in New York at Christie’s auction house. The painting sold for 31.9 million USD and was one of 58 pieces of 20th century art offered for sale from the collection of Victor and Sally Ganz. Photo by Stan Honda/AFP via Getty Images.

I discovered this early in my professional life when I was curator of Baron Thyssen-Bornemisza’s Collection in Lugano, Switzerland. My office was located exactly one floor above the one of his chief accountant. Every morning when I would arrive at work he would plead with me “Please, please prevent the Baron from acquiring any more works! I simply don’t know how to pay the bills!”

This impressed me very much, and selfishly I also realized that the ultimate consequence of cash-flow drying up completely would be that I would be out of the absolute dream job back then in the art world. I therefore prepared a small list of works from the collection that could be sold at auction. When there were five or six works by any given artist in the collection I would select the least good one. A lot of collectors use this method to prune their art holdings and to create the liquidity to upgrade their overall level of quality. The chief accountant was thrilled with my proposal and the Baron was a good sport about it. This despite the fact that, as most passionate collectors, he loved acquiring new works and hated selling anything. The results of the auction at Sotheby’s eased for a while the daily pressure that the accountant was putting on me. Looking at it in hindsight, giving in to that pressure and putting that list together, was totally idiotic. While evidently there were no A+ works on my list, even the value of B- or C+ works for these artists grew so much in value over the years that none of them should have been sold.

The sales of the Paul Allen Collection at Christie’s and to a lesser degree of the David Solinger Collection at Sotheby’s in a way played the same role for the art market now that the spectacular sale of the Pierre Bergé & Yves Saint Laurent Collection did when it was sold at Christie’s in Paris in March 2009. Then, like now, the sizzling results were a formidable confidence booster for the thesis of art being an excellent alternative investment class. The big difference is that the round of sales preceding the Saint Laurent auctions i.e. the London October and New York November sales at the three main houses in 2008, had been a bloodbath. The percentage both in value and in numbers of the unsold lots was in excess of 50 percent. A number of the key lots had been guaranteed when they were consigned in a good market in the spring of 2008. The consequence was losses for all three houses. The art market had not seen anything like that since June 1990 when similarly high percentages of works failed to sell after Japanese buyers, who had fueled the 1980s boom, ceased acquiring artworks from one moment to another. 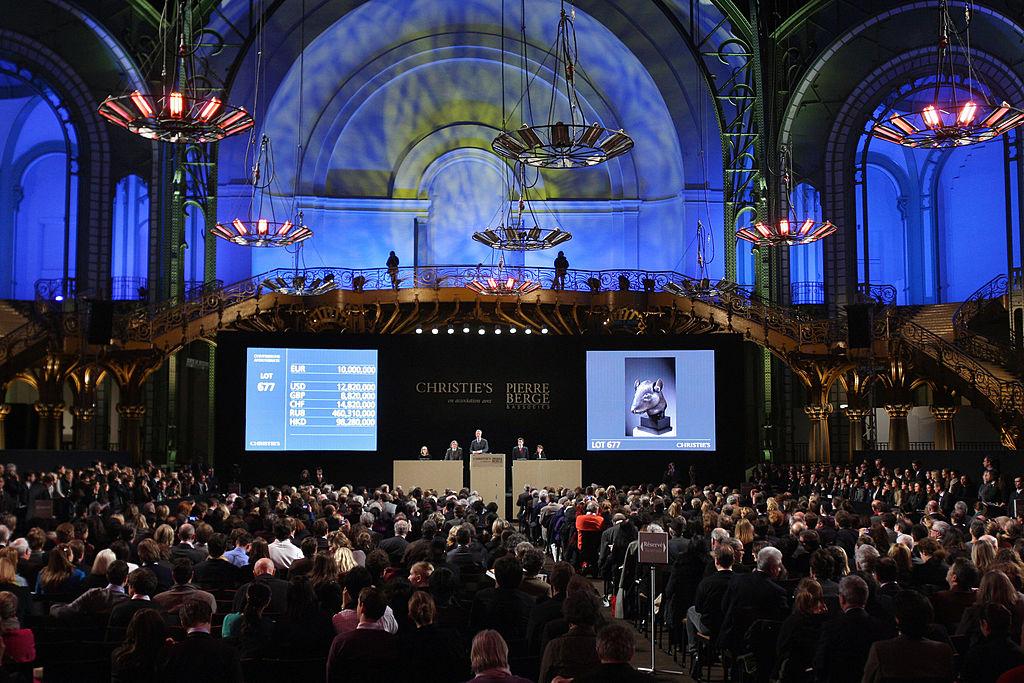 An auctioneer proceeds with the auction of a rat head, a Chinese imperial bronze part of a prized art collection assembled by Yves Saint Laurent and his partner Pierre Berge over half a century on February 25, 2009 at the Grand Palais in Paris. Photo by Patrick Kovarik/AFP via Getty Images.

The success of the Saint Laurent auction in 2009 at Christie’s meant that the art market recession had been short and in a sharp V shape.In 1990 and the subsequent years,no single-owner collection of a comparable caliber to the Paul Allen or the Yves Saint Laurent Collections came onto the market. It was only in 1997 and in 1998 when the Victor Ganz Collection and the Jacques Koerfer Collection were sold, both at Christie’s in New York, that the art market had fully recovered.

There are not that many art market professionals left who were around in the early 1990s when the market was tough. Stories of star salesmen of top London galleries needing to sell their Porsche motor cars or of dealers who had overextended themselves sitting on a lot of stock unable to repay their debts were circulating. Conducting auctions required strong nerves. None of the key lots were guaranteed or had irrevocable bids. I remember standing on the Sotheby’s rostrum, gavel in hand, wondering why the sale room was packed when nobody was raising their paddles, luckily with the notable exceptions of the Nahmad or Mugrabi families who were bidding smartly.

With the current energy crisis, wars, inflation, pandemic, supply chain disruptions, crypto meltdown, extreme polarization, and the climate catastrophe these are challenging times at best for the inveterate optimist that I am. Seen only from the microscopic perspective of the all in all tiny art market, there are facts that would nevertheless inspire confidence. According to Forbes, the 10 richest individuals in the world have doubled their fortunes since before the pandemic, and the number of billionaires has risen during that time from 2153 to 2668. At the same time the number of trophy quality artworks left in private hands is shrinking each year. This alone should ensure that going forward we will see price levels we never imagined would be possible before. 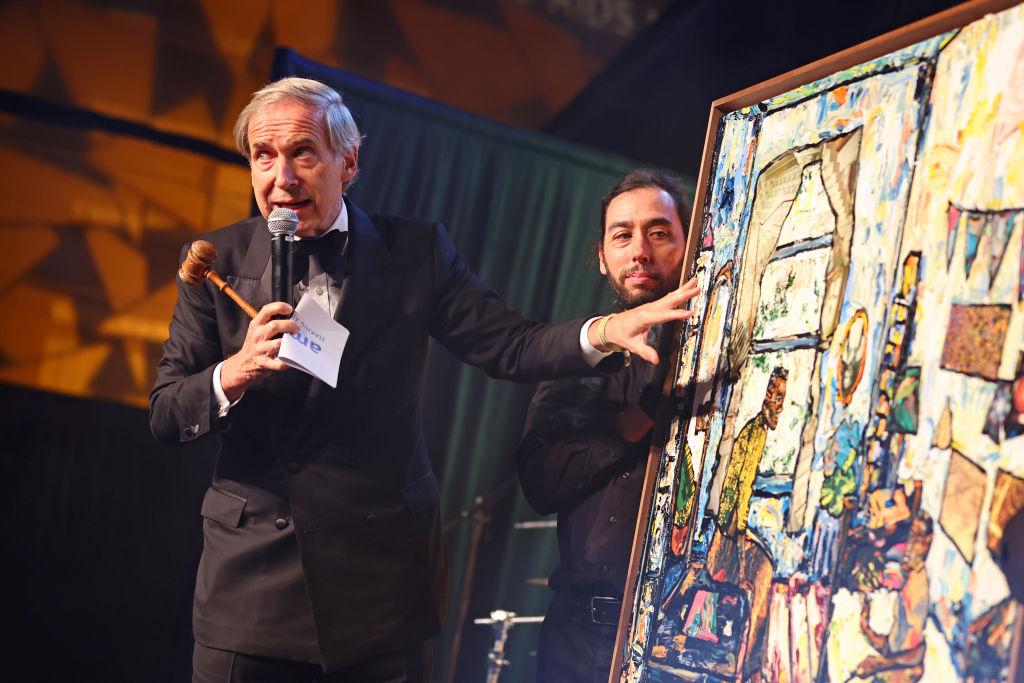 What did however strike me during the slow down of the art market in the early 1990s, was that when the general mood completely switches it can also alter the mood of the super rich. The overall impact of Asian buying on the market should also not be underestimated. Katya Kazakina mentioned in her article on November 16 that 50 percent in value of Sotheby’s “The Now” auction was purchased by Asian collectors. Should Chinese bidding halt in a comparable way to the stop of Japanese purchasing in the ‘90s, it surely would also have a detrimental impact.

During the summer of 2008 I was conducting my habitual round of charity auctions including some in the Hamptons. These galas are always attended by not only very affluent but also very generous guests. They were all there but they were not bidding, and getting bids felt like extracting teeth. This gave me the feeling that clearly stormy weather lay ahead and so it is that during that same summer I negotiated with three potential purchasers the sale of a majority of Phillips. A contract was signed with the current owners of the company on October 4th and so when it appeared on October 8th that the global financial world was in meltdown I was able to weather the storm.

This summer and fall I have been busy as ever swinging my gavel at numerous benefit auctions around the globe. They all have been characterized by spirited bidding. So despite the generally pitch black horizon I  remain optimistic for the art market.