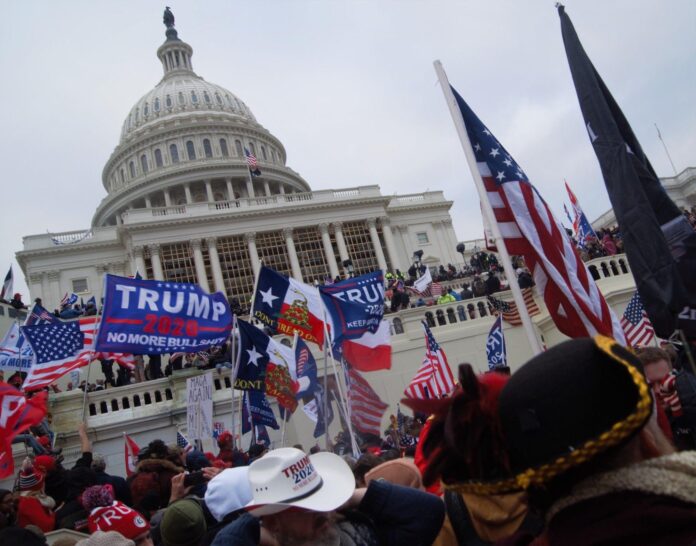 Respected and collected during his life but perhaps less prominent in the years since his death, painter Gregory Gillespie (1936-2000) is something of a footnote in the history of post-war American painting. His 60-year-old son, Vincent Gillespie, who has a degree in engineering but appears to have lived largely off an inheritance, may end up being a footnote to the artist’s life.

In February 2022, Vincent Gillespie, who lives in Athol, Massachusetts, was arrested by federal agents and local police officers for being among the people who assaulted law enforcement officers during the 6 January 2021 insurrection at the US Capitol in Washington, DC. He was identified by photographs in which he holds a shield and grabs a Capitol police officer by the arm, trying to pull him into the crowd, all the while screaming “traitor” and “treason” at them. According to the Federal Bureau of Investigations (FBI), six witnesses, including a former neighbour, an employee of a local business and multiple Athol town employees, identified Gillespie in photographs that the bureau released to the public in 2021 seeking suspects.

Gillespie was charged with nine federal crimes, the most serious of which are assaulting, resisting or impeding police. He is scheduled to be tried in federal court, potentially as soon as later this week. If convicted, he faces a penalty of up to eight years in prison.

Neither Gillespie nor his legal counsel were available for comment. Gillespie is not unfamiliar with the legal system, having spent several years contesting a $15 parking ticket in Northampton, Massachusetts from 1997. The ticket was for parking outside designated parking spots, and Gillespie complained that the ordinance was used “to rack up funds and extort money from unsuspecting drivers” when he contested the fine. He lost, then appealed to the state’s Superior Court, where the $15 fine was rescinded but not the $250 Gillespie paid to file his appeal. He then brought his claim to the Supreme Judicial Court, which ruled against him, eventually bringing his case to the state legislature, where a bill to correct what he saw as an injustice was voted down.

Gregory Gillespie was a realist painter in the mode of a group of other American artists of his era, including William Beckman, Alfred Leslie, Alice Neel and Philip Pearlstein, who specialised in honest—not flattering, heroic or grotesque—portraits and sometimes self-portraits. Gillespie was particularly influenced by European Old Masters, such as Carpaccio, Mantegna, Dürer and Carlo Crivelli during the nine years that he lived off and on in Europe beginning in 1962, where he travelled after receiving his MFA from the San Francisco Art Institute, until 1971. He said that he wanted to look at things “without having art in the way”.

Because he sometimes added fantastical elements to his realist images, such as Catholic altars and collage elements, Gillespie is sometimes categorised as a magical realist. His works are in the permanent collections of major institutions across the country, including the Hirshhorn Museum and Sculpture Garden, Whitney Museum of American Art, Metropolitan Museum of Art and the Boston Museum of Fine Arts.

During his life, which ended by suicide in 2000, the artist was frequently asked by collectors to make their portraits, a prospect that Gillespie sometimes accepted but often found unappealing. “I’m not a portrait painter; I’m not about absolute likenesses,” he said, adding that any portrait commissions contained two stipulations in his agreement. “First, the portrait may not be flattering and it may not even look like you,” he said. “Second, I can take as long as I want.”