Events for every taste: parades, fashion shows, flower shows, car shows, national celebrations of specific cultures (from Chinese New Year to Greek parades), film festivals, assemblies, new movie shoots, and so on. Visiting one or more of these events will diversify your trip and provide a vivid range of emotions. If you are deciding when is the best time to go, check out this section for a list of events for each month in New York: theater and opera, concerts, basketball, hockey, tennis, etc.

In January, it’s the traditional Restaurant Week, or Restaurant Week, the Boat and Yacht Show, and the Winter Jazz Festival. Chinese New Year is widely celebrated in New York, in late January or February (depending on the year and Chinese calendar). There are several parades in the spring, including the Easter parade. In spring, the cherry blossoms at the Brooklyn Botanical Gardens are not to be missed, nor is Fleet Week at the end of May. The highlights of summer are the Metropolitan Opera’s free concerts in the parks, the Museum Mile Festival, Fourth of July fireworks, Summer Restaurant Week, and the US Open tournament. In the fall, New York City hosts Fashion Week, the Halloween parade, and the Thanksgiving Day parade, which ends with Santa Claus entering the city in triumph. December is a pleasant pre-holiday rush, a parade of storefronts in New York City department stores, Christmas, and, of course, welcoming New Year’s Eve in Times Square.

There are also many professional trade shows and conferences in New York City. You can see some of them on the Jacobs Javits Center Fairgrounds website.

The pandemic has brought changes to the way of life, including the schedule of exhibitions and festivals that had been held on established dates for years. Postponing events to 2022 or mastering the online format was a solution for some organizers. But many hope that 2021 will still offer meetings outside of the digital space. 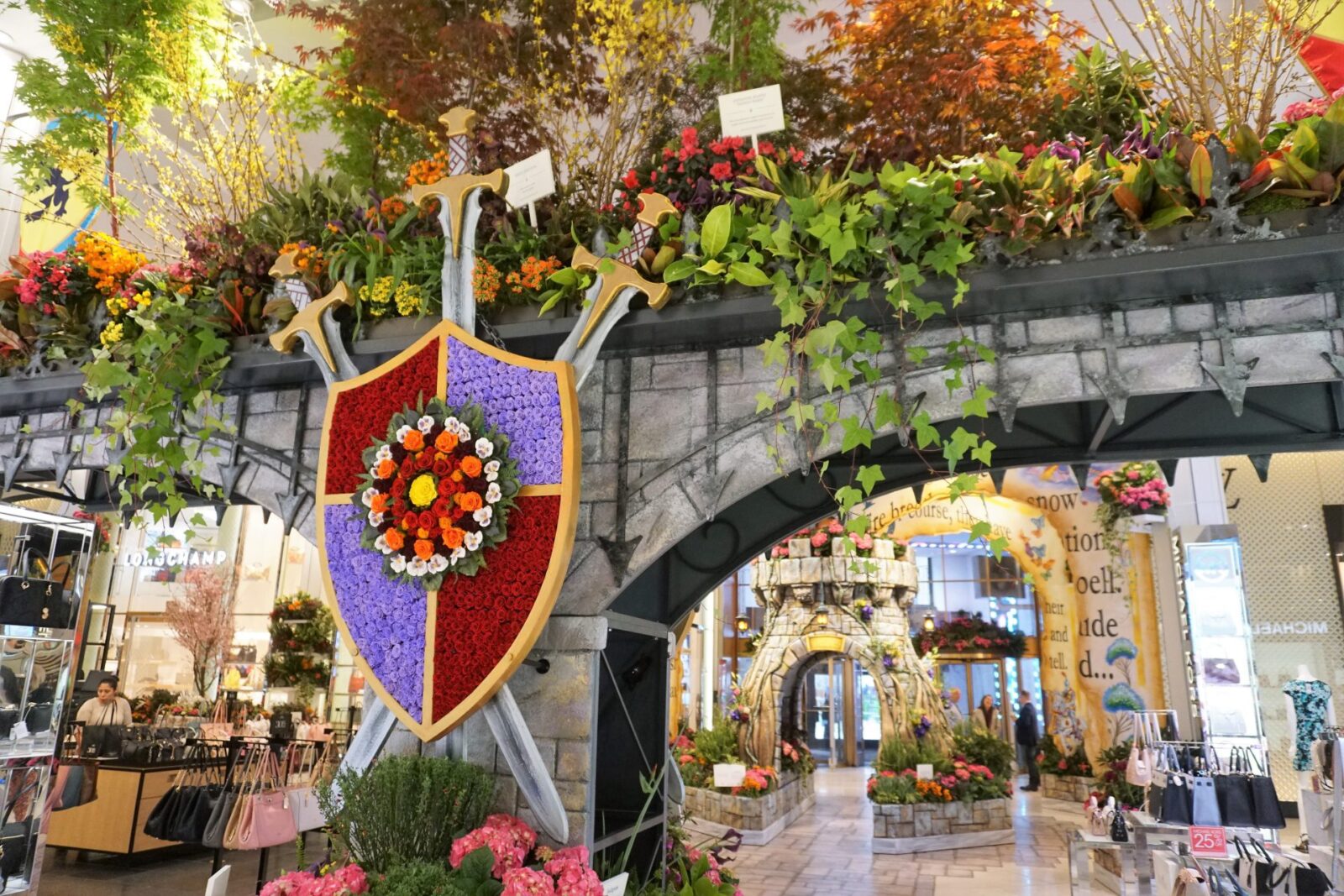 In the spring, Macy’s hosts its annual flower show, the Macy’s Flower Show. You can just wander around on your own and see hundreds of species of flowers and trees, or you can do it with an English-speaking guide. Tours run every 20 minutes and are completely free. The exhibition is divided into five gardens, each displaying plants from a different continent. On Macy’s website, you can find out what other events will be held at the same time (often these are themed fashion shows, or provide additional discounts on shopping, or workshops about flowers, art, and fashion). 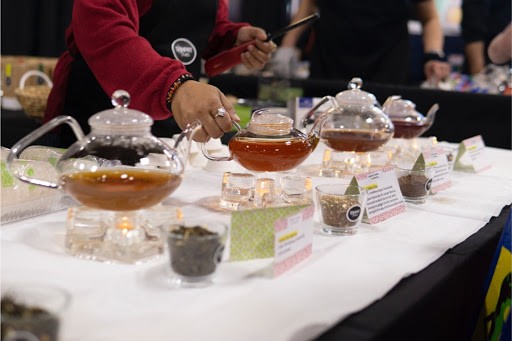 All about tea and coffee, new products, professional news, tastings, master classes, and warm spirits. Read more about the event on its website.

Beauty and horror co-exist in the Howarden Pindell exhibit

The Shed space should have hung a shock content warning at the entrance to the “Howarden Pindell. Rope/Fire/Water” with a warning about shock content. But not at all to protect the innocent from violent or sexual content, but to – knowing human nature – attract more visitors to the show.

It all starts with beauty. The colorful abstractions on the unstretched canvases are at first perceived as fabric-like minimalist blotches of pastel tones.

The earliest canvases date back to the 1970s, when Pindell became the first black woman to take over as curator of the Museum of Modern Art (MoMA) in New York. The floor of its baguette shop suggested to her such materials as hole-punched confetti, which enlivens seemingly smooth surfaces with texture. The combination of colors, fibers and sequins lulls the viewer into a state of contemplative comfort.

A view of the installation Four Little Girls in The Shed space. Photo: Kelly Marshall and The Shed

But it doesn’t last long. A pair of grim mixed-media works catapults the exhibition straight to its real theme: interracial violence. “Four Little Girls” references the 1963 bombing at a Birmingham Baptist church in Alabama, which was a milestone on the way to the Civil Rights Act of 1964. Photos of the dead girls are placed in the center of a black wreath between two columns, one listing other desecrated churches with a black congregation and the other listing the number of victims of massacres of blacks by white racists in the early twentieth century. On the floor near the unframed canvases lie charred objects, toys, shoes, clothing, like relics thrown down the drain.

Columbus, paired with this work, describes the crimes of imperialism, including the chopping off of the hands of black laborers practiced in the Belgian Congo. Beneath the chalkboard-like canvas, the hands of black mannequins are laid out in the shape of twigs gathered for a fire. Brrr!

At the end, the viewer walks up a ramp leading to the hall with the main piece, a harrowing 16-minute video recounting the history of the Lynch trial in America. Pindell’s dry recounting of the facts doesn’t need judgmental commentary, she doesn’t provide it. The idea is to get a feel for how it really was.

The New York Museum of Modern Art (MoMA) exhibition “Engineer, Agitator, Constructor. The Artist Reimagined” is timed to coincide with the transfer to the MoMA’s graphic arts collection of a major body of Merrill Berman’s collection, considered one of the most outstanding selections of political art. The exhibit introduces the viewer to a variety of experiments in graphic design, illustration, propaganda, and advertising from the early twentieth century, from John Hartfield’s sketches for Communist posters to Kurt Schwitters’ little-known layout designs and Lubov Popova’s remarkable linocuts and collages. Here are numerous examples of art seeking to convey ideas to as wide an audience as possible, whether in support of capitalism, communism, or revolution.

Berman’s attention to the creative kitchen of artists is nothing short of admirable. For example, his collection includes the entire series of sketches by Bart van der Leck for a Delft salad oil advertising poster. “He knows how to speak the language of abstraction,” explains curator Jody Hauptman, “and he tries his best to use it to sell that butter. Conversely, Popova, “who has been called a construction artist,” reinterprets abstraction for radical, political purposes. Parallels with the art and storytelling of our time are self-evident. 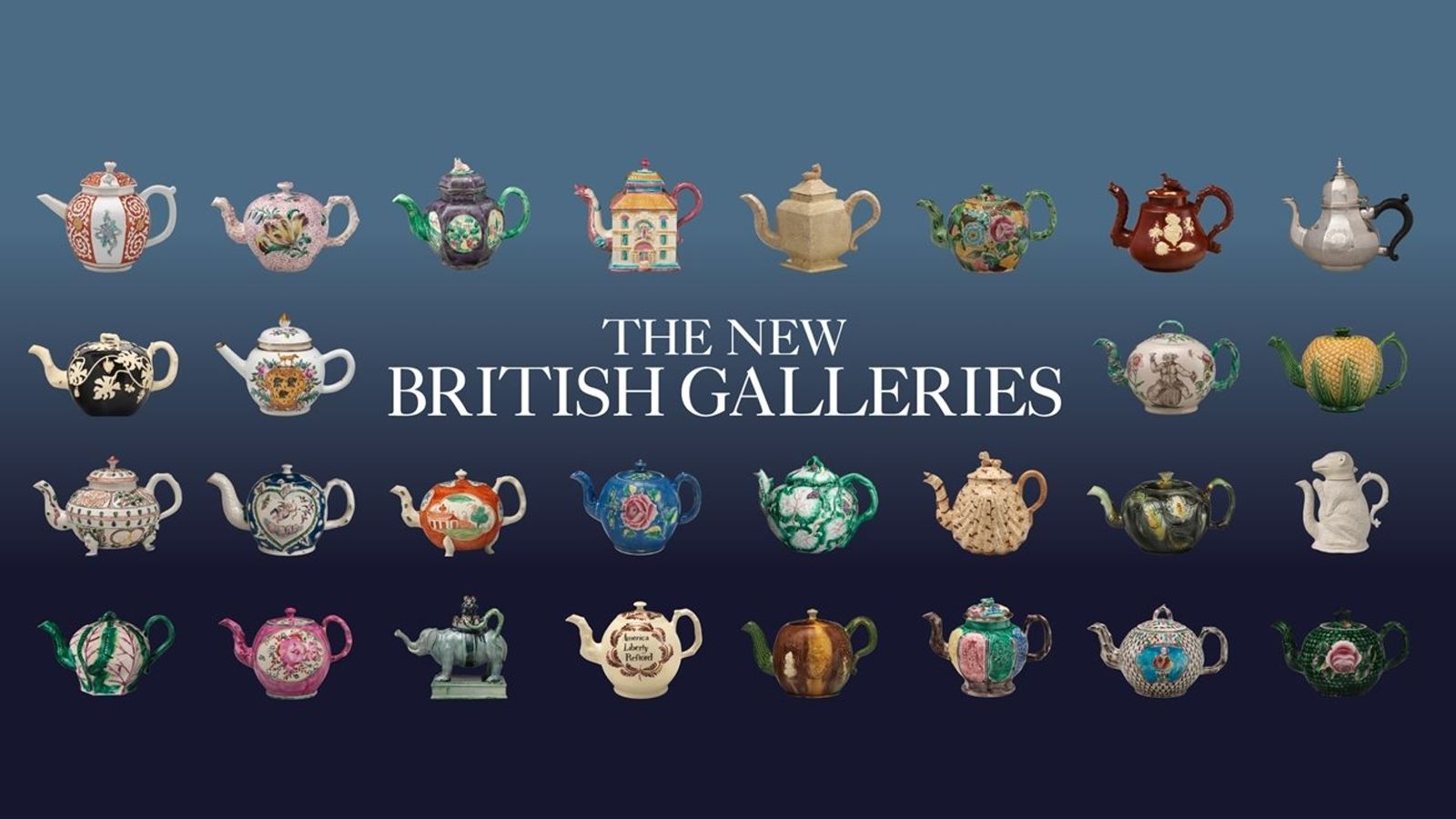 The re-opening of The Met’s British Galleries is one of the highlights of the Museum’s 150th anniversary—11,000 square feet devoted to British decorative arts, design, and sculpture created between 1500 and 1900. The reimagined suite of ten galleries provides a fresh perspective on the period, focusing on its bold, entrepreneurial spirit and complex history.

The British Galleries exhibit almost seven hundred works of art, including a large number of new acquisitions, particularly objects made in the nineteenth century that were purchased with this project in mind. A prominent new entrance provides direct access from The Met’s medieval galleries, creating a seamless transition from the Middle Ages into the Tudor Renaissance.

A seventeenth-century staircase with exquisite naturalistic carvings—brought to The Met in the 1930s from Cassiobury House, a now-lost manor house—has been meticulously conserved and re-erected like an enormous jigsaw puzzle. Three magnificent historic interiors from Kirtlington Park, Croome Court, and Lansdowne House have been transformed by painstaking restoration and new lighting, and remain at the heart of the galleries. The visual exuberance of the eighteenth century is explored through one hundred English teapots displayed in two twelve-foot-tall semi-circular cases, as well as a huge “retail case” containing an array of enameled candlesticks, silver toys, nécessaires, and gold boxes.

A New Look at Old Masters 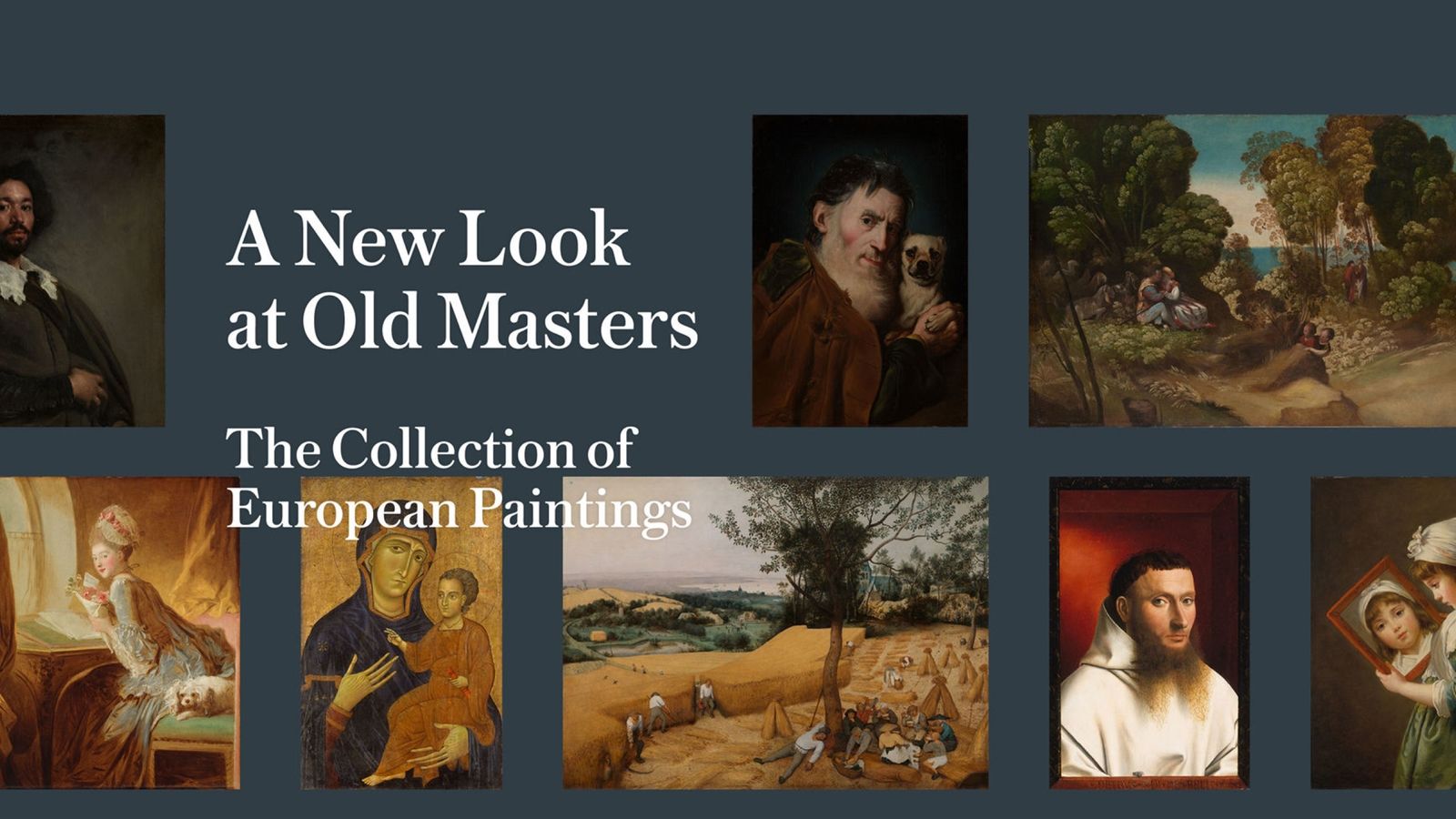 Through Spring 2022
The Met Fifth Avenue

A New Look at Old Masters will explore a variety of themes in The Met’s collection of European painting, creating new dialogues among the works and including a large presentation of sculpture.

While one gallery will highlight the creation of still life and genre painting in the sixteenth and seventeenth centuries, two others will provide an overview of oil sketches from the sixteenth through the eighteenth centuries, leading up to the Museum’s unsurpassed collection of works by Giovanni Battista Tiepolo. A large gallery will display portraiture in the Grand Siècle, juxtaposing outstanding paintings by Peter Paul Rubens and Anthony van Dyck with Charles Le Brun’s monumental family portrait of the banker Everhard Jabach.

The eighteenth-century French galleries will take up such themes as the study of expression, François Boucher and the decorative arts, and the role of female artists, who finally found a place in the academy. The Met’s unique collection of French Neoclassical painting, dominated by gifts from Jayne Wrightsman, will be installed with sculptured busts by Jean Antoine Houdon of the essential figures of the Enlightenment: Denis Diderot and Voltaire.

These are just a few examples of the novel themes that will be on display.

A timeline of the $450m Salvator Mundi: centuries of deals, disputes and drama