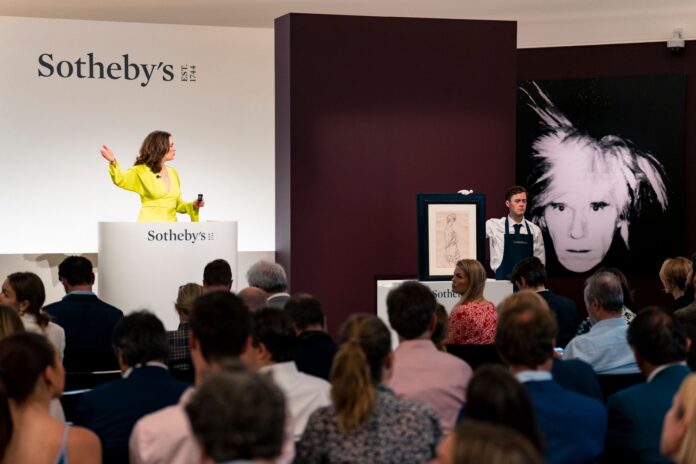 Sotheby’s Modern and contemporary art sale yesterday was a study of extremes, but ultimately fell short of its estimate of £70m-£101m, bringing in a lacklustre £64m (£76.8m with fees).

At times there were bidders almost jumping out of their seats and experts wildly gesticulating while whispering into their phones and holding out shaky hands to try and get another bid in. At other times, especially during the latter half of the sale, many of the experts who were manning the phones looked slightly bored, their heads down, texting, chatting to each other or casually flipping through what was presumably the printed catalogue.

That does not mean there was no excitement. The sale started off at a gallop, with the first five lots spurring fast-paced bidding from the phones, the floor and online. Michel Majerus’s new comer (2000) opened the sale and sparked a snappy bidding battle between specialists Bame March and James Sevier, with some added competition from the floor. The picture sold for £190,000 (£239,400 with fees) against a £150,000 high estimate to the bidder on the phone with Sevier. Next was golden lion winner Simone Leigh’s Blue/Black (2014), a terracotta and porcelain bust that looks both ancient and futuristic. The sculpture sold for well above its high estimate of £300,000, hammering at £490,000 (£617,400 with fees), after a lengthy battle between David Galperin, Julian Gascoigne, Gregoire Billault and Oliver Barker, who worked in the trenches while Helena Newman took command of the rostrum.

Gagosian’s new recruit Anna Weyant’s elegant still life Buffet (2020) came next and within a minute or two doubled its high estimate of £150,000. An absentee bidder swatted away the competition at first with what turned out to be a £200,000 bid, but the pressure kept coming, as did the bids. The picture ultimately hammered at £370,000 (£466,200 with fees). The fourth lot, René Magritte’s eerie La Saveur des larmes (1938 or 1939) was the first lot to break £1m, but also foreshadowed the latter half of the sale when the excitement had dissipated in the room. The picture hammered at £1.3m (£1.6 with fees). Bidding was slow and felt conspicuously drawn out for Study for Clouds (Contre-jour) (1970), an ethereal picture populated with transluscent clouds by Gerhard Richter. With an estimate of £6m-£8m, the canvas eventually hammered at £8.4m (£11.2m with fees) to a bidder in the room.

Andy Warhol’s Self Portrait (1986) was one of the most impressive lots but did not bring in as much as expected. The estimate was £12m-£18m and it barely sold after a round of bidding that was over almost as soon as it began. Newman opened the bidding at £10m, and the picture hammered at £11m (£12.7m with fees).

Still, more than 50% of the of the works sold above the high estimate. But the pace that introduced the sale, almost exclusively for the red-chip artists that have been commanding the market for the past couple of years, proved to be unsustainable. Indeed, for a sale that had more than 40 lots, only nine went unsold—but six of those were among the last 12 lots, among them Andreas Gursky’s Chicago, Board of Trade III (1999-2009), Camille Pissarro’s charming Statue d’Henri IV et hôtel de la Monnaie, matin ensoleillé (1901) and Eugène Boudin’s Trouville, l’heure du bain (1881).

Meanwhile, the preceding Jubilee Auction of British art brought in £61m (£72.3m with fees), again noticably short of the £73m-£99.9m estimate. Here, a 1964 portrait of Lucian Freud by Francis Bacon accounted for more than half of the sale’s value, achieving £43.4m with fees.

Here’s Why Online Gambling is Getting Popular