Home News Artist Vanessa Beecroft Has Installed a Tribute to a Lost Caravaggio in... 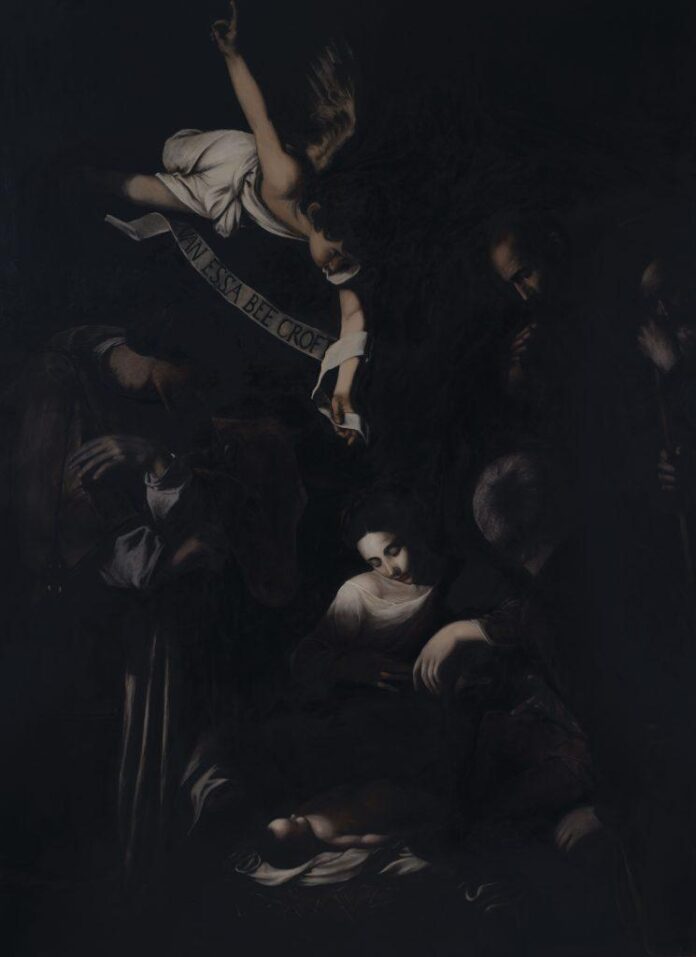 The original stretcher out of which Caravaggio’s Nativity was cut in a 1969 mafia heist still hangs, like an open wound, in an antechamber of the Oratory of Saint Lawrence in Palermo.

The small deconsecrated church in the heart of the city’s historical center housed one of Sicily’s two Caravaggios from 1600 until a rainy October night three and a half centuries later, when it was removed without a trace. Never recovered, the painting, Nativity With Saints Lawrence and Francis of Assisi, is listed at number two on the FBI’s list of most wanted artworks (after looted Iraqi artifacts).

Conflicting statements by Cosa Nostra informants—that the painting had been sliced up and fed to pigs, used as a floor mat, or rolled up in such a way that the oil paint cracked—only add to the mystery surrounding its condition, and whereabouts, more than half a century since the theft. In 2015, a hi-tech photographic replica was installed inside the original empty frame, returning some integrity to the Oratory’s interior, which was created by Baroque master Giacomo Serpota some 100 years after the painting’s completion to depict, in elaborate stucco works, the lives of Saints Lawrence and Francis seen in Caravaggio’s masterpiece. 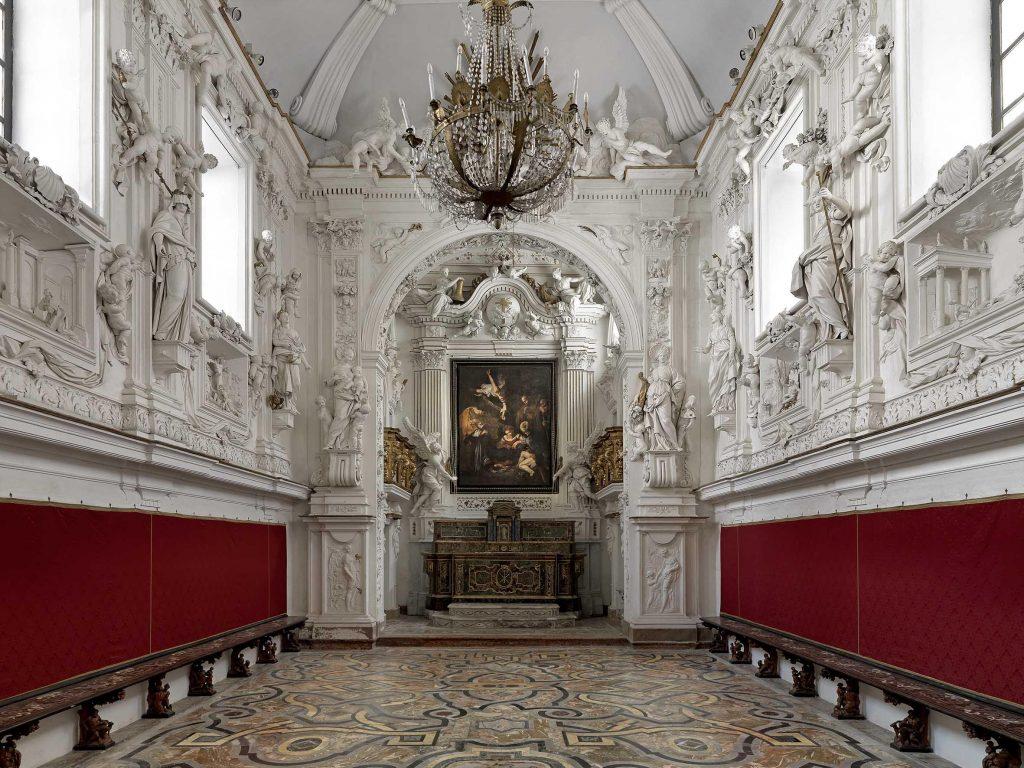 The Oratory of Saint Lawrence in Palermo. Courtesy of the Amici dei Musei Siciliani

On Christmas Eve, following Midnight Mass, Vanessa Beecroft unveiled a new artwork inside the Oratory that pays tribute to the lost Caravaggio—and the city of Palermo.

The Los Angeles-based Italian artist has a longstanding relationship with the city, where she staged a performance with live models in 2008, and has recently returned to the Sicilian capital to create another one of her Tableaux vivants, titled VB94, inside the 15th-century Palazzo Abatellis, which houses the Regional Gallery of Sicily. That commission, co-organized in early December by the non-profit association Amici dei Musei Siciliani (Friends of the Sicilian Museums), led to another invitation by the association, which also manages the Oratory.

Every year since 2010, the organization’s president, Bernardo Tortorici di Raffadali, invites a different contemporary artist to reinterpret the missing Caravaggio as part of an initiative called NEXT. Artists are generally given a carte blanche but for one restriction: the original dimensions be respected so that the contemporary piece can fit into the frame above the altar. Over the years, the commissioning body’s focus has been on local names; Beecroft is the first internationally renowned artist to create a new work for the Oratory. 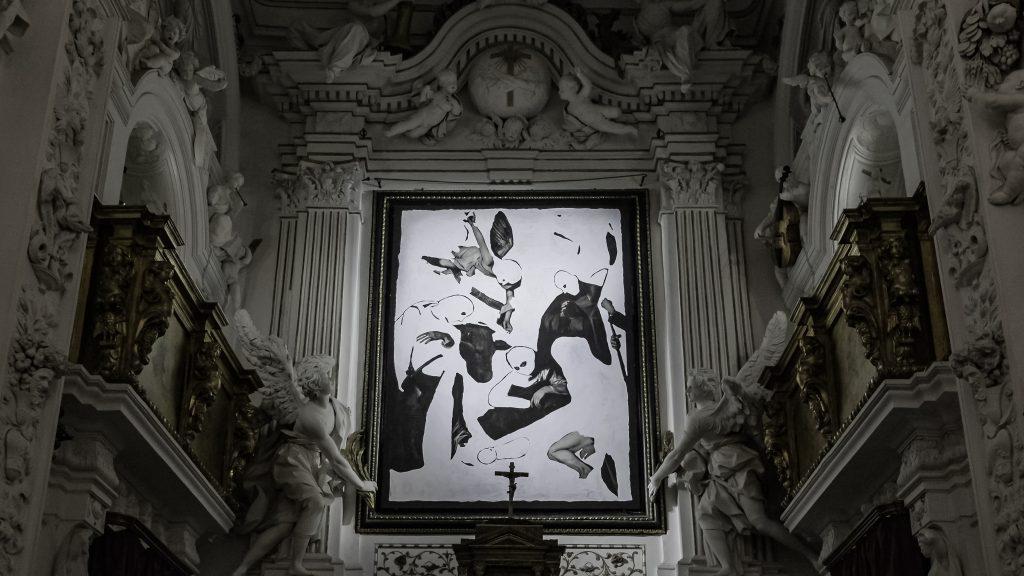 “I’m so honored for having been chosen for this wonderful initiative,” Beecroft told Artnet News in a statement. “After VB94, it is a pleasure to return to Palermo, a city that has shown a warm welcome and a deep understanding of my work.”

Beecroft’s interpretation of the nativity scene consists of a slight yet significant manipulation. In her photographic reproduction, she envelopes the figures of Saint Lawrence and Saint Francis, as well as Joseph and a male pilgrim, in darkness. In fact, the four men are nearly blacked out of the scene. By contrast, Mary, baby Jesus, and a figure representing the Holy Spirit are each encircled by light, as if illuminated with a spotlight from within the Oratory.

The artist, who is a mother of four, has focused throughout her career on the ways in which women are represented in art history, subverting and reclaiming the gaze on female bodies. Her interpretation of Caravaggio’s Nativity continues this ethos. “With my Nativity, I want to respect the iconography of Caravaggio,” Beecroft said. “I therefore chose to leave the Divine in the light, and to overshadow the human figures of this artwork.” 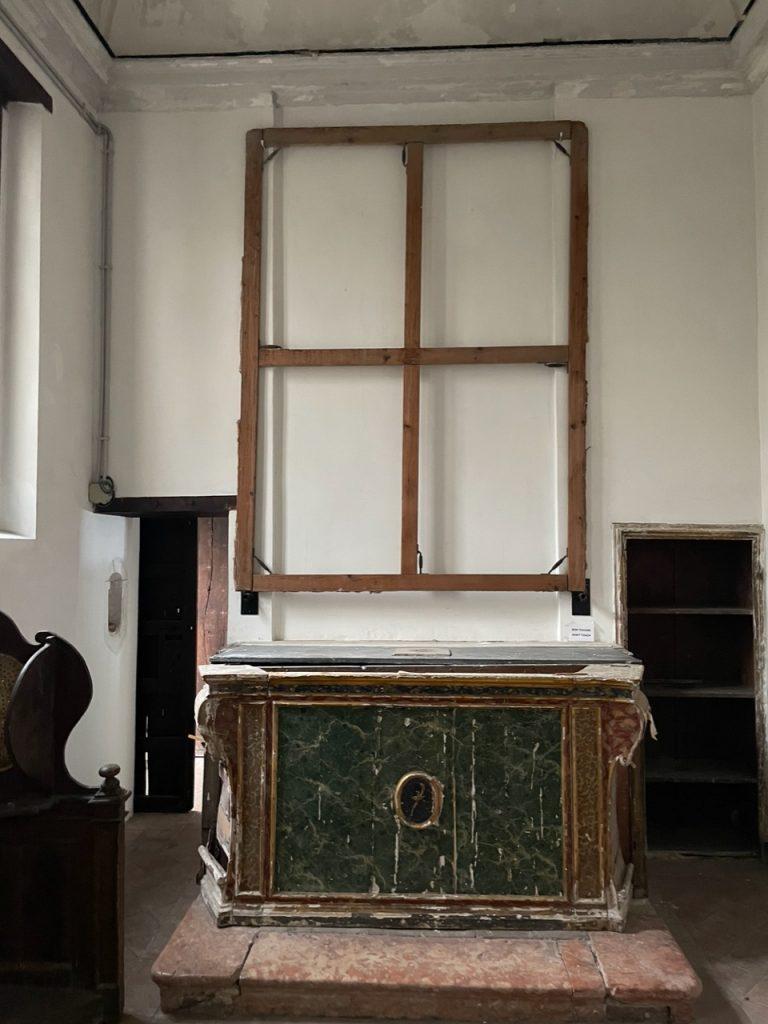 The empty stretcher in an antechamber of the Oratorio San Lorenzo. Photo by Hili Perlson

Bernardo Tortorici di Raffadali, president of the Amici dei Musei Siciliani, thanked the artist for taking on the challenge of “the immense figure of Caravaggio, as well as his absence.” He described the art commission as “a sort of a ritual omen, in the hope that it can be a propitiatory action for the recovery of the stolen masterpiece.”

Vanessa Beecroft’s work will hang inside the Oratory of Saint Lawrence until October 17, 2023, which marks the date of the theft some 54 years ago.