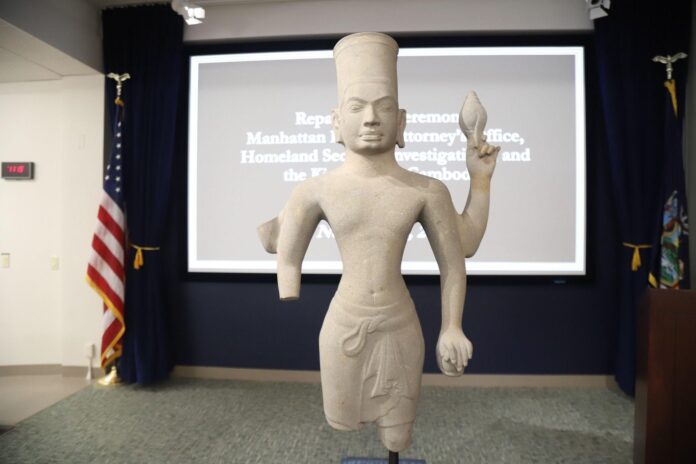 The Manhattan District Attorney’s office last week returned a stolen vishnu to Cambodia, nearly 30 years after looters removed a sacred figure from a seventh-century temple. The Standing Sandstone Vishnu was smuggled into Manhattan in 1995 under the orders of Doris Wiener, a dealer and well-known antiquities trafficker. The piece was returned during a repatriation ceremony attended by Cambodian Ambassador to the United States Keo Chhea on 2 November.

“This antiquity was callously ripped away from an ancient temple so it could be sold for profit,” District Attorney Alvin L. Bragg, Jr. said in a press release. “After it was illegally circulating on the art market and in a private collection for years, our Antiquities Trafficking Unit, in collaboration with our law enforcement partners, are finally returning this piece home.”

According to the DA’s office, the Standing Sandstone Vishnu was broken and looted from an Eastern Cambodia temple, and Wiener and an unnamed co-conspirator had the work restored. It was smuggled through Thailand and sold to a private collector in Manhattan.

Wiener, who died in 2011, first travelled to Southeast Asia and India in 1966, and soon after began organising exhibitions of sculptures and paintings from the regions at her eponymous gallery on the Upper East Side. Her obituary notes that her clients included John D. Rockefeller III, Igor Stravinksy and Jacqueline Kennedy, and that “iconic works of art from The Doris Wiener Gallery formed the basis of many major museum collections of Asian art world-wide. These include The Metropolitan Museum of Art, The Cleveland Museum of Art, The Norton Simon Museum of Art, Asia Society and The Brooklyn Museum, among others”.

Erin Thompson, an associate professor of art crime at the John Jay College of Criminal Justice, is among the many voices pressuring institutions and individuals to scrutinise their collections for potential looted art. “If I were a private collector holding something I bought from a Doris Wiener collection or her gallery, I would get in touch with Cambodia or Nepal or India,” she told Artnews.

Other critics of Wiener include investigative journalist Jason Felch and India Pride Project, a volunteer group dedicated to identifying stolen artworks from India. Since 2017, they have issued calls to track down objects tied to Wiener and her daughter, Nancy Wiener, who in 2021 pled guilty for her role in trafficking looted artefacts, and selling them through her gallery to collections around the world. Several museums including the Museum of Fine Arts Boston and the Art Gallery of New South Wales have contacted Felch about objects in their collections acquired from the Wieners.

The Cambodian government has also been urging institutions, many in the US and the UK, to return looted relics. At the Metropolitan Museum of Art, for example, officials have identified dozens of artworks that they say were plundered, some by the British-Thai businessman Douglas Latchford. The museum has said that it has not received evidence demonstrating that the works in question had been stolen. According to its online collection, the Met also owns more than a dozen sacred works from Cambodia, India, Nepal or Thailand associated with Doris Wiener, and at least two with Nancy Wiener. Among these is a “Standing Female Diety [sic]”, gifted by Doris Wiener in 2003, whose feet are missing and is currently on view in the museum’s Florence and Herbert Irving Southeast Asian galleries. Thompson has been calling for the Met to return the 10th-century goddess, sharing, as evidence of its looting, photographs of the statue’s feet still attached to its pedestal.

The repatriation of Standing Sandstone Vishnu is the latest success in efforts to bring stolen objects home to Cambodia. In August, Homeland Security Investigations returned 30 Bronze Age antiquities, stolen by Latchford, to the Southeast Asian country. And last year, the Manhattan DA’s office returned 27 relics valued at approximately $3.8m, three of which were tied to the investigation of Nancy Wiener. The remaining 24 were linked to disgraced dealer Subhash Kapoor, who on 2 November was sentenced to ten years in prison for leading a smuggling ring.

“The artefacts that have been repatriated—and others that I am sure will be repatriated in the future—are a vital part of our cultural legacy and our sense of nationhood,” Chhea said this week. “They were looted from places where they had been situated in peace for centuries, and they belong in Cambodia.”