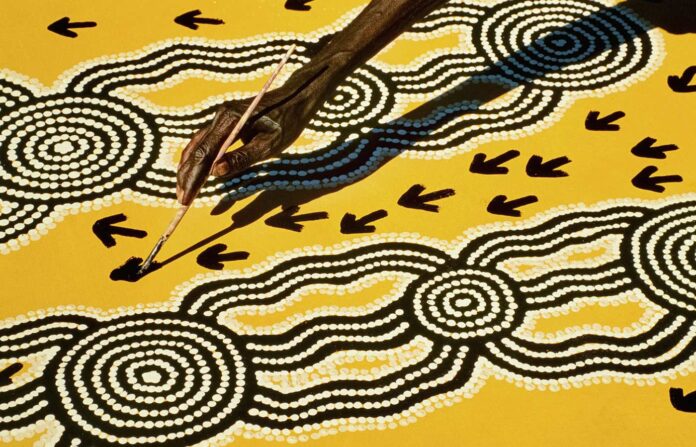 Aboriginal art is art created by Indigenous Australian people. It includes works done in a variety of ways, including leaf paintings, wood carvings, rock art, sculpture, ceremonial clothing, and sand painting. Aboriginal art is closely associated with religious ceremonies or rituals. It is an important part of the world’s oldest continuous cultural tradition.

Australian Aboriginal art is the oldest living art tradition in the world. The earliest works of art were rock carvings, body painting, and grinding, which date back over 30,000 years.

Symbols in aboriginal art are used to show different things. Although the meaning of these symbols is often general, they can change meaning within the same work, and they can be different for different groups. Aboriginal art is a language in itself, communicating through beautiful patterns. It started about 30,000 – 40,000 years ago.

Some Aboriginal artists sell their work for a lot of money. In 2007 Pitjantjatjara artist Yannima Pikarli Tommy Watson sold the painting for $240,000.

The Australian Aborigines do not have a written language. Therefore, in order to pass on their important cultural stories from generation to generation, they use their aboriginal art symbolism.

Aboriginal symbols in art vary from region to region, are generally understandable, and form an important part of Australian Indigenous art. For thousands of years, Aboriginal people have used artistic designs and symbols to convey stories and messages that are incredibly important to their culture.

Most of the symbols in aboriginal art are relatively simple. But in order to tell a more complex story, they are used in more complex combinations. Traditional Aboriginal dot drawings represent a story. This story is usually about hunting or gathering food and usually has aboriginal art symbolism. These symbols, when explained, give the picture a whole new meaning.

The use of dots gives a unique character to the art of the Western Desert. The dots symbolize stars, sparks, scorched earth, etc., as the Aboriginal painting is based on the organization of the earth and the ancestral connection with it.

Even before Indigenous Australian art was transferred to canvas, Aboriginal people smoothed the ground to paint sacred patterns related to that particular ceremony. Body paint was also used. It had a meaning associated with sacred rituals. These drawings have been circled and circled with dots.

The uninitiated never had a chance to see these sacred designs, as the ground was smoothed again and the painted bodies were washed. This was not possible with pictures.

Aboriginal artists used aboriginal art symbolism to mask the sacred patterns so that Westerners could not understand their true meaning.