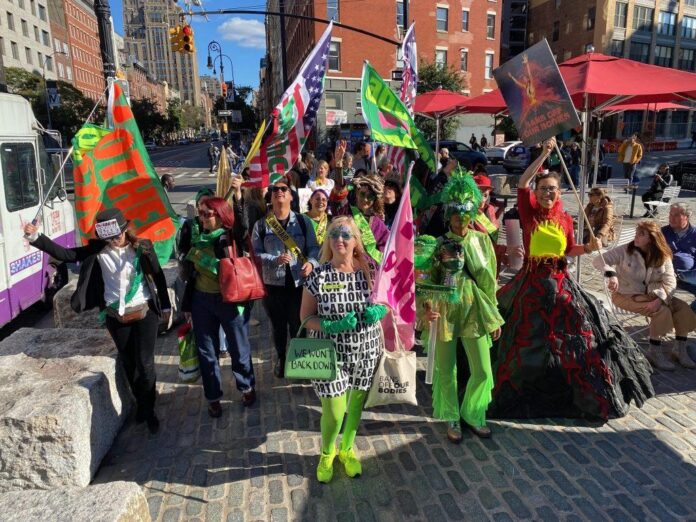 On June 24, the U.S. Supreme Court overturned its landmark 1973 case , ruling that there is no constitutional right to abortion and giving states the ability to outlaw the procedure—which 13 have already done.

The highly divisive issue has galvanized many artists and activists who have long recognized the importance of protecting reproductive freedom. For Oakland artist Michele Pred, it only underscored the importance of art as a tool for facilitating dialogue, allowing people with differing views to have productive conversations about abortion.

“You can be an activist with love rather than hate,” Pred told Artnet News. “We can really move forward with civic discourse.”

That was the motivating factor behind the , a performance art piece staged on October 8 by Pred and the (Re)Sistxrs collective, a group of feminist artists that traces its roots to January 2016. That’s when five women joined Pred in bringing signs to an Oakland post office to mail “Her Body Her Business” t-shirts to the presidential candidates on the anniversary of the decision. 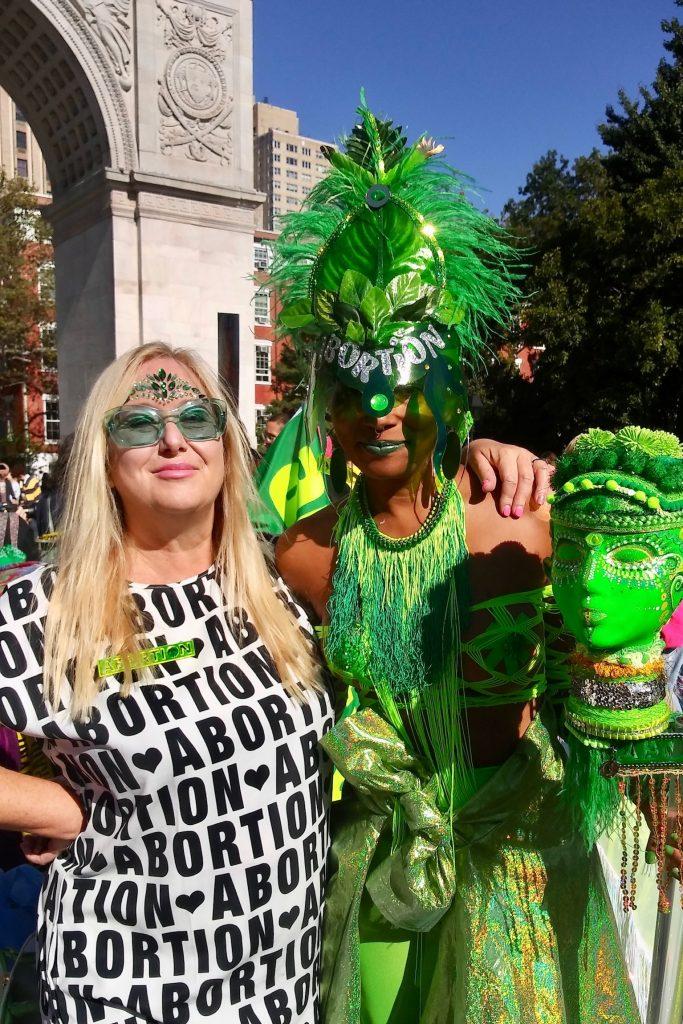 To date, Pred and the (Re)Sistxrs, with its core group of 11 other artists, have now staged 10 feminist art parades in New York, Miami, San Francisco, and Stockholm, Sweden.

I’ve attended six of them, and I’ve come to know the coterie of (Re)Sistxrs and other artists who reliably turn out for the occasion. Some of them travel long distances—Shireen Liane, who lives in London, brought several brightly colored flag art pieces that helped lead the march through the streets of New York.

“You’re the only one covering this movement,” writer, artist, and curator Coco Dolle said. “It’s important that women artists have a voice.” 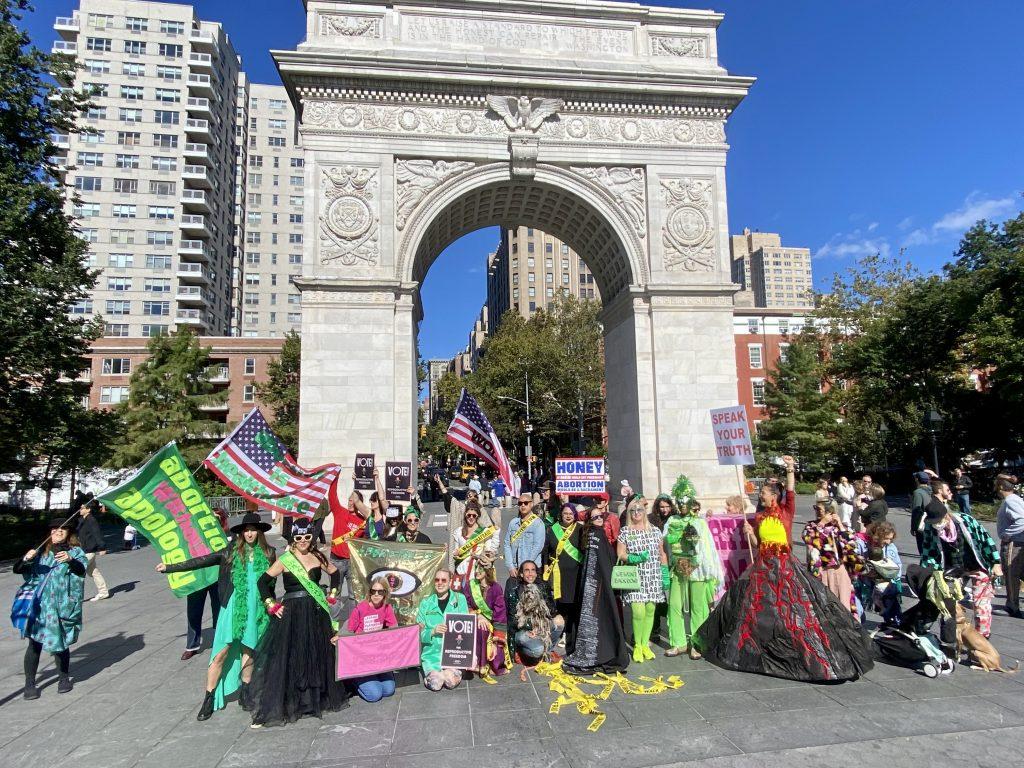 The , a performance art piece organized by Michele Pred and the (Re)Sistxrs collective, at Washington Square Park in New York. Photo by Sarah Cascone.

Processing from Washington Square Park to Nancy Hoffman Gallery on West 27th Street in Chelsea, where Pred’s solo show “Equality of Rights” is currently on view, participants were outfitted in green, the color representing the movement for safe and legal abortion. Some carried—or wore—artworks amplifying the parade’s message.

“Every time Michele puts out the call, I answer. She is my sister, ally, and mentor,” Wildcat Ebony Brown told Artnet News. She was selling wearable pieces from her “Abortion Rights Jewelry” collection, and had installed a verdant green throne at Pred’s exhibition for the day.

The first time Brown ever publicly declared herself as an artist—”coming out of her cocoon” in a vagina-butterfly outfit, as she put it—was at Pred’s 2018 parade. She’s since become a fixture of the (Re)Sistxrs, as well as a part of the artist collectives For Freedoms and the Wide Awakes, which teamed up with (Re)Sistxrs for their last New York outing, ahead of the 2020 election. 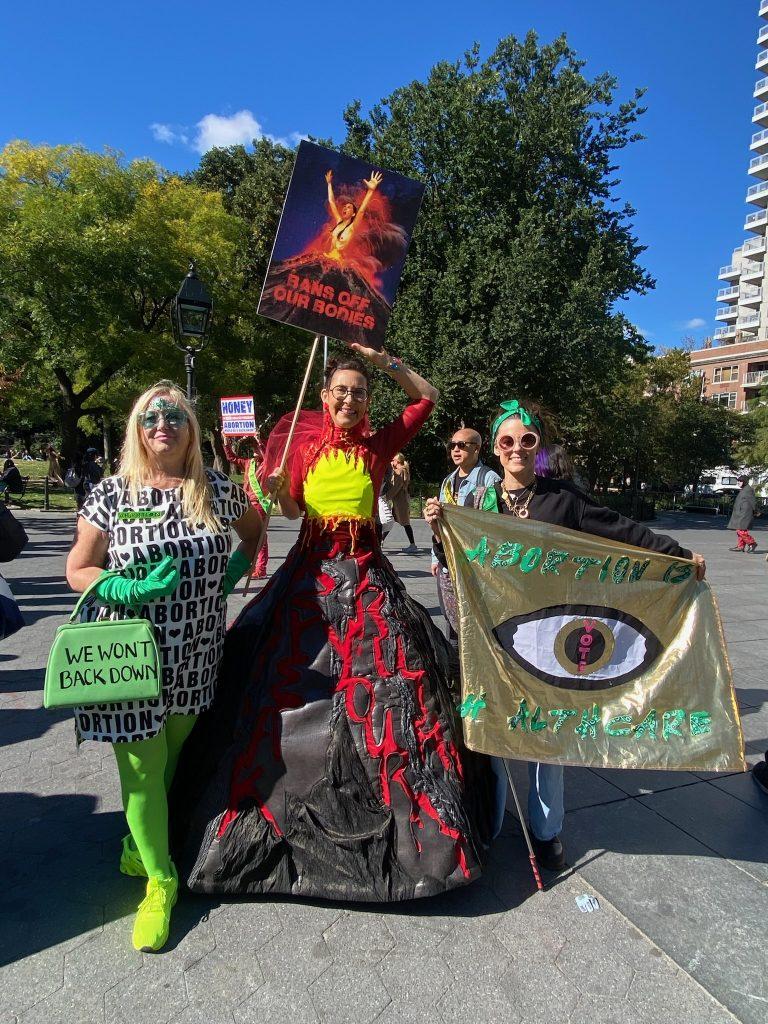 Another regular is Chicago artist Michelle Hartney, who is currently helming a communal art project called . It involves hand writing and then embroidering copies of historical letters women sent to Planned Parenthood founder Margaret Sanger in search of information about contraception.

Also incorporating handwriting into her work was Providence artist Ann Lewis, who brought up the rear of the parade in a long cape she had emblazoned with a new version of the Declaration of Independence——rewritten with women’s rights in mind.

“It reframes the Declaration to reflect our current situation in terms of bodily autonomy,” Lewis said. “King George was an oppressor, and this is the next step forward to free ourself from the people who made the last set of laws.” 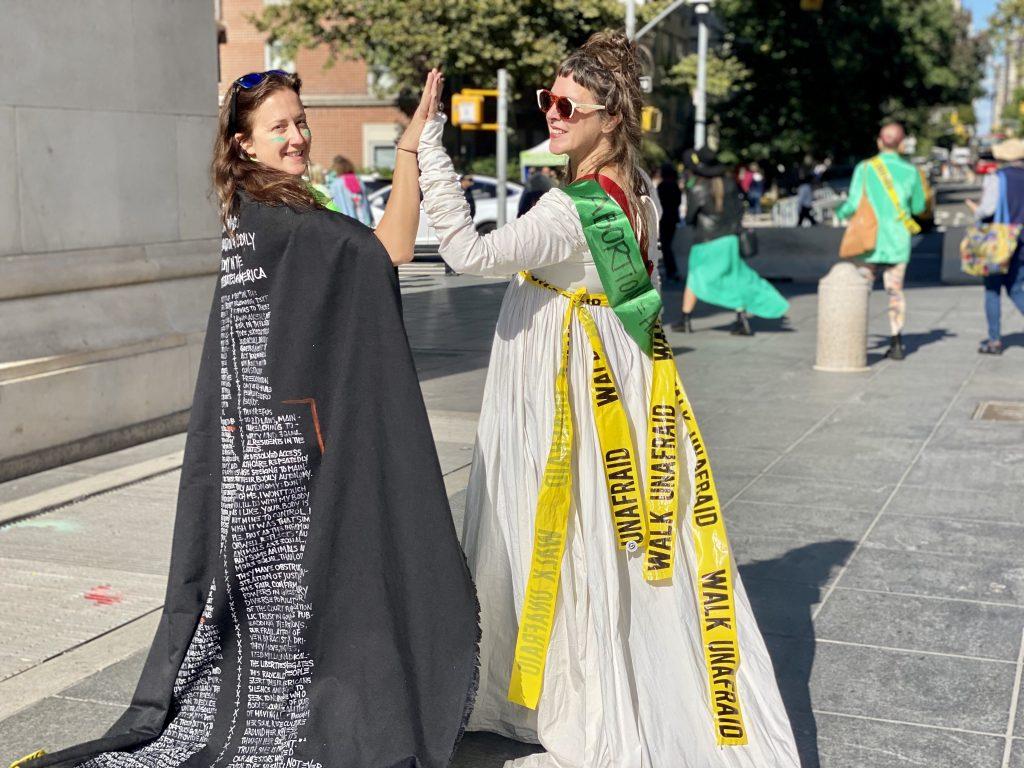 Ann Lewis and Gabrielle Senza at the in New York. Photo: Sarah Cascone.

New laws were also on the mind of artist and engineer Adelle Lin, who was wearing a digitally animated illuminated pendant she had designed, of a person looking up information about abortion on her laptop.

“People are tracking why we’re saying about issues like abortion, so we need to learn to protect our digital communication,” she warned.

Perhaps the most striking contribution to the parade came from Yvette Molina. She worn an enormous handmade hoop skirt in the shape of a volcano with lava dripping down the front to form the words “Speak Your Truth,” bringing to life her recent series of paintings of women as exploding volcanos. 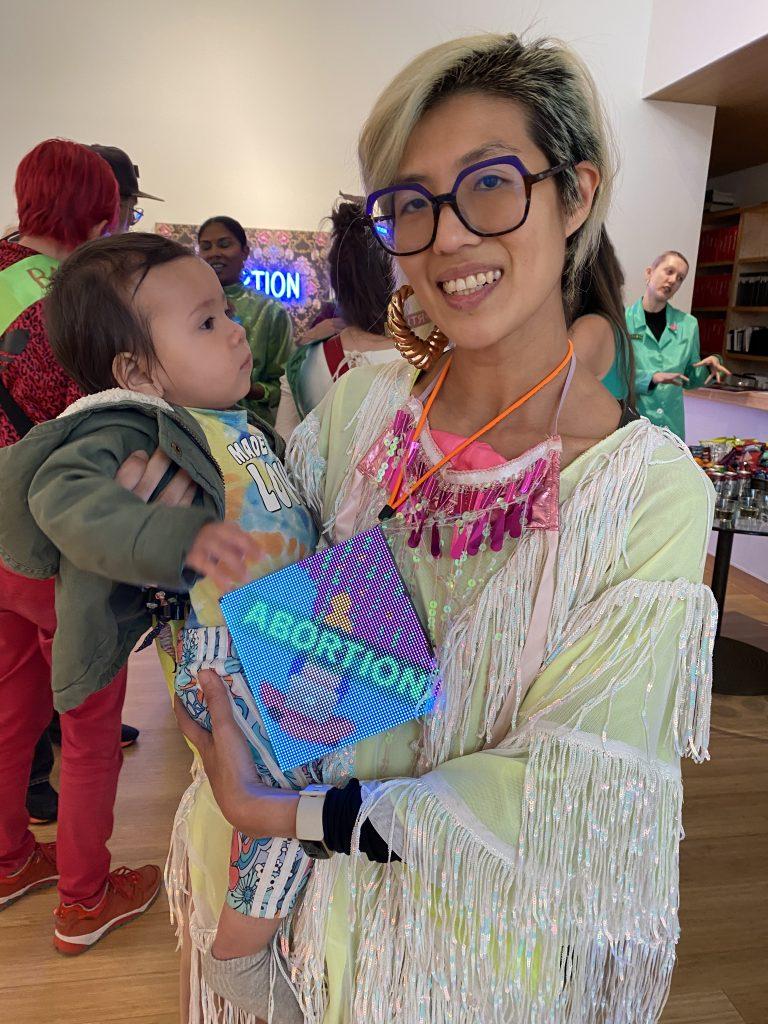 Adelle Lin at the reception following the in New York. Photo: Sarah Cascone.

“When we women speak our truths, we build new ground. And volcanos literally do that,” Molina explained. “Volcanos created the rich soil of the earth that is the nourishment and sustenance of living things on our planet. It’s not all fire and fury.”

What you didn’t see were any references to coat hangers or back alley abortions—inflammatory imagery that Pred specifically choses to avoid.

“Abortion is health care. It doesn’t have to be this negative bad thing,” she said, clutching one of her signature vintage purses, emblazoned with the slogan “We Won’t Back Down.” 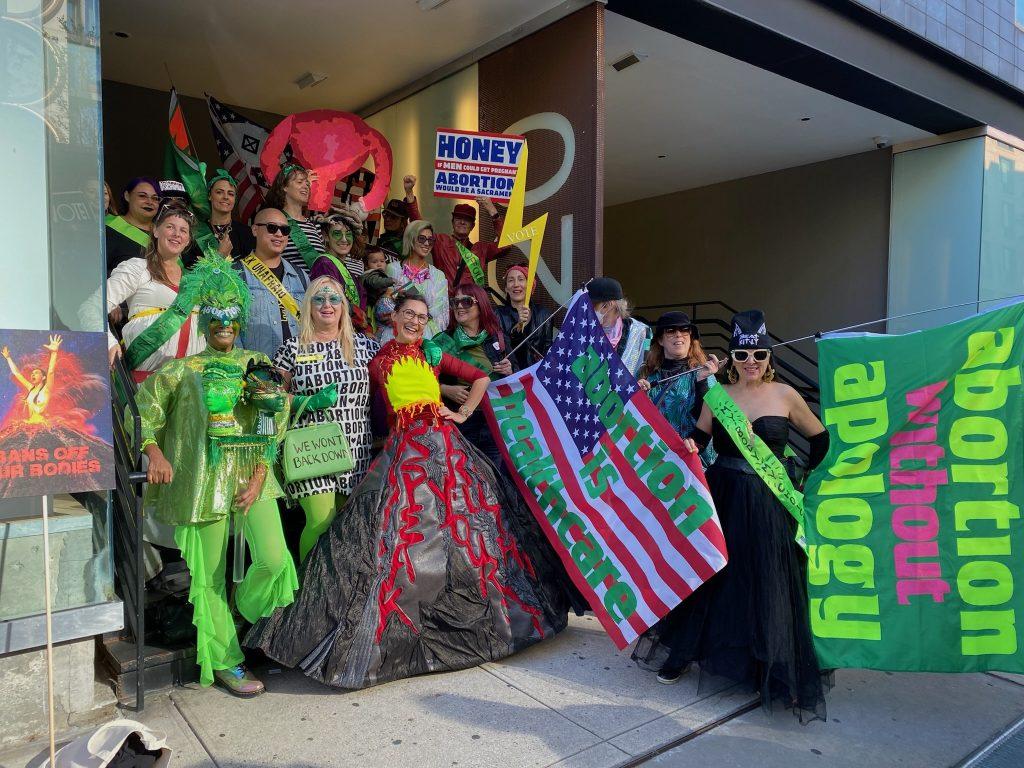 The , a performance art piece organized by Michele Pred and the (Re)Sistxrs collective at Nancy Hoffman Gallery in New York. Photo: courtesy of Michele Pred.

As the parade processed past sidewalk cafes and public plazas, the group was greeted by cheers and applause from likeminded New Yorkers already planning to take a pro-abortion agenda to the ballot box.

But Pred also wants to bring the conversation to parts of the country where abortion has already been outlawed, and where audiences might be less receptive to banners reading “abortion is normal” or “abortion without apology.” 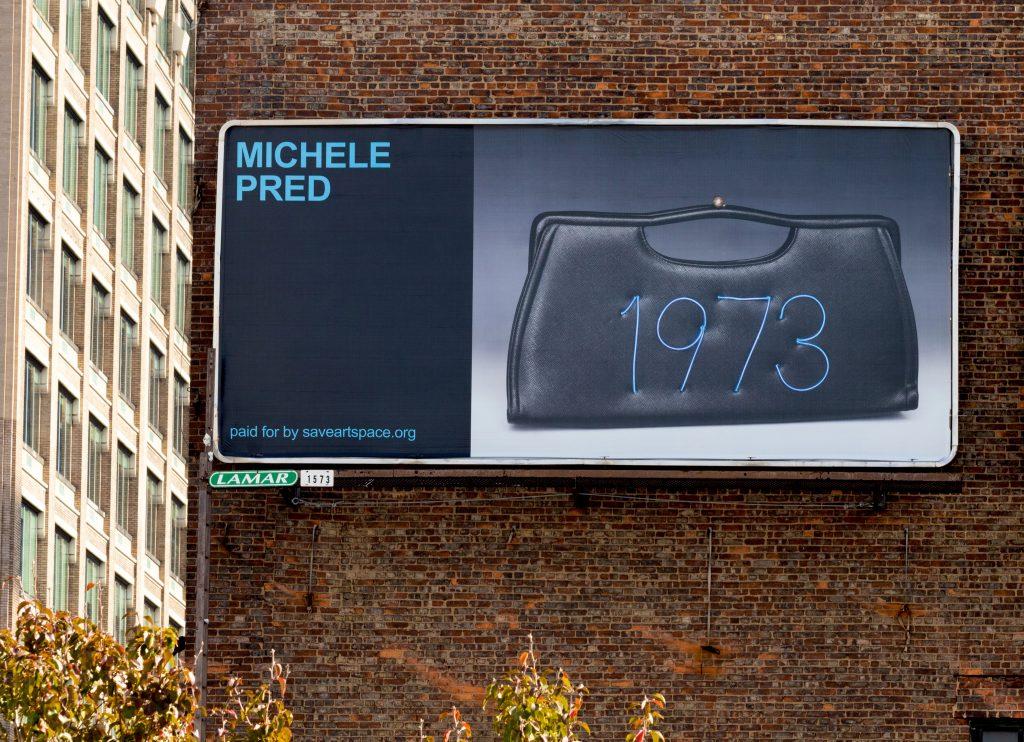 Michele Pred, . The billboard is on view in New York at West 46th Street and 12th Avenue. Photo courtesy of Michele Pred.

To address the issue on a national scale, Pred is curating a pro-abortion billboard art campaign with Save Art Space in 14 cities in 12 states. Her own contribution is currently on view at West 46th St and 12th Avenue in New York; others are by marchers Molina, Brown, and Liane, as well as Bud Snow, Holly Ballard Martz, Laney Baby, Lena Wolf and Hope Meng, and Viva Ruiz.

The goal is to reposition abortion as a healthcare issue, and to encourage voters to cast their ballots with reproductive healthcare in mind, electing politicians who not only support abortion as a legal right, but will create legislation that preserves safe and affordable access to abortion. 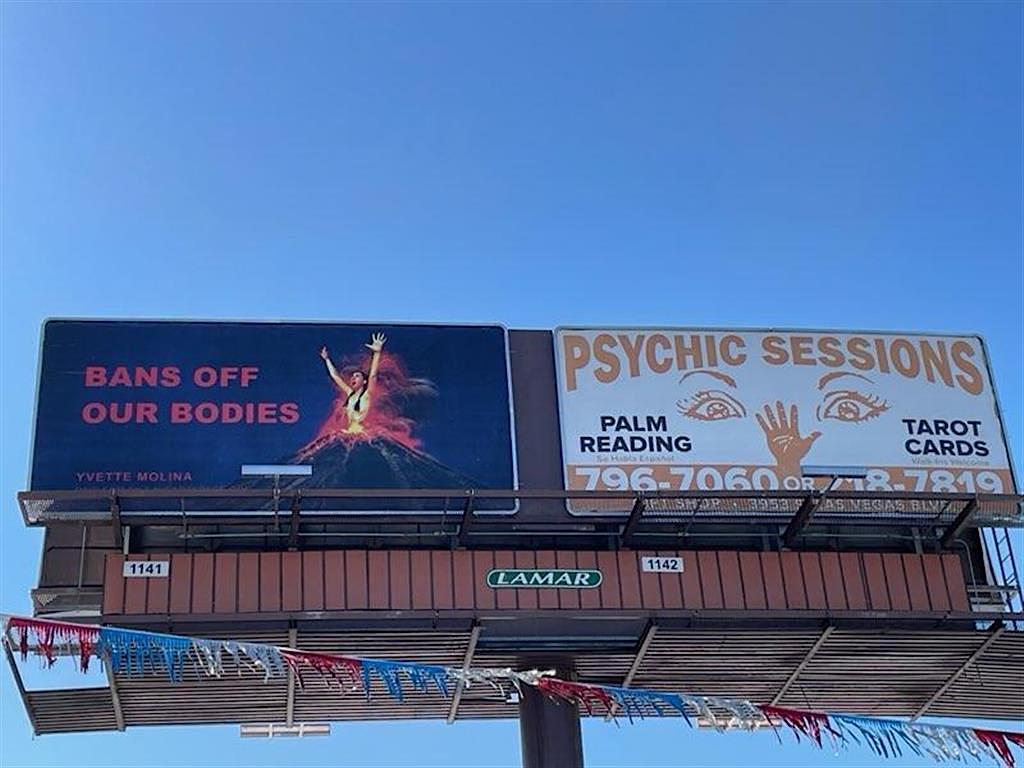 Yvette Molina, . The billboard is on view in Las Vegas. Photo courtesy of Michele Pred.

“It’s absurdly insane that we have to be here today standing for reproductive rights,” Brown said. “Our government is trying to take our rights, but we’re not going to stop. We’re going to keep fighting.”