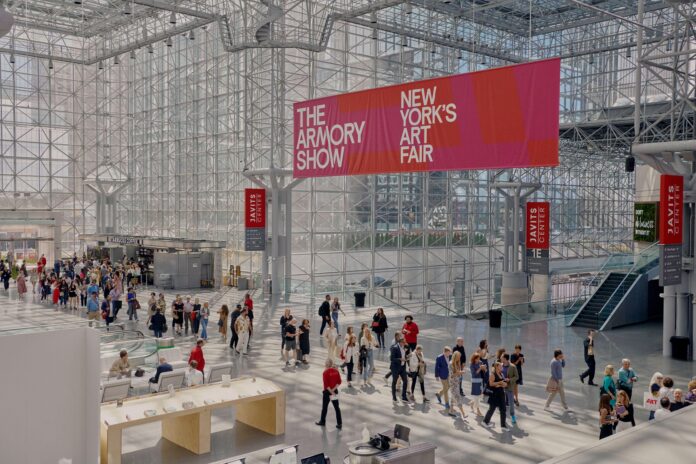 The Armory Show’s 2022 edition arrived in New York on 8 September and by all accounts the Javits Center, a convention hall that spans a mammoth four city blocks along Eleventh Avenue, was as much the centre of focus during the VIP preview as any of the stands within it. While it is quaintly billed as “New York’s art fair”, The Armory Show is easily as global as the last meeting of the United Nations Security Council.

At close to 250 exhibitors, the fair has added between 50 and 70 galleries from its days on the Westside piers and nearly 100 since last year, when the Covid-19 pandemic kept many collectors at home or at a pied-à-terre, swiping through pictures on an iPad while on the phone with their art advisor.

“We aren’t bigger just to be bigger,” says Nicole Berry, the fair’s executive director. “We are bigger because the demand is there and the space warrants it. This is what we envisioned for the fair. This floor plan feels right, with the wide aisles and the beautiful agora that connects the halls and has space for the Platform section’s wonderful works.”

One of the main benefits of this size is the growth in the Presents sector, which is dedicated to solo and duo presentations of recent work from galleries that are no more than ten years old. “I love walking through that section. These galleries are really the future of the fair. They take interesting risks,” Berry says. The size and international presence at the fair arguably put it in on par with Frieze and Art Basel, which are, debatably, The Armory Show’s only peers and competitors putting on events at this size and scope in the global art fair industry.

The fair this year leaned into the global theme by aiming its curatorial and programming spotlights on Latin America. The fair’s Curatorial Leadership Summit, an invitation-only event that brings together around 75 international museum directors and curators each year, was led by a figure who has done more than probably anyone to advance institutional recognition and understanding of Latin American art, Mari Carmen Ramírez, the curator of Latin American art at the Museum of Fine Arts, Houston. The fair’s curated Focus and Platform sections were also, in their ways, centred on galleries and artists from the Global South.

The connections made within that Latin American nucleus were the fair’s overwhelming success. Yes, there were galleries from Mexico City, Columbia and Puerto Rico, but also from Nigeria, Kenya, Ethiopia and South Africa. “The fair has a Latin American and Latinx focus, but not only,” says Tobias Ostrander, who curated the fair’s Platform section of large-scale installations. “But it’s really how those things interact with other thematics: Black artists, artists from the African diaspora, Indigenous artists. All of this has been on people’s minds.” The idea of interaction and, more importantly context, was the subtext throughout the curated sections of the fair. Ostrander drew inspiration for the section he curated from the prevalent decolonial discourse. Monuments to American Civil War generals, United States presidents and conquerors from the exploration age have been taken down all over the world in recent years, leaving artists and institutions to wonder what should replace them.

Many of the fair’s most powerful works are found in the Focus section, which was organised by Museum of Contemporary Art Chicago curator Carla Acevedo-Yates. At Sean Kelly Gallery’s stand in that section there are three nearly-seven-foot-tall works by Hugo McCloud that almost perfectly summarise the interlacing of the Latin American and Black art that was on view. Each depicts a man, presumably older but you cannot see his face, rides a rickety bicycle to which a large shallow crate has been attached—he is delivering flowers. The $200,000 works speak to the value of labour and the stark difference in social economics. More importantly, there’s an environmental aspect to the work. McCloud collects single-use plastic bags that would otherwise end up in landfills then adheres them to the canvas through a heat transfer process. This creates a delicate texture to the works that only enhances their message.

McCloud is not the only artist at the fair to turn plastic bags from nuisance to medium. Instituto de Vision is showing a work by the artist Aurora Pellizzi. In one work, priced at $16,000, the artist also used this type of single-use plastic bag to create an elegant abstraction that almost looks like it was made out of a new breed of flower. For years, Pellizzi collected the bags, cleaned them and organised them by colour before weaving them together to create the resulting picture.

Like unusual choices of medium, some themes reached across different stands in the Focus section to somehow form a unified idea. A few of the section’s exceptional stands are entirely devoted to, or feature works that were made in the 1990s. In London-based Cecilia Brunson Projects’ stand, two works by the artist Katie van Scherpenberg that were made during that decade not only continue a textural trend that was present throughout the section but also kicked off an interesting trip three decades into the past. Van Scherpenberg, while born in São Paoulo, Brazil, lived for years with her parents on a small island in the Amazon purchased by her father. When her mother decided enough was enough, she left Van Scherpenberg and her father, but not before gifting the artist with her trousseau bed linen. Twenty years later, the artist used the linen in the works on view, attaching them to the canvas and colouring them with bronze and copper oxides that, overtime, have begun to turn a pallid green. Beneath the metallic-looking surface, the embroidered bed linens can be seen, slowly being enveloped by oxidizing colour. Two of Van Scherpenberg’s works on the stand had been sold by early afternoon during the VIP preview on 8 September (the gallery declined to disclose prices).

Texan gallery Ruiz-Healy Art’s stand is dedicated to work by the Mexican-American artist Chuck Ramirez and is an exact replica of a show put on in the artist’s hometown of San Antonio, Texas in 1999. After Ramirez was diagnosed with Aids in 1993, he quit his day job working as an art director and devoted his life to creating art. The most poignant works here are two large-scale photos depicting his daily “cocktail”, the drugs he took to keep the condition at bay. In each daily compartment in the plastic pillbox, the shadow of expensive, hard-to-get and lifesaving drugs is a reminder that just this week a conservative judge in Texas ruled that drugs that prevent HIV infection can no longer be given out for free as part of the Affordable Care Act because they “could infringe upon the rights of employers under a law called the Religious Freedom Restoration Act”, according to a Reuters report.

Of course, it would not be be a New York fair if the odd celebrity was not seen lurking around the aisles. Paul Rudd, Jared Leto and Anderson Cooper were among the visitors during the VIP preview. Even more salacious than the obligatory celeb-stalking were rumours and whispers circulating during the VIP day and well into the myriad parties that traditionally follow and the gallery openings that come with it, including the question: where were the mega-galleries Hauser & Wirth, Gagosian and Pace? Surely it was not their absence, however that caused several collectors to mention an overwhelming sameness in most of the core section’s booths. In gaggles surrounding the Pommery Champagne bar, and in the VIP lounge, there was often more squawking about the how lovely Javits Center looked than the art inside.