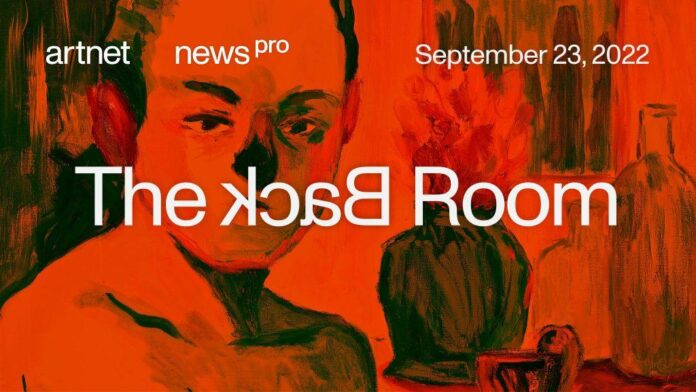 This week in the Back Room: auction houses shake up the primary market, which countries’ gavels ruled August, your favorite roundup of cross-sector news morsels, and much more—all in a 7-minute read (1,877 words). 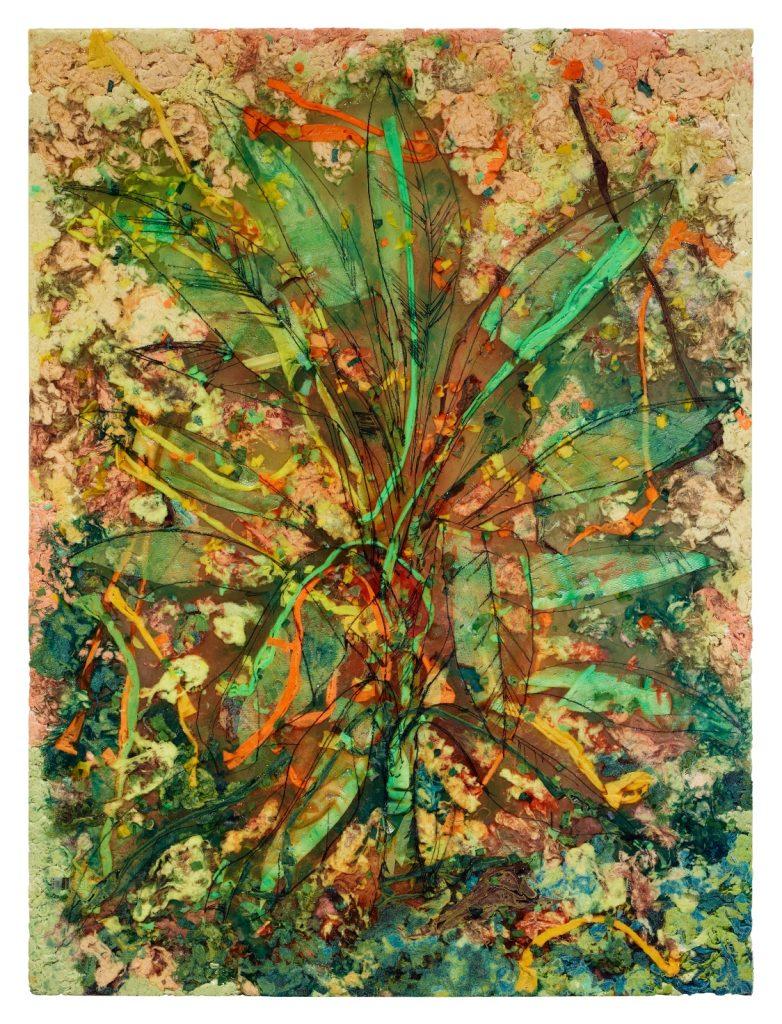 Kevin Beasley, The Red Banana Tree (Forstall) (2022) is one of the inaugural works included in the Artist’s Choice initiative at the Contemporary Curated sale at Sotheby’s New York on September 30.

Remember the good old days, when auctions were strictly a resale channel?

While that memory is more nostalgic than many observers want to admit (especially if you consider NFTs), the past month has seen three separate Western auctioneers move to put primary-market works under the hammer: Sotheby’s, Christie’s, and Simon de Pury’s namesake online platform.

All three have caused agita among industry insiders, particularly gallerists who already felt under siege from bigger beasts in their own sector. But a pre-existing Korean auction series and an overlooked bottleneck make this trio seem far less diabolical than the prevailing narrative.

For brevity, let’s start by unpacking only the most talked-about of the three Western initiatives, Sotheby’s Artist’s Choice. (You can read about de Pury’s first-to-market sale here, and Christie’s variation here)…

The Brief: Masterminded by Noah Horowitz, Sotheby’s worldwide head of gallery and private-dealer services, the ongoing sales channel invites a small number of artists and their respective dealers to jointly offer new work at auction. The initiative will launch as a part of the house’s “Contemporary Curated” sale in New York on September 30. (More details here.)

The Pitch: “The win-win ethos at its core empowers artists and galleries to lean into auction by selecting the right work at the right time on their own terms,” said Horowitz. So the artists are “actively involved with how their work will be represented at auction, rather than responding to these dynamics reactively as is usually the case.”

The Split of Proceeds: 92.5 percent of the hammer price to each pairing of artist and gallery; 7.5 percent to a cause or charitable organization designated by the artist; and a 7.5 percent match by Sotheby’s from out of the buyer’s premium.

Critics Say: Very few artists actually stoke enough demand at auction to win themselves and their dealers a career-changing windfall. Even if that low-probability outcome hits, Sotheby’s is making the primary market even more baldly transactional while normalizing auction houses’ presence in the business of selling work fresh from the studio.

However, the criticism feels overcooked once you compare Artist’s Choice to a Korean auction initiative called…

The Brief: Launched in November 2019, Zero Base is a dedicated sale series in which Seoul Auction sources work directly from Korean artists—most without gallery representation—and offers much of it at a starting bid of zero South Korean won (KRW), with no reserve price.

The Pitch: A Seoul Auction spokesperson said that Korean galleries “frequently come to recognize certain artists through Zero Base and subsequently work with them.” Others allegedly catapult from anonymity to healthy resale markets. Some supposedly do both.

The Split of Proceeds: Zero Base declined to confirm how proceeds are divided, saying only that “a range of plans” is used.

The Artists: To date, there have been nearly 30 Zero Base auctions featuring works by more than 140 Korean artists. The house also operates partnerships with cultural foundations in three provinces to identify and bring more local talent to market.

One success story is Qwaya, a former illustrator and K-Pop album-cover designer whose paintings have risen in price by 24X since his first Zero Base work sold for KRW250,000 ($179) in December 2019. This summer, a 2021 Qwaya canvas went for KRW 6.2 million ($4,446) on Blacklot, Seoul Auction’s e-commerce resale platform.

Critics Say: A spokesperson for the Galleries Association of Korea called the Zero Base sales “reckless auctions for one-off profits” that “threaten the time for young artists to receive proper evaluation and grow,” citing “cases where artists are thrown into the market without time to solidify themselves.”

Ironically, those words sound almost identical in substance to what we have heard from some dealers about Artist’s Choice, even though Zero Base rams auctioneers much deeper into the primary market much earlier in artists’ careers.

“As demand for contemporary art has continued to escalate, a wedge between primary and secondary market prices for the most sought after artists has opened up,” Horowitz said.

Tim here: During my years in the gallery sector, I cannot tell you how many times a collector with a baseline level of competency responded to work by a midcareer or overlooked veteran with some variation of, “Why would I buy this new painting at $40,000 when the artist only has four auction results since 2002, and none of them is for more than $18,000?”

What buyers often don’t know (or don’t care about) is that the auction data hides vital nuances like the condition of the earlier lots, how they fit (or don’t) with the artist’s current practice, the caliber of the auction house offering them, and the market timing of the sale—all of which can warp expectations and kill future sales even years into the future.

This is the unadvertised downside of dealers tightly managing their artists’ resale markets: most buyers would rather walk away than pay a primary price higher than what the auction data says they should.

Artist’s Choice may not be a perfect solution to this problem, but at least it aligns the incentives of the auction house, the gallery, and the artist—and gives the latter two an unprecedented degree of control of what goes under the gavel.

Will it work? Either way, it will be a fascinating trial to watch. If you thought Artist’s Choice went too far, though, Zero Base is proof that, as more and more of the old boundaries fade away from the art market, someone else will always be willing to go even further. 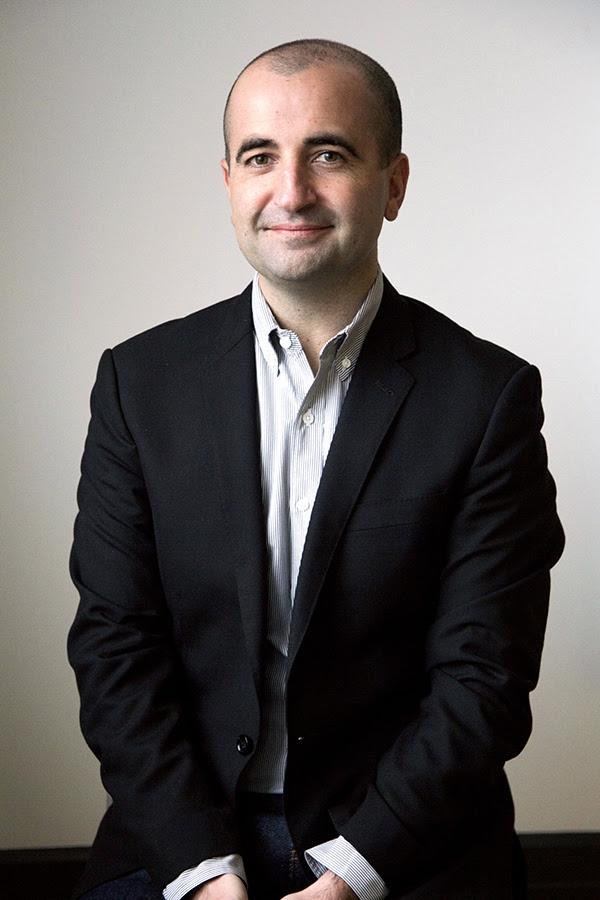 Our trusty gossip-hound Annie Armstrong is on vacation this week, so Wet Paint is too.

In the meantime, here’s what made a mark around the industry since last Friday morning…

“Pinch me—I must be dreaming. Brad Pitt is an extremely impressive artist. I certainly didn’t expect to be saying that when I got up this morning. He has sidestepped the embarrassment of celebrity art to reveal what by any standard are powerful, worthwhile works.” 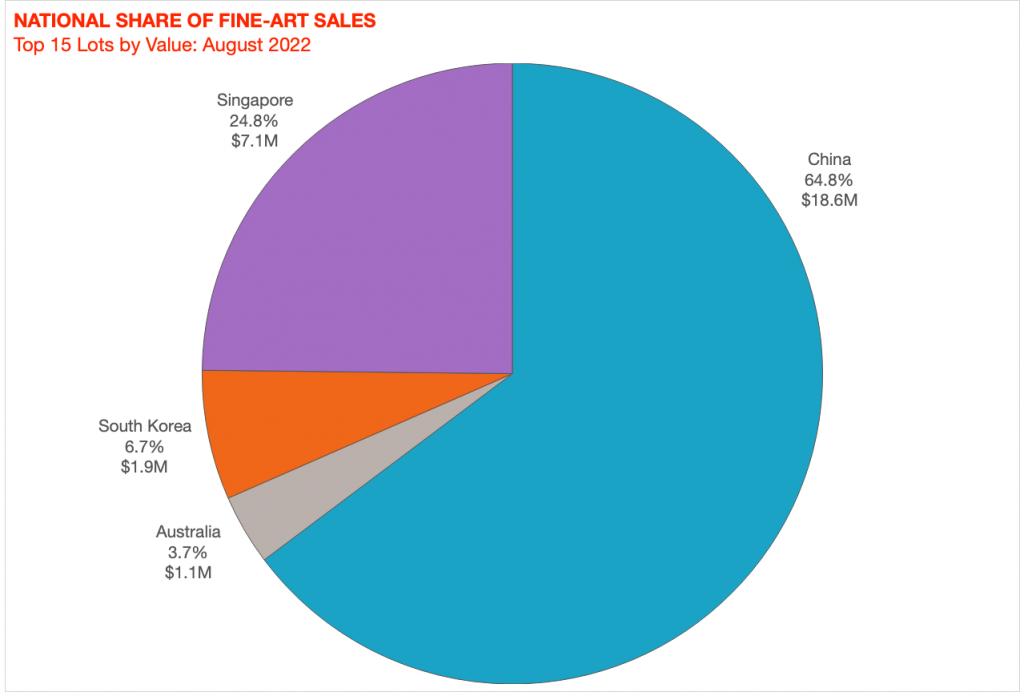 If you need analytical proof that big-ticket auctions are now a year-round business, the chart above breaks out which countries’ auction houses played host to the 15 highest-value fine-art sales in August. The cohort collectively brought in almost $28.8 million—and a few storylines worth watching…

For an illustrated piece-by-piece accounting of the works behind these juicy numbers, click through below.

What We Hold in Common: Making Meaning by Collecting Objects and Narratives of the Present, the Earth, and the Deep Past

‘It’s a Huge Message to the Centuries-Old Art Market’: 18-Year-Old NFT Star Diana Sinclair on How She’s Taking on the Blue-Chip Art World

How Artists use Their .art Domain to Launch NFTs

Spotlight: Bettina Pousttchi’s Installation at a German Sculpture Park Blurs the Line Between Photography and Architecture