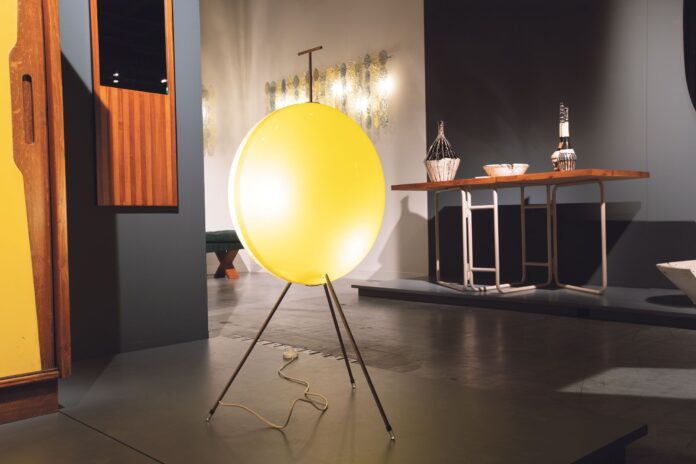 Sofa looking a little worn out after lockdown? A little too familiar with the current interiors in your home? Perhaps now might be the time to invest in design rather than art. Design Miami/Basel, on the opposite side of the Messeplatz to Art Basel, is showing selected works from 34 of the world’s leading design galleries, as well as 18 curated exhibitions collectively titled Curios. Designers have purposefully kept back their most prized acquisitions for this edition of the fair, meaning that the quality on show this year is higher than any in recent memory—from the most sublime examples of mid-century Modernism through to the most audacious examples of contemporary design. Roger Federer could be seen wandering through the VIP event; we advise you to follow in his footsteps.

Surrounded by more ostentatious pieces, the circular floor lamp, emitting a soft yellow light, is perhaps easy to pass by. But the Moon Lamp is the subject of serious interest from those tasked with acquiring pieces for the world’s most prestigious design museums. The lamp, by the Italian designer and architect Gio Ponti, is a prototype made in 1957 for the Milan Triennale, which celebrates its centenary next year. Ponti originally created it to exist in dialogue with the wardrobe of the Italian architect Ignazio Gardella’s Villa Coggi in Milan.

Few galleries have curated their space as carefully as Morentz. The Dutch gallery’s stand is like a cocoon of the most tasteful mid-century design. The gallery’s founder, Richard Kuipers, has juxtaposed works by European, American and Brazilian designers including Hans J. Wegner, Paul Evans and Osvaldo Borsani. In the centre stands a fireplace made in 1959 by Italian design collective BBPR. This is one of the only times such a thing has been on sale at an iteration of Design Miami/Basel. It is an audacious inclusion—an art-infused caging of a destructive element.

Last year, New York gallery Friedman Benda brought Misha Kahn’s ‘snail chair’ to Basel, where he won a prize for the best contemporary work of the show. Now the gallery has dedicated an entire booth to the designer’s work. “It’s a huge thing for me,” Kahn says. The 33-year-old designer works in the legacy of Creative Salvage, the 1980s punk movement, and uses industrial materials found near his studio in New York as inspiration. Gallerist Marc Benda describes Kahn’s work as “fluid”. “He’s happy to work between noble materials and someone else’s trash,” he says. “He doesn’t make a distinction between the two.” Wall hooks resembling a cartoon devil’s forked tongue are made from orthopaedic gel, while a shelving unit is made from molten glass poured on to sand. “I think it’s interesting that people still feel beholden to the language of Modernism,” Kahn says. “We’re now living through the failures of industrialised culture. That’s what I’m interested in.”

Few people have influenced contemporary collectable culture more than Virgil Abloh, the former artistic director of Louis Vuitton’s menswear collection, who died in 2021 at the age of 41. Abloh was a polymath, working across fashion, design, architecture, engineering, music and art. In January 2020, Galerie Kreo displayed Efflorescence, the first exhibition in a gallery dedicated to Abloh’s contemporary design. A chair crafted from concrete and street art from that exhibition is on show in Basel. He would have appreciated his fellow Galerie Kreo exhibitors this year—designers of the calibre of Marc Newson, Guillaume Bardet, Edward Barber and Jay Osgerby.

Floating in the midst of Design Miami/Basel is the Podium exhibition organised by the fair’s curatorial director, Maria Cristina Didero. The works here were created with the war in Ukraine in mind; each piece was selected to be nostalgic, remembering a better time. In the centre is what at first seems like an unassuming grey basin, utilitarian in appearance, but this is Pierre Paulin’s Water Lillies Bowl from 1955, brought to the fair by Pascal Cuisinier. It is one of the rarest pieces from Paulin’s work in this period, and one of just three ever produced. It is both beautiful and poignant—lilies, of course, are the flower of death. Close by is a calming lamp comprised of blue and yellow neon, the colours of Ukraine, by Marie Piselli. Paulin’s bowl is priced at €50,000, and Piselli’s lamp is $6,900.

Inside playful curved glass vases created in Murano, Venice, are bright, bubblegum colours, like jars of candy. But this is in fact sustainable design. The contents of the vases are micro-plastics, the pollutants that exist in the water we drink. They have been brought to Basel by Particle gallery, which has branches in Milan and Singapore, and were created by the Italian and Singaporean design duo Francesca Lanzavecchia and Hunn Wai, who scavenge the plastics from the environment. “Plastic is in the water we drink every day,” says Bruno Bolfo, the founder of Particle. “We consume five grams of plastic a week through water; it’s the equivalent of a credit card. We want to start conversations about this.”

5 Must-See Art Shows Around the World