Home News Anna Delvey, Out of Jail but Still Under House Arrest, Pulled in... 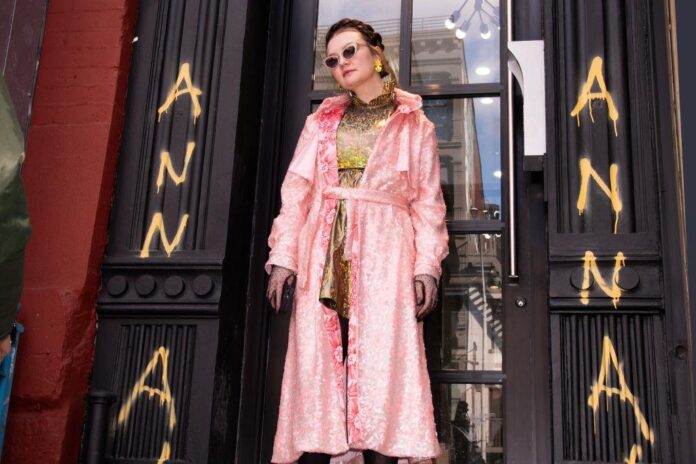 In the hours after the published an update on convicted scammer-turned-artist Anna Delvey’s art career—including that her editioned prints and original artworks with various galleries have pulled in more than $340,000 this year alone—there was another surge of interest, including visits to the web page and inquiries to the gallery.

Delvey, who was released from an Immigration and Custom Enforcement (ICE) jail in October, must wear an ankle monitor bracelet while she remains under house arrest at the Lower East Side Manhattan apartment she rented after her conditional release. In an unusual twist, a condition of her release bans her from using social media.

None of that has stopped her art career from thriving. In fact, it started while she was still in jail, relying on materials furnished to her by dealer Christopher Martine of Founders Art Club in New York. In May, a show titled “Allegedly” was held at the Public hotel in downtown New York. 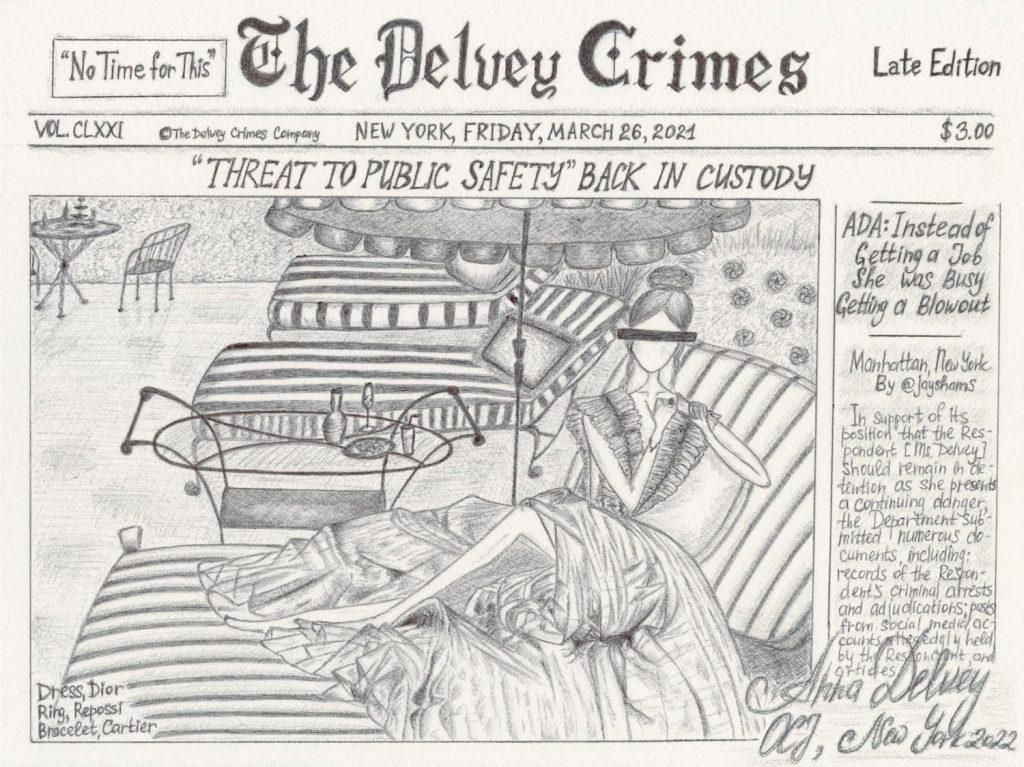 In total, 11 originals, from the 27 works she created in prison, have been released on the Founders site. Three have been sold to date, while eight are still available, Martine told Artnet News. Prices for the original pieces range from $17,000 to about $25,000.

And how does Delvey herself view her newfound calling as an artist? “I am happy to see my pieces get so much attention, and deeply grateful to have the opportunity to tell my side of the story through my art,” she told Artnet New via email. “I try not to take myself too seriously, all my work is laced with irony. I’m hoping to turn all the media attention towards something positive and productive.”

For the prints, the pricing starts at $250 and the structure is such that every time 50 works sell out, the price goes up another $50, so hat “people who get in early get the best value,” according to the gallery, particularly on the ones that have proved most popular.  One such work was a play on the wildly popular Delvey-themed Netflix series, “Inventing Anna,” as seen on a Saturday Night Live skit.

In the comedy sketch Delvey, portrayed by comedian Chloe Fineman, demands that a hapless retail worker “Run It Again!” when attempting to pay with a supposed credit card that turns out to be a useless shoppers club card. Fineman herself reportedly owns one of Delvey’s works and was gifted another.

“Right now we are working through the art that she completed while she was in prison,” Martine said of the agreement the gallery has with Delvey, whose real last name is Sorokin. “We’re also working with her on a new series, letting her explore now that she has much more freedom as far as material and how she wants to advance her style.” Martine said there will ultimately be another collection for sale and the gallery plan to continue working with Delvey in 2023.

Delvey also produced a series of original pieces this fall, for the downtown art space The Locker Room, which is run by Samara Bliss. 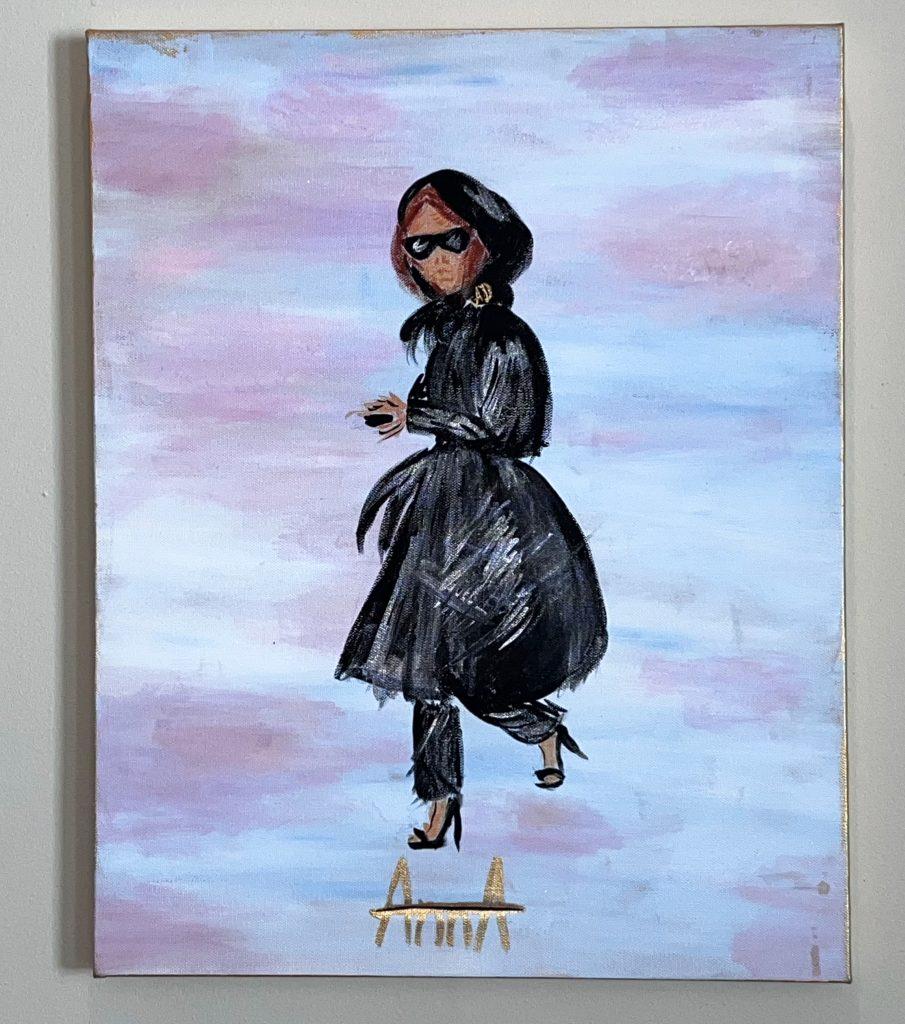 Anna Delvey, Prowling in Prada (2022). Courtesy of the Locker Room.

“We’ve been thrilled about the interest in Anna’s ‘House (Arrest) Collection’ which has come from experienced art collectors and novices alike,” Bliss told Artnet News. “Anna and I have been really enjoying building relationships with the past and potential buyers who are all engaged in her story and her art practice. It’s a fun group of people that we’re excited to see grow with her career overtime.”

According to the , one work titled , showing Delvey decked out in all black with high heels and a scarf on her head, along with signature oversized black sunglasses, sold to a San Francisco-based tech entrepreneur, Casey Grooms, for $15,000. 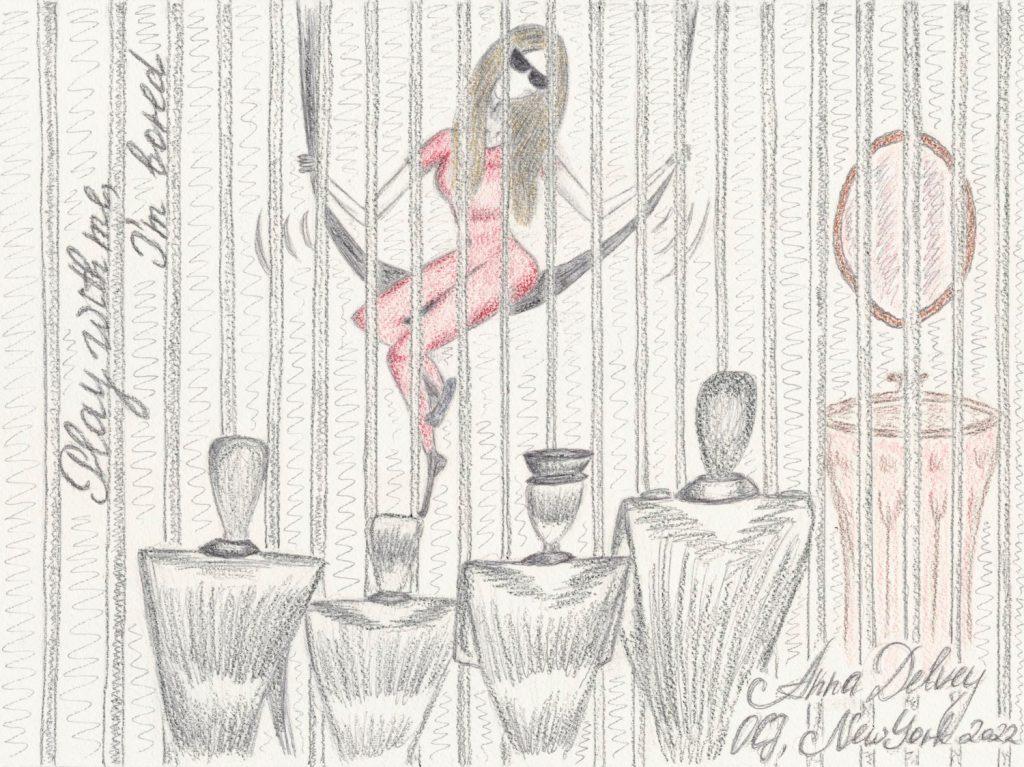 “It’s the idea, specifically, of buying into the idea of Anna and her life story. It was kind of like a ticket to advance myself a lot quicker in this space,” Grooms told the .

Artnet News asked Martine who Delvey’s buyers are and what he thinks is resonating with them. “It’s very interesting, the legal community is a huge supporter,” he says with several works being sold to lawyers or to hang in law offices. It has also drawn entrepreneurs in the business world “who know the struggle of how hard it is to actually push through,” he said. Further, he cited interest and acquisitions from people ranging from “founders of nine-figure tech companies, and even past presidents of different countries. It’s an interesting dynamic.”

Some collectors have become more familiar with her story because of the Netflix series. “People know the story line and how her intention was not to create a Ponzi scheme or a scam or anything like that,” Martine said. “It was to create a real foundation and club, she obviously made missteps in trying to fundraise, but if she had actually gotten that loan, she was going to create something that could have been very successful.”

Though an assembled jury and judge who sent Delvey to prison for years would likely disagree with that portrayal, Martine says that Delvey shrugs off any negativity that comes her way and keeps persevering. He conceded that a social media ban put in place by the judge who granted the most recent release has hampered the ability to reach her legions of adoring fans, so he has had to find alternate ways to promote and market the artwork.

The looked at one of the online platforms Delvey was on, known as “Passes,” which is described as an online startup where users pay for glimpses into the lives of influencers.

Delvey’s platform has various content tiers, such as a $549 package called the “Delvey Danger Zone” that offers a 15-minute call with her, as well as a “Delvey Download” for $259, with a one-minute “personalized” video.

The noted that following publication of its story, a representative for Delvey said “Although Passes is not social media as contemplated by Ms. Sorokin’s release conditions, in an abundance of caution, she has deleted her profile and closed her account. Ms. Sorokin’s profile no longer exists on the platform.”

But is Delvey talented when it comes to artistic skill? Is she the real deal? Martine says there has been no shortage of doubters who ask those questions.

“There is something to be said that this is her first foray into the art world and she’s been able to sell more than $300,000 worth of prints and originals in a half-year span,” the art dealer noted. “In my opinion, its extremely impressive.”