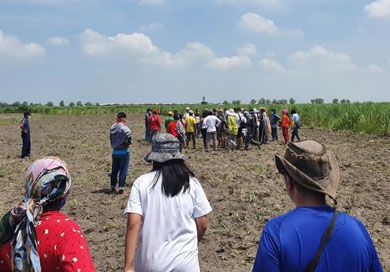 Around 45 artists were arrested in the town of Concepcion in Tarlac Province, Philippines, last week after joining local farmers and peasants undertaking land cultivating activity in the area.

More than 90 individuals were initially arrested without warrants and detained by local police on 9 June, with 83 people held in jail until 12 June, after activists were able to raise money for their bail.

The multimedia artist Cian Dayrit—whose work has been shown in biennials including Berlin, Sydney and Gwangju—spent three nights in detention. His work has long centered on agrarian justice in the Philippines, with cartographic tapestries that map out geographic areas and issues of peasant and Indigenous rights, as well as environmental destruction.

He is also a founding member of SAKA (Sama-samang Artista para sa Kilusang Agraryo), an alliance of arts and culture workers that support land justice and food security in the country.

On 9 June, SAKA members joined cultural workers and farmers in conducting bungkalan or cultivation work on the lands of Hacienda Tinang. Such tilling and cultivation activities are a way for farmers to assert their rights to plots of land that were granted to them as part of the Comprehensive Agrarian Reform Programme (CARP) in the 1980s and 1990s.

Known as Agrarian Reform Beneficiaries, or ARBs, the farmers and sugar workers in Concepcion have been petitioning the government for official installation on their land since 2018, but their legal efforts are being impeded by the previous landowner, who is now the town’s mayor.

Recounting the events to The Art Newspaper, Dayrit says: “the police had rounded us up and threatened us. We were all brought to the station and detained long before there was any idea on what basis we were being held.”

The ARBs and artists were then held in the parking lot of the police station and were heavily guarded. “We were kept mostly outside, exposed to the elements. A large number of us were forced into the small jail cell on the last night until the release,” Dayrit says.

According to SAKA, as many as 64 individuals were locked in one cell, measuring around 3m by 6m, and endured extreme heat and poor ventilation, with some incidences of people fainting. “We were not provided food or medical care,” Dayrit adds.

Through calls for donations on social media, SAKA was able to pay the collective PHP1.2m ($22,400) bail for all 83 individuals. Despite their release, the artists, ARBs, and even a number of local journalists, have been charged with illegal assembly and malicious mischief, and will have to face court hearings in the coming weeks.

The Commission on Human Rights in the Philippines has also initiated an investigation into the arrests, as well as the inhumane conditions under which the individuals were held. At the same time, farmers are also pushing forward with their case to reclaim their lands. SAKA and other groups are continuing to raise funds for future legal proceedings, with Dayrit carrying on with his activism. “As an artist, it is important for me to take part in these activities because these are the very narratives that my work aims to amplify,” he says.