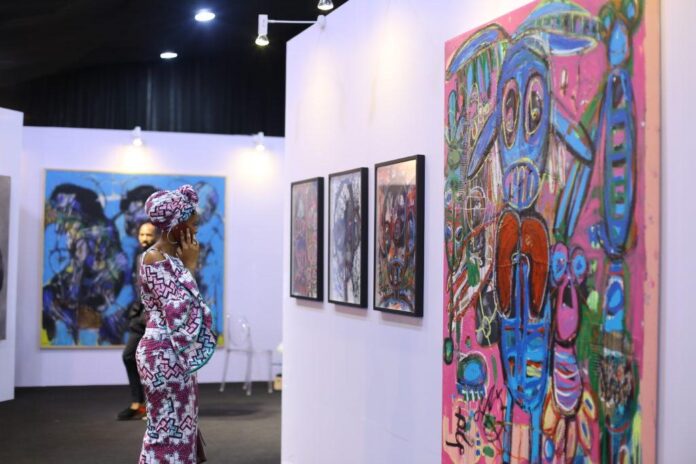 The seventh edition of Art X Lagos wrapped up on Sunday, and while the atmosphere was overwhelmingly described as lively, in terms of sales, it appears to have been a mixed bag.

The steady but considerable growth of the market for West African art over the past five years is reflected in the fair’s increased presence internationally since 2016, but those who participated this year are unlikely to have done so without some trepidation.

Nigeria is just one of many countries being hit hard by the global economic downturn, with its currency plummeting and inflation high. The forthcoming national election in February, along with serious floods, are also creating turbulence.

Despite this foreboding backdrop, most galleries Artnet News spoke with at the fair—the biggest so far with 31 exhibitors—maintained a generally breezy attitude.

There is often a notable delay between the onset of a recession and its impact on the art market, although this is less true of the mid-price range typical of Art X Lagos. The fair may be sustained, however, by the compelling sense of a fresh and promising future that the location represents for its dedicated community of dealers and collectors who have so far chosen to invest.

As a period of bold speculation comes to an end, will a stable market remain?

Maria Varnava, founder of Tiwani Contemporary, is so confident in the region that she opened a new gallery branch in Lagos this year. It came, she said, with “the thinking that many of us are part of a community making a clear long-term commitment and investment in the future of the African art scene and the cities that help to make them.”

Duly, she reported an energetic mood at the fair, and the sale of works by Virginia Chihota ($45,000), Michaela Yearwood-Dan ($55,000-$65,000), Miranda Forrester, Emma Prempeh, and Portia Zvavahera. Aside from locals, she noted significant interest from collectors based in Ghana.

Daudi Karungi, the founding director of Afriart Gallery in Kampala, Uganda, since 2002, was also pleased to announce the sale of several works by the Tanzanian painter Sungi Mlengeya to Nigerian collectors for sums in the region of $55,000 to $75,000.

Olugbemiro Arinoso, of Affinity Gallery in Lagos, speculated that “the recent economic downturn has not had much of a negative impact on the market because the collectors see the advantage of art as an alternative form of asset.”

He noted that the market is buoyed by investors with a long-term mindset and “the rise of young collectors who are collecting for cultural value and preservation.”

Florian Azzopardi, who founded Afikaris Gallery in Paris in 2018 to promote emerging African artists, sees the fair as a crucial opportunity to present artworks on the continent.

“It was a nice occasion to consolidate our links with the two artists from Lagos that we are representing,” he said.

“I could really feel that the fair was an important cultural event in the city but also a social event,” he aded of the glamorous buzz now associated with Art X Lagos. “It was sometimes a bit too much, and we had the feeling of attending a fashion show at our booth, transformed into a photo booth for TikTok or Instagram!”

Despite this, Azzopardi felt there was not enough opportunity to meet new collectors when stacked against the cost, time and effort of exhibiting internationally.

“I was told by other galleries that there were fewer collectors than other years and a more limited number of ‘good contacts’ made,” he said. “I believe the [economic] context is not helping.”

“I believe it was not an easy edition for most of the galleries,” Azzopardi concluded.

His experience appears to have been echoed by Okinkansola Dada of DADA gallery, which exhibits in London and Lagos. Though they did not finalize any sales, “we got some great public reactions to the colorful large scale paintings and sculptures by our Nigerian-based artist Samson Bakare.”