Home News The Man Accused of Attempting to Steal a Banksy Mural in Ukraine... 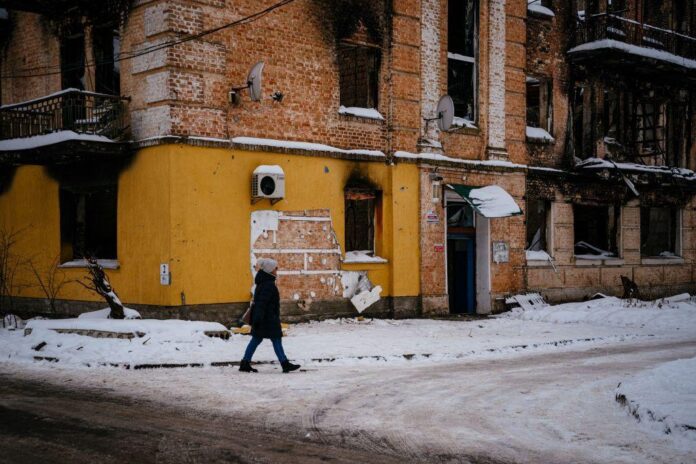 The accused mastermind behind the theft of a Banksy mural painted on a battle-scarred building in the Ukrainian down of Hostomel, near Kyiv, could spend up to 12 years in prison if convicted of the crime.

The potential sentence was announced on the website of the nation’s interior ministry on Monday, according to Reuters.

The artwork, one of seven guerrilla street murals the anonymous British artist painted on Ukraine’s war-torn streets in November protesting the Russian invasion, is a stenciled depiction of a woman with curlers in her hair, wearing a gas mask. It was painted on the shell of a bombed-out building near Antonov Airport, and officially recognized as a piece of cultural heritage by the Gostomel settlement military administration.

The artwork’s value is estimated at over 9 million hryvnia ($243,900), according to a Facebook statement by Kyiv police. (Banksy’s auction record, according to the Artnet Price Database, currently stands at $25.4 million, for the 2021 sale of , which infamously shredded itself at a 2018 sale).

The attempted robbery took place in December, with the culprit allegedly receiving assistance from people who believed he had permits to transport it. The culprit successfully removed the artwork from the brick wall, but authorities recovered it as the thieves attempted to load it into a car. The painting is currently in police custody.

“The criminals tried to transport this graffiti with the help of wooden boards and polyethylene,” Ukraine’s office of the prosecutor general said in a statement. “Thanks to the concern of citizens, the police and other security forces managed to arrest the criminals.”

Serhiy Dovhyi, one of the people arrested, countered that he removed the artwork as an act of activism, planning to auction it to benefit the Ukrainian Army.

Banksy collaborated with the Legacy of War Foundation to put up work across the country, traveling in an ambulance provided by the charity. It doubled as an escape vehicle when “an angry babushka found me painting on her building and called the police,” the artist wrote in December.

Banksy announced the release of 50 limited-edition prints featuring his signature rat to benefit the organization, which supports Ukrainians in need. More than a million people reportedly applied to buy one of the works, each priced at £5,000 ($6,100), on the Legacy of War Foundation website, which was also subject to “3,500 hostile attacks from Russian IP addresses,” it noted.

Banksy has made it clear that he disapproves of those who seek to profit from his street art by removing pieces from public view and selling them.

Last year, eight men were convicted of stealing the artist’s tribute to the deadly 2015 shooting at Paris’s Bataclan theater. The highest sentence was four years behind bars, plus two years probation.

As with the Bataclan case, the symbolic significance of the stolen Ukrainian artwork has colored public perception of the crime.

“These images are, after all, symbols of our struggle against the enemy,” Oleksiy Kuleba, Kyiv’s governor, told the BBC. “These are stories about the support and solidarity of the entire civilized world with Ukraine.”

An Art Teacher Stashed Some Drawings by Famed Artist L.S. Lowry in a Cupboard Years Ago. Now They Could Fetch $60,000 at Auction

The Orange County Museum Opens Its New Home, With a Focus on Celebrating Women Past and Present