Home News The World’s Oldest Map of the Stars, Lost for Thousands of Years,... 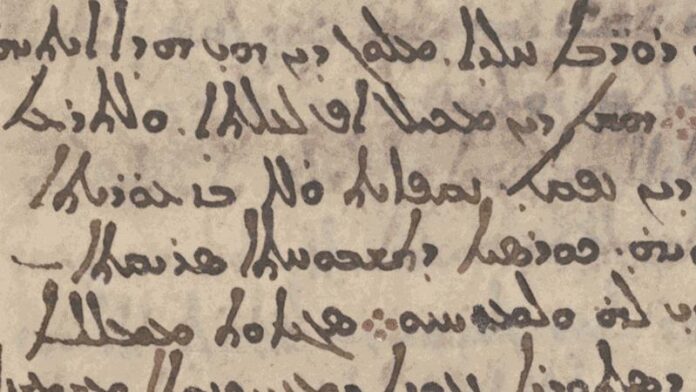 Scholars have discovered part of the ancient Greek astronomer Hipparchus’s long-lost star catalogue of the—believed to be the first map of the stars—in a manuscript from a Greek Orthodox monastery in Egypt.

The historic document, which comprises 146 folios, comes from St. Catherine’s in the Sinai Peninsula of Egypt, and the majority is now in the collection of the Museum of the Bible in Washington, D.C.

A new study published this week in the reveals that it is palimpsest manuscript, in which the original ink had been scraped off to reuse the parchment for a new project—and that traces of the original writings can still be deciphered, revealing what appears to be a reference to Hipparchus’s ambitious project to map the stars, including star coordinates.

Astronomy historian James Evans told the journal that it was a “rare” and “remarkable” find.

The relevant part of the manuscript is the , a collection of writings in Syriac, an ancient dialect of Aramaic that features in many early Christian texts. The existence of earlier Greek writing on the parchment was first discovered in 2012 by a student named Jamie Klair, who was examining it as part of a summer assignment for biblical scholar Peter Williams at the University of Cambridge.

In 2017, researchers at the Early Manuscripts Electronic Library in Rolling Hills Estates, California, and the University of Rochester in New York examined the pages using multispectral imaging, taking 42 photos of each folio in a variety of light wavelengths.

Using computer algorithms to determine what combination of images would best reveal the underlying text, the team found astronomical materials on nine folios, including Eratosthenes’s star-origin myths and the third-century poem Phaenomena, about the constellations.

But the most significant discovery was almost overlooked, until Williams realized there were a set of star coordinates on the images. He turned the passage over to Victor Gysembergh of the French National Scientific Research Centre and Emmanuel Zingg of the Sorbonne University, who confirmed what he was seeing.

The page-long passage gives measurements in degrees for the constellation Corona Borealis, with coordinates for the stars on all four edges. Such observations shift over time as the Earth wobbles on its axis in a phenomenon known as procession, which means it’s possible to determine when these observations would have ben made—in roughly 129 BCE.

That’s not far off from when Hipparchus was believed to have been conducting his work, between 190 and 120 BCE. Because telescopes were not yet invented, he would have used less useful surveying tools such as a sighting tube or a model of objects in the sky called an armillary sphere or spherical astrolabe.

The long-lost text seems to confirm the written historical sources from ancient times that name Hipparchus as the first person to measure the stars. (He is also credited with discovering procession.) And experts also believe that similarly worded star coordinates in the , a medieval Latin manuscript, are also probably from Hipparchus.

“The new fragment makes this much, much clearer,” astronomy historian Mathieu Ossendrijver, of the Free University of Berlin, told . “This star catalogue that has been hovering in the literature as an almost hypothetical thing has become very concrete.”

Previously, antiquity’s only known surviving star catalogue came from Claudius Ptolemy of Egypt, who worked in the second century C.E. Early studies suggest that Hipparchus was actually more accurate in his observations that the later astronomer.

“Two years ago, I would never have hoped to witness such a discovery within my lifetime, let alone be a part of it,” Gysembergh told . “This makes me optimistic that more passages from the catalogue will be recovered in the future.… there are thousands of palimpsests and damaged manuscripts around the world that would benefit from multispectral imaging.”