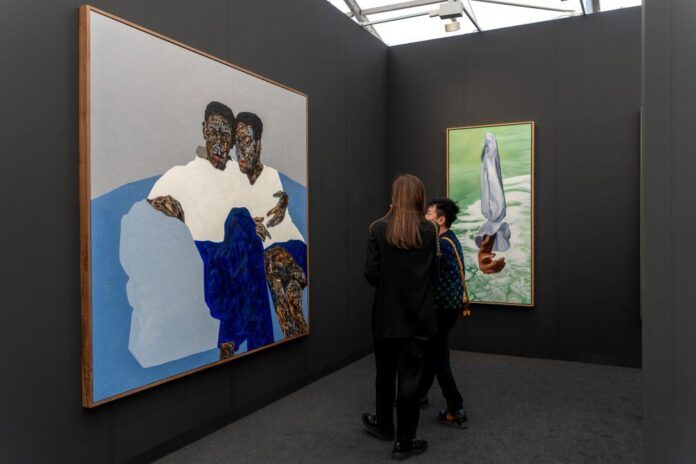 A brand new art fair is like a first date.

There are buzzing nerves and a lot of questions. What’s the vibe going to be? Will you feel mutual attraction? What are you going to say when your friends ask you what you thought?

This anticipatory energy imbued Paris+, Art Basel’s new art fair in Paris, which opened to VIPs on Wednesday and opens to the public today. Although it was held during the same dates and at the same location as the French fixture FIAC, Swiss-owned Art Basel brings its own brand of sophistication, swankiness, and style. (In other words, you’ve gone on a date to this restaurant before—but not with this person.)

I spent around five hours shuffling through the Grand Palais Éphémère—the fair’s temporary home until 2025, when the Grand Palais reopens after construction—to find the most memorable booths.

Of course, the selection process is an inexact science. My strategy is to begin by walking through the entire fair, which is shaped like a cross: the blue-chip, more Modern material is located along the two horizontal arms and increasingly contemporary fare is up and down down the middle. Then, after staring into space for a while, I note which booths remain on my mind after all that sensory overload, and visit them again. Here are the ones I think are worth a closer look and offer a sense of the range of art on display. 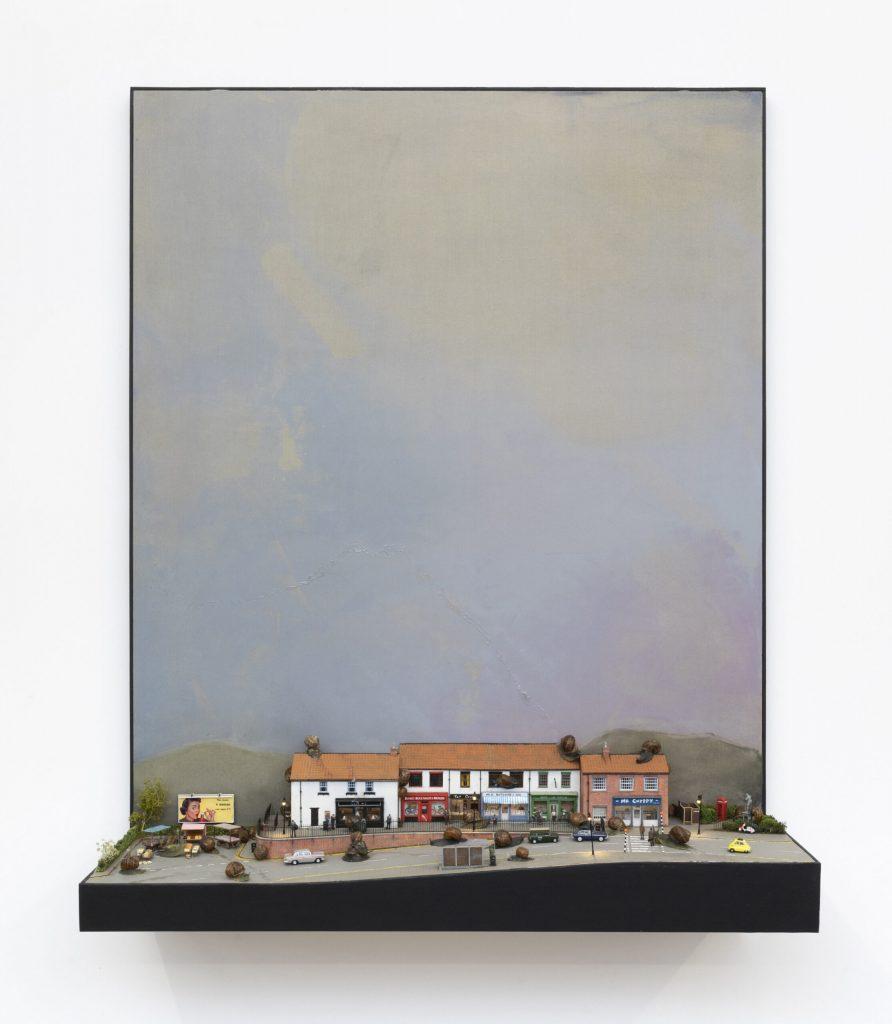 In the British artist Patrick Goddard’s wry, absorbing film, a talking dog named Whoopsie holes up in his garage and builds a model train set after going through a divorce. Over the course of the 20-minute video, Whoopsie pushes away everyone who stops by (including a trio of Trick-or-Treaters who, rudely, don’t even sit when asking for a treat) as his home becomes infested with snails and bugs.

The video—which is accompanied by wall-mounted works that present segments of the model train set—is, according to Goddard, a send-up of the kind of xenophobia and racism that led to Brexit. (The video is priced at €17,000 and the wall works are €10,000 each.) As good contemporary art often does, it draws you in by being funny and enchanting and weird, and then implicates you. Situated in the emerging galleries section, it is also one of the rare booths to incorporate video at the fair.

I wasn’t the only one charmed: Mega-collectors Mera and Don Rubell came by and bought out Seventeen gallery’s entire booth on opening day. 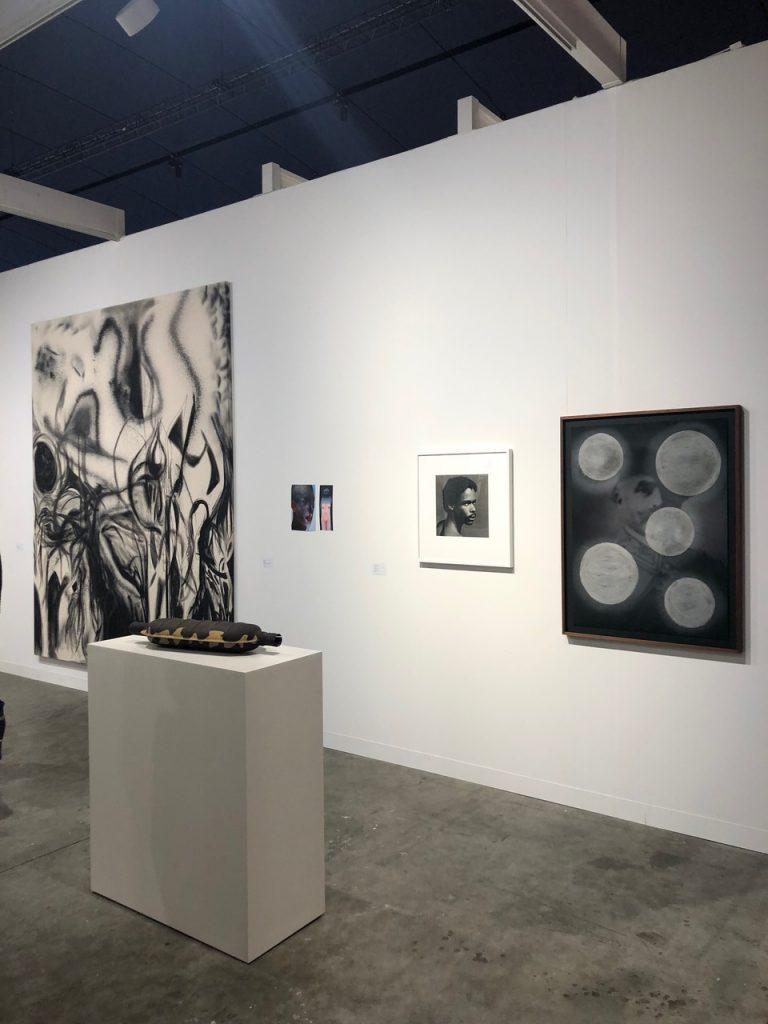 A view of Meyer Riegger and Franco Noero’s booth at Paris+. Photo courtesy of the gallery.

You can tell when art dealers take genuine delight in assembling their stands. Meyer Riegger and Franco Noero—galleries in two different cities with complementary programs—definitely reveled in putting together their joint presentation at Paris+. Full of clever visual echoes and loosely based on the legacy of Surrealism, the display pairs historic material by the likes of Meret Oppenheim (whose works range from 100,000–300,000 CHF [$100,000—$300,000]) and Robert Mapplethorpe, with striking examples by living artists such as Sam Falls, Miriam Cahn, and Meuser. A tiny diptych by Cahn, a star of the most recent Venice Biennale, was affordably priced at just €7,000 ($6,900)—and didn’t last long. The female subject’s over-the-shoulder glance is mirrored by a striking Mappplethorpe photograph hung nearby. 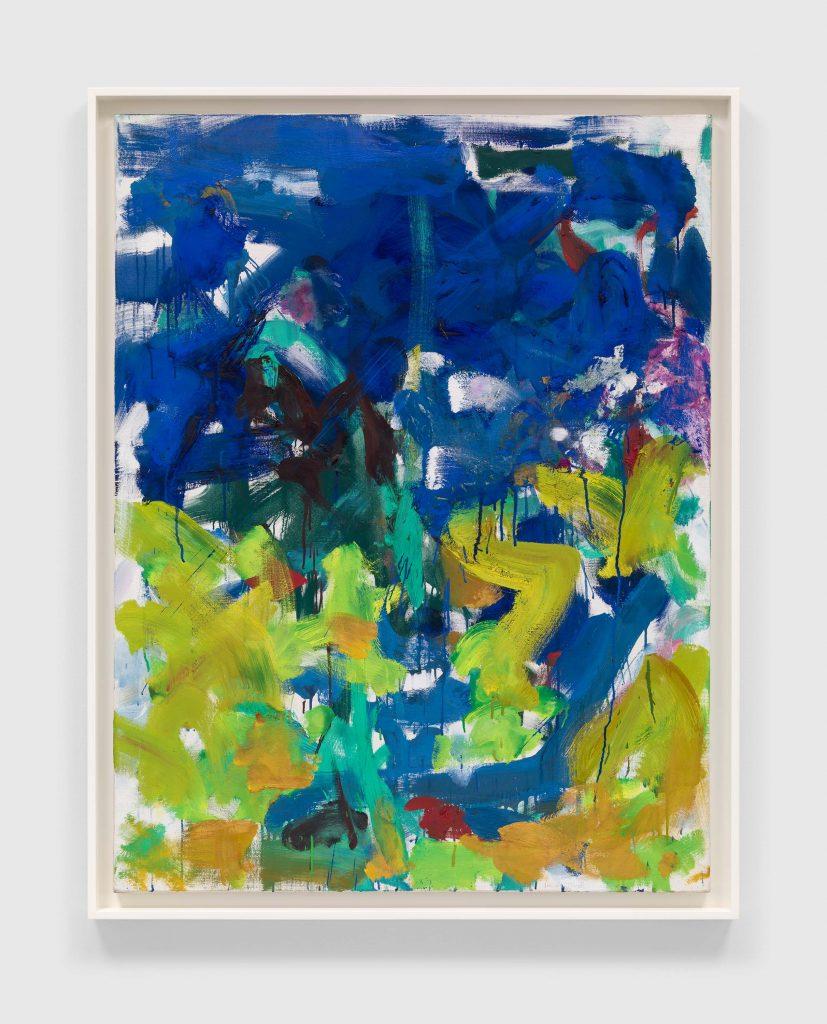 Is this booth surprising? No. But sometimes at an art fair, you just want to see exquisite things up close—and in an environment as dizzying as Paris+, David Zwirner has managed to create opportunities for intimate communion. There’s a richly textured blue and green Joan Mitchell (which sold for a price listed at $4.5 million), an achingly elegant Ruth Asawa hanging sculpture, and an entire room of early works by Robert Ryman, whose estate is now represented by the gallery. Only one of the pint-size paintings, made between 1958 and 1964, has ever been on public display before. 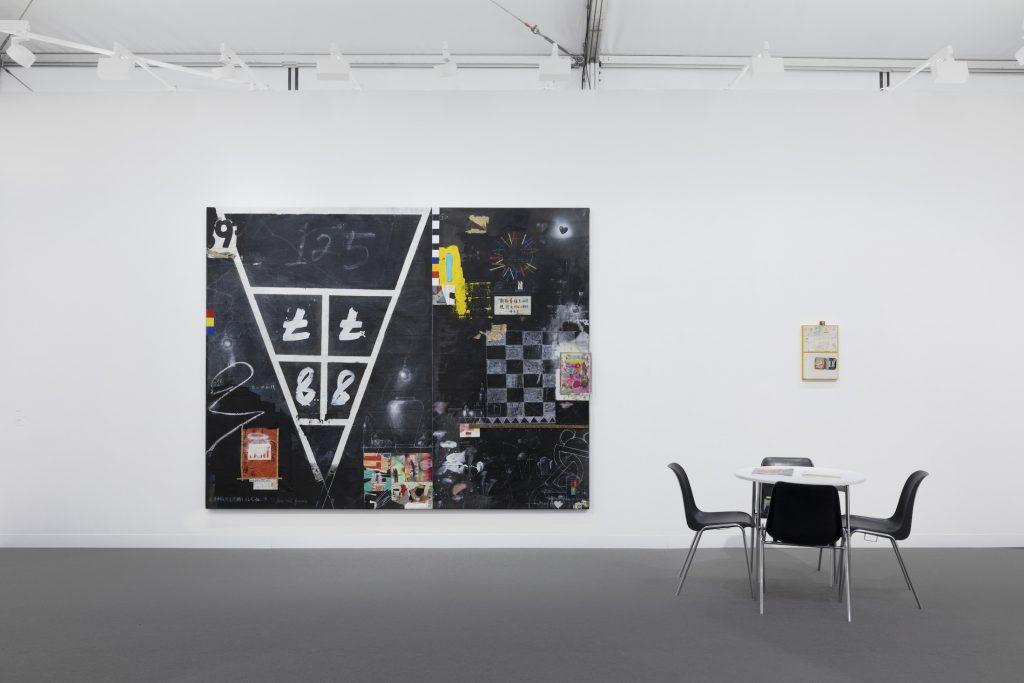 It’s often a good sign when a booth is full. It’s an even better sign when that stand is full of museum professionals. I was in good company at Andrew Kreps’s stand, where Melissa Chiu, the director of Washington, D.C.’s Hirshhorn Museum, and curator Beatrix Ruf congregated to take in the work of Raymond Saunders (b. 1934).

An American artist who had a studio in Paris until recently, Saunders creates elegant assemblages with materials from his daily life, often atop blackboard surfaces that reference his career as an educator. (He is also the author of the 1967 pamphlet “Black is a Color,” which questioned the art world’s fixation on identity-driven art.)

During the VIP preview, a number of works on the New York gallery’s stand sold, including the central blackboard painting, for prices ranging from $18,000 to around $400,000. 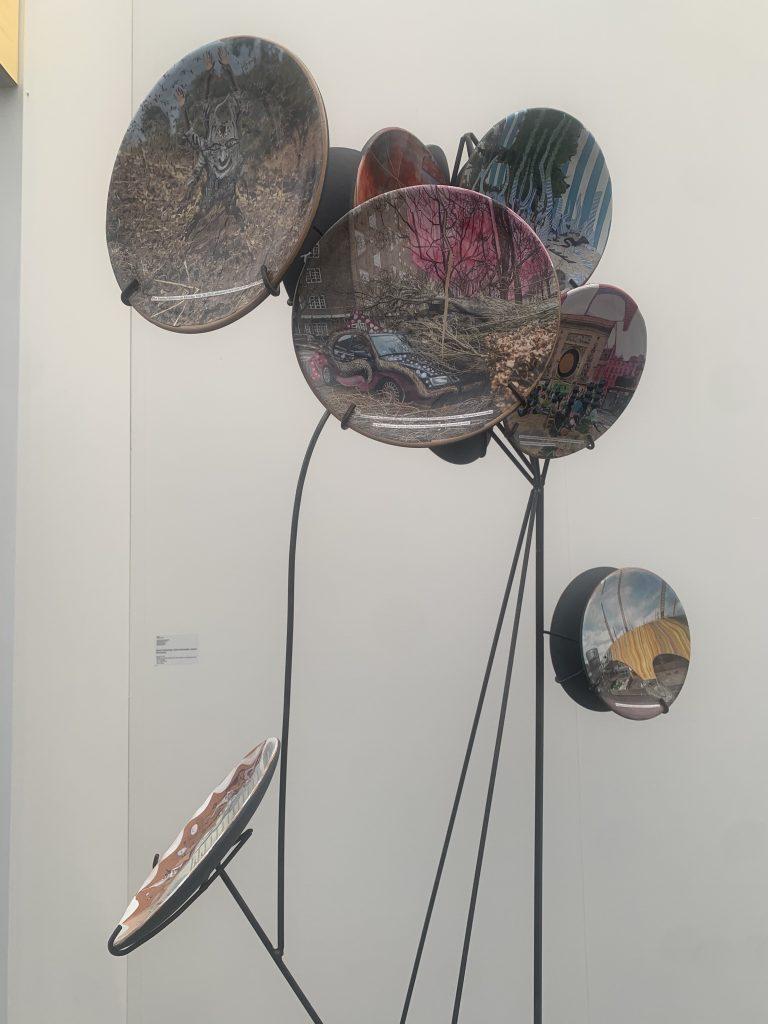 Some of the most memorable works on the stand of this taste-making French gallery are testaments to the power of collaboration. Iranian artist trio Ramin Haerizadeh, Rokni Haerizadeh and Hesam Rahmanian teamed up with the blacksmith Mohammed Rahis Mollah to create a sculpture out of terracotta produced in the Middle Eastern tradition. Painted with images drawn from news reports, they offer sometimes-dystopian views that rarely make it onto your typical dinner plate.

Meanwhile, an intricate tapestry by Duchamp Prize-winning duo Joana Hadjithomas and Khalil Joreige, created in collaboration with the TextileLab in the Netherlands, depicts images of archaeological sieves that were lost when the couple’s studio was destroyed in the Beirut Port explosion of 2020. “Tapestry to me is related to photography,” Joreige told Artnet News at the fair. “We wanted to keep renewing the way we were telling stories.” 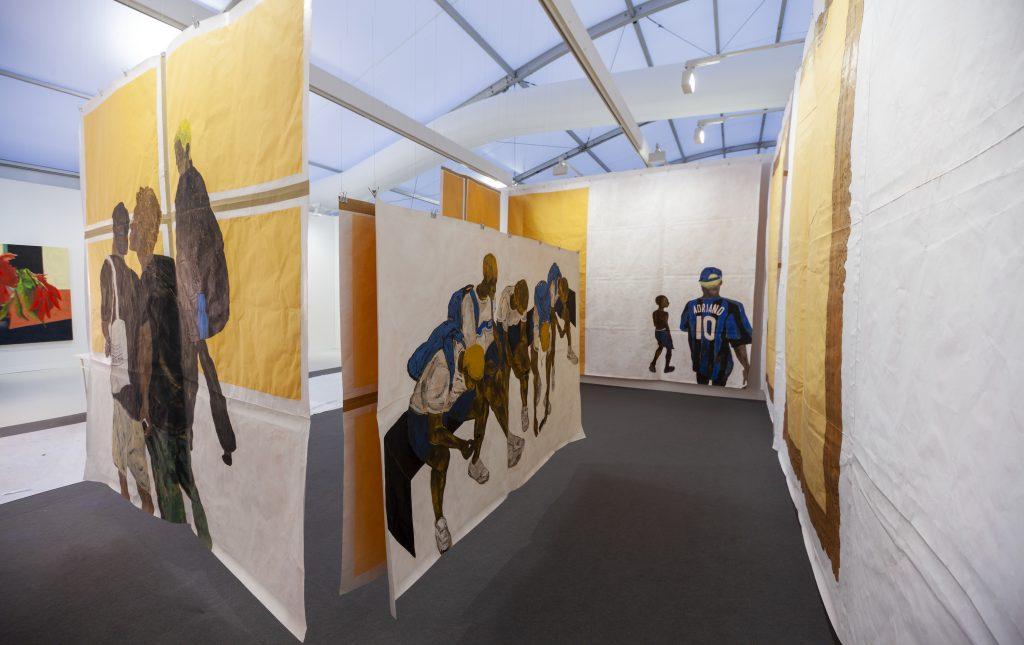 The Brazilian artist Maxwell Alexandre (b. 1990) has transformed A Gentil Carioca’s booth into a labyrinth of paintings on paper, depicting Black figures making their way through an imagined museum. Part of the artist’s “New Power” series, which was the subject of a recent solo exhibition at the Palais de Tokyo in Paris, the works position members of Alexandre’s Afro-Brazilian community inside the often-sterile white cube. With the figures cropped a cinematic way that sometimes feels as if they are really passing by, the installation is a successfully transporting experience, even within the confines of a small art-fair booth (which is, like the space pictured in this series, an often-sterile white cube). Most of the works had sold by the afternoon of the VIP preview, according to the gallery. 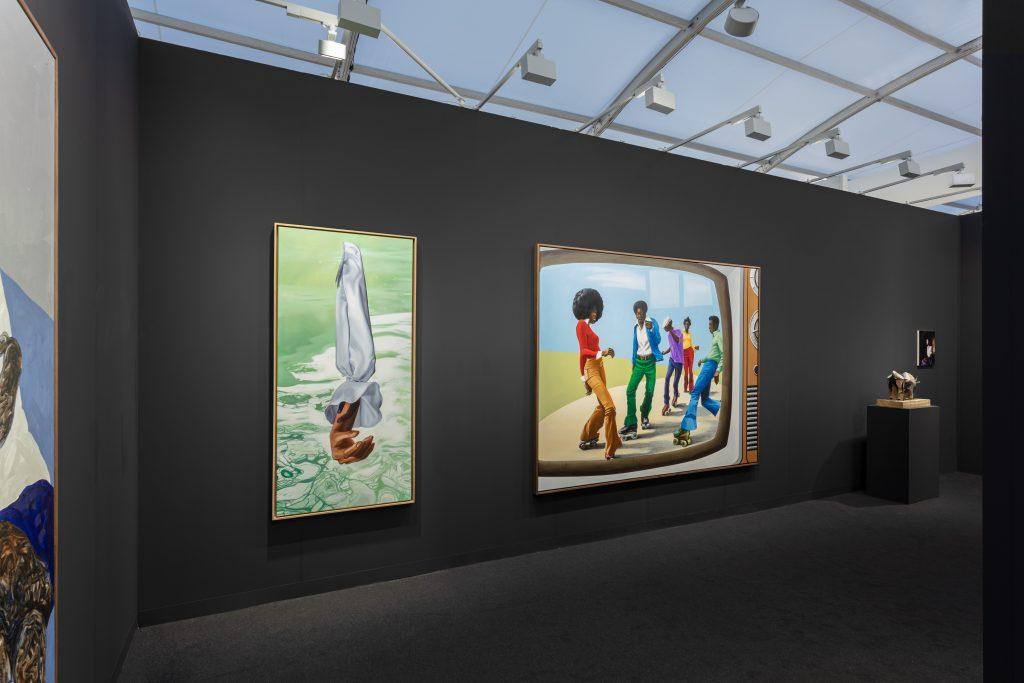 Mariane Ibrahim’s booth at Paris+, with Peter Uka’s work at center. Photo courtesy of the gallery.

After a long afternoon on your feet, sometimes you just want to reset your eyes with some really good painting. For that, Mariane Ibrahim gallery is the place to go. A darkly painted room that feels a bit hushed, its stand presents an all-star selection, from Amoako Boafo’s arresting double portrait (€375,000; $368,000) to Carmen Neely’s lyrical, graphite and oil abstractions (€35,000; $34,300). The showstopper is a large painting by Nigerian-born, Germany-based artist Peter Uka of bell-bottomed roller skaters on a television screen ($90,000). All the works on view were painted this year, and all had sold out by the end of the VIP preview, the gallery said.