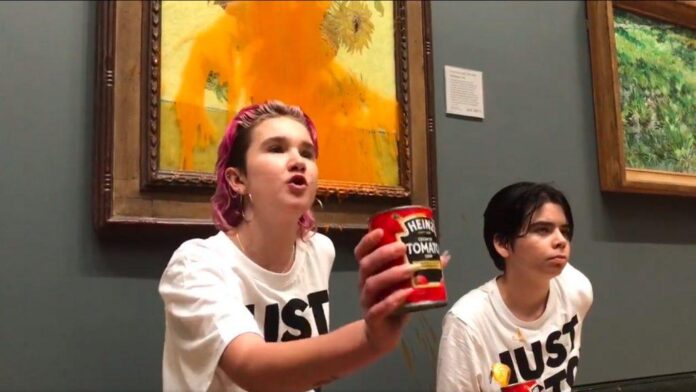 Taliban Government Approves Conservation of Afghanistan Synagogue – An early 20th century Jewish synagogue and bathhouse in Herat, Afghanistan, will undergo conservation work with official backing from the government. It is one of the first restorations projects being undertaken in the region. (The Art Newspaper)

Beware of ‘Pay for Play’ Galleries – Galleries that charge artists hundreds or even thousands of dollars to exhibit are becoming increasingly common in the U.K. Although the setup helps artists build out their CVs, some critics say the practice is predatory, misleading, and unethical—especially because sales are not guaranteed. ()

Climate Activists Divided Over Soup Strategy – Axios checked in with a variety of climate activists to see what they thought of Just Stop Oil’s string of demonstrations involving food (soup, mashed potatoes) and extremely famous and expensive works of art. “I’m not sure whether these actions are particularly effective because I’m not sure who the audience is,” Christina Limpert, a social scientist at SUNY College of Environmental Science and Forestry. ()

Poland Says Macron’s Gift to Pope May be Nazi-Looted – Poland’s foreign ministry is investigating whether a 1796 copy of Immanuel Kant’s gifted by French president Emmanuel Macron to Pope Francis on Monday was looted from Lviv by the Nazis during World War II. (ARTnews)

Henry Taylor’s Long Road to Stardom – As the painter prepares to open a solo show at the Museum of Contemporary Art, Los Angeles—his first retrospective in his hometown—he reflects on his rise to blue-chip status after decades spent working other jobs. As a psychiatric technician, he painted a number of his patients. (New York Times)

Maya Lin to Design Building at Bard College – The architect will design a 25,000-square-foot building to house studios for dance, orchestra, opera, and theater students. With a $42 million price tag, the project is scheduled to begin construction in fall 2023. (New York Times)

Sonia Boyce’s Venice Work Will Come to the U.K. – The Golden Lion Prize-winning installation of sculpture, video, collage, and music that debuted at the Venice Biennale’s British pavilion will land at the Margate-based Turner Contemporary in February 2023 before traveling to Leeds Art Gallery in May. (Guardian)

Monet/Mitchell Show Heads to the U.S. – In other traveling exhibition news, the Fondation Louis Vuitton blockbuster exploring the relationship between Claude Monet and Joan Mitchell will make its U.S. debut at the Saint Louis Art Museum next year. Twelve paintings by each artist will be on view in the show, which opens March 24. (Press release)

Lil Nas X Van Gogh Meme Goes Viral – While likely at the Los Angeles County Museum of Art (LACMA), where one of Warhol’s works is on display, the social media-savvy rapper poked fun at the Just Stop Oil protest that took place earlier this month at the National Gallery. ()

‘Everything has a price’: estate agent lists historic foundry that once cast Big Ben’s bells