Home News Out in the open: Michael Armitage on how the pandemic led him... 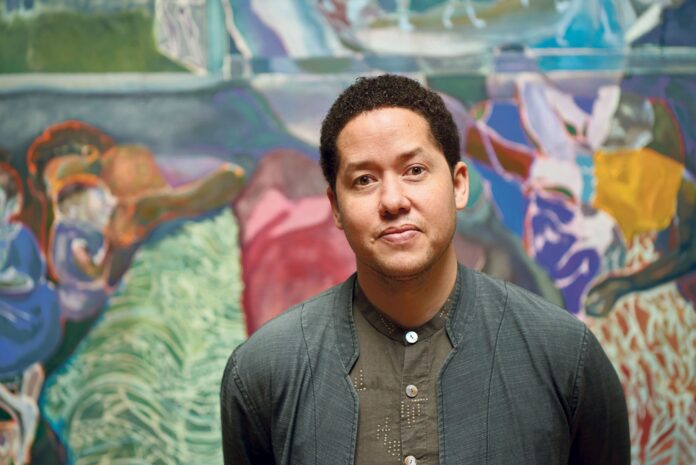 Michael Armitage was born in Kenya in 1984 to a Kikuyu mother and an English father and grew up in Nairobi. He studied at the Slade School of Fine Art and then at the Royal Academy Schools in London, from where he graduated in 2010. His vivid, multi-layered narrative paintings reflect these different influences, drawing on African myths and stories as well as contemporary East African art, European art history and contemporary news imagery. He mixes things up further by painting in oil on Lubugo bark cloth, a ceremonial material made in Uganda by the Baganda people. Armitage was included in the 2019 Venice Biennale, elected a Royal Academician in January 2022 and recently founded the Nairobi Contemporary Art Institute (NCAI) a non-profit visual arts space dedicated to contemporary East African art.

The Art Newspaper: Your Kunsthalle exhibition is your first in Switzerland and almost entirely consists of a new body of work.

Michael Armitage: Due to Covid I was moving between lockdowns in Nairobi and London and working on these paintings throughout this whole period, and the majority were finished last month. But this extended time in Nairobi gave me an opportunity to work en plein air, which I had been thinking about for a while but hadn’t been able to develop, and this resulted in most of the works in this show.

I’d been reflecting on how landscape has been represented by artists in Kenya, whether from the settler community or indigenous artists. When it came to the settler communities, there was often a relatively objective take, representing the landscape as a sort of observed note-taking. Whereas with artists from Kenya or East Africa, often the landscape was abstracted and internalised, so it almost became a character within the work. I took an experimental position of observing and directly reacting to the landscape whilst also thinking about these ways of abstraction and embedding historical and mythological narratives within a landscape. In this exhibition I’m also thinking about how different uses of perspective and layering can affect the psychological experience of being in front of a work, how it can pull you in or discourage you from entering.

You grew up in Nairobi and then went to art school in the UK, and this mixing of classic Western art history with East African contemporary art and traditions is a crucial component of your paintings.

I’ve always wanted to have narrative be a part of my work. I wish I could write and tell stories, but I can’t, so I wanted that to be a part of my practice and of my life. Growing up in Kenya and being exposed to the contemporary art scene there, and then going through that whole process of a BA at the Slade, and then my postgrad at the Royal Academy, was a slow awakening to this other world of art and painting and thinking in a broader sense. And it became clear that there was often something quite fundamental that artists were getting at, to do with human experience and how people relate to each other. That’s the same in all forms of art. There were the very different narratives that people were operating in, whether in a Western art history, or from Kenya and so on. But there were also these surprising links, which I found super interesting—the unexpected effect of artists on other artists from different parts of the world.

Your paintings are always made on Lubugo bark cloth, from southern Uganda. Why do you use this material?

I was looking for something that would locate my practice within the cultural context of East African history so that this shift in culture would be embedded in the work right from the beginning. I first came across the Lubugo in a tourist market, and then discovered that even though it was sold as this Kenyan tribal souvenir it was actually a Ugandan cloth. This seemed to run parallel to a lot of the cultural pressures and changes that can happen to a country as it evolves and develops. So the surface of the Lubugo worked both to locate and to subvert my practice. And because the surface itself is so irregular, it also shifted how I made the painting and opened up different ways of thinking around how I could use images. So it is something that continues to be really challenging but at the same time also very giving.

You are also showing some of the small ink works on paper that you first unveiled at the Venice Biennale. What is their relationship to the oil paintings?

I don’t really see them as work, in all honesty. They are literally just the pages out of my sketchbook. I never make them with the intention of others seeing them and Venice was the first time I showed them properly. I’m still a bit conflicted about it.

You, Who Are Still Alive is the title of the show—what lies behind this choice?

I wanted a title that would be quite open, so that it could take on the different narratives and experiences of the show. Whether talking to a time past through historical narratives and all the mythological stories, or talking to the present and more recent events, I wanted it to encapsulate the whole experience.

• Michael Armitage: You, Who Are Still Alive, Kunsthalle Basel, until 4 September