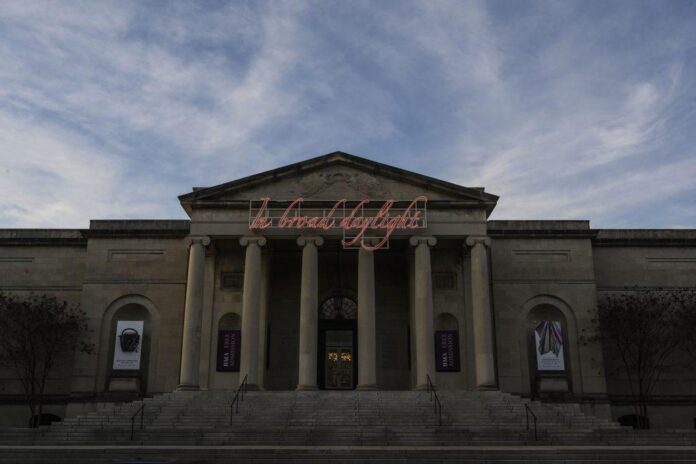 It was a painful decision when the Pennsylvania Academy of the Fine Arts sold its Edward Hopper painting. Not everyone on the board of trustees agreed with the decision, even if there was a broad consensus that the institution—as old as the United States—needed an update. Those changes would not come in the form of new galleries or an expensive remodel, but the beginning of a new acquisition fund aimed at diversifying PAFA’s collection with more works by women and people of color.

“I am a collector who has never sold anything,” said Anne McCollum, the museum’s chairwoman; she was there in 2013 when the board voted to proceed with the $40 million sale. “In that instance, we had a great strategic plan.” It ended up being a unanimous vote.

There were similar plans at the Baltimore Museum of Art during the pandemic: sell expensive works by Andy Warhol and others to expand the institution’s budgets. Only in this case, museum director Christopher Bedford was accused of going too far, declaring that funds would go toward acquiring more women and nonwhite artists while also funding some staff salaries.

That last part was controversial. Trustees resigned and two major donors threatened to rescind around $50 million in gifts, effectively nulling a sale that would have brought in just as much. Bedford resigned earlier this year and became the San Francisco Museum of Modern Art’s new leader.

Some remaining trustees at BMA worry about the shadow the controversy cast upon the museum, which has a history of allotting funds to improve the diversity of its holdings, though not one spanning as many decades as PAFA.

“The process to fully diversify a collection—to undo biases that have existed for decades and that still create challenges in the field—requires commitment through time,” said James Thornton, the BMA chairman. “It cannot be achieved in just a few years or with a single effort.”

Despite the backlash, PAFA and BMA have set a standard for diversifying museum collections. Interviews with curators and trustees provide a window into how progress was made, what funds were allocated, and why the numbers need to keep increasing before these institutions truly reflect the demographics of their communities.

Still, some museum experts believe that trustees should substantially increase their donations to the acquisition budget instead of asking curators to deaccession works. And the data suggests that while PAFA and BMA have devoted themselves to diversity, a deeper look into their approaches suggest a level of homogeneity among their picks. 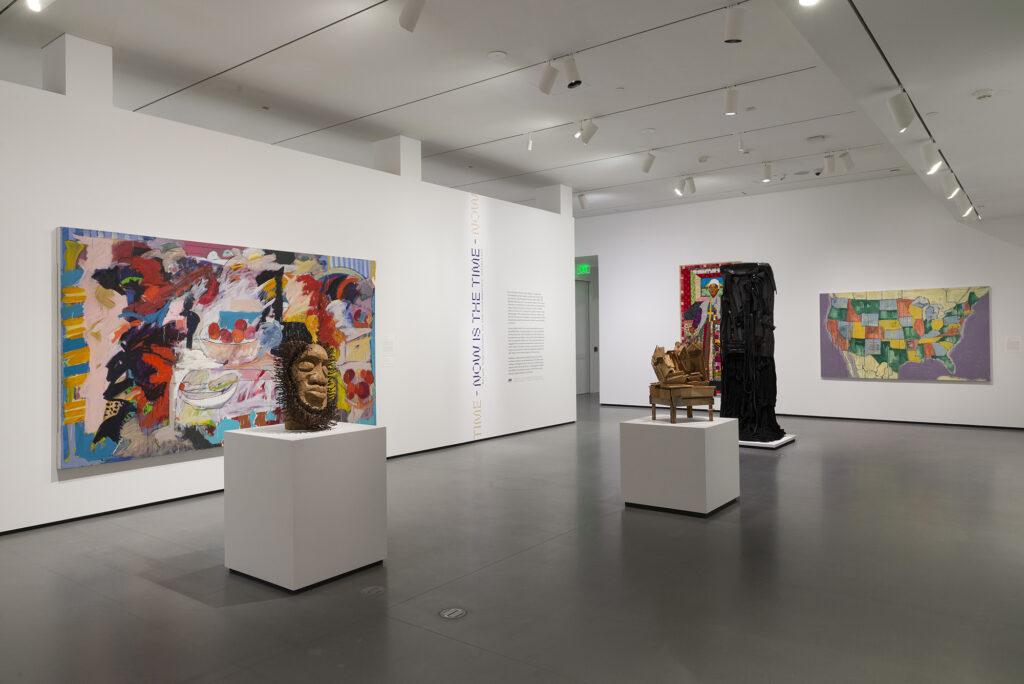 Installation view, “Now Is the Time: Recent Acquisitions to the Contemporary Collection” at the Baltimore Museum of Art, 2021.

The number of individual artists whose work entered these museums is much lower, however, with a significant amount of overlap in who gets acquired. For example, Louise Nevelson, Howardena Pindell, and Alison Saar are represented at both museums. The data set also reveals the heavy influence of single artists or groups. The Guerrilla Girls, an activist group that has pushed museums to diversify their holdings, makes up around 12 percent of BMA’s women acquisitions with 94 artworks. At PAFA, the collective is responsible for more than 6 percent of women acquisitions with 133 artworks.

The rising price of contemporary artworks has also turned curators into market hounds, whose jobs require them to anticipate collectors’ tastes and acquire work before the cost becomes prohibitively expensive. Those price hikes are also part of the reason why deaccessioning has become such an attractive strategy at some museums, allowing curators to raise funds without needing to ask trustees for more financial support. 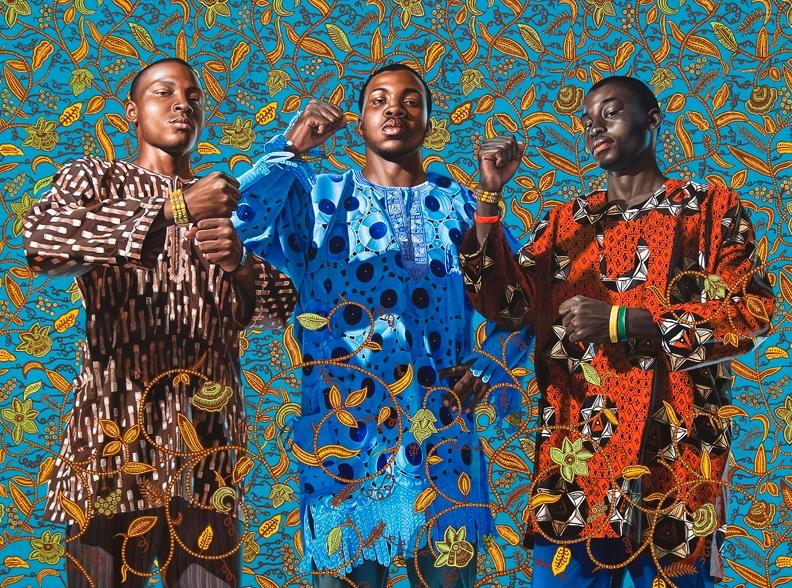 Predicting the market was already challenging in 2009, when curator Anne Marley joined PAFA. This was the same year that the museum acquired an artwork by Kehinde Wiley “before his market got out of reach,” she explained.

Now the institution’s chief curator, Marley says that she is proudest of the purchases that have anticipated sales records, for example, artworks by Ebony Patterson and Paul Chan. “We bought a major work by Ebony in 2018,” Marley said, explaining that she recently encountered another of Patterson’s works at the Armory Show in New York, where it was now thousands of dollars outside her price range.

Determining how much to spend is a simple calculation at PAFA, which annually spends about five percent of the income from the 2013 Hopper sale, which has been invested by the museum, on new purchases. That amounts to about $500,000, which is split between purchases of historic and contemporary art. (The total acquisition budget varies from year to year but is typically around $1 million.)

Acquisitions have recently slowed because most of the budget is now going toward supporting nearly a dozen commissions of living artists for an upcoming exhibition, “Rising Sun,” a joint effort with the African American Museum of Philadelphia scheduled to open at PAFA in March 2023. Those works, by artists including Shiva Ahmadi, Tiffany Chung, and Lenka Clayton, will be acquired by the museum after the show. There have also been 35 acquisitions this year, including works by Arcmanoro Niles, Ada Trillo, and Lee Krasner.

Marley believes that diversifying PAFA’s collection has helped diversify the institution’s staff, which had several openings during the pandemic after CEO David Brigham was criticized for the academy’s messaging around Black Lives Matter. It was around this time that staff that had played a vital role in the museum’s diversity efforts, director Brooke Davis Anderson and contemporary art curator Jodi Throckmorton, left the museum. 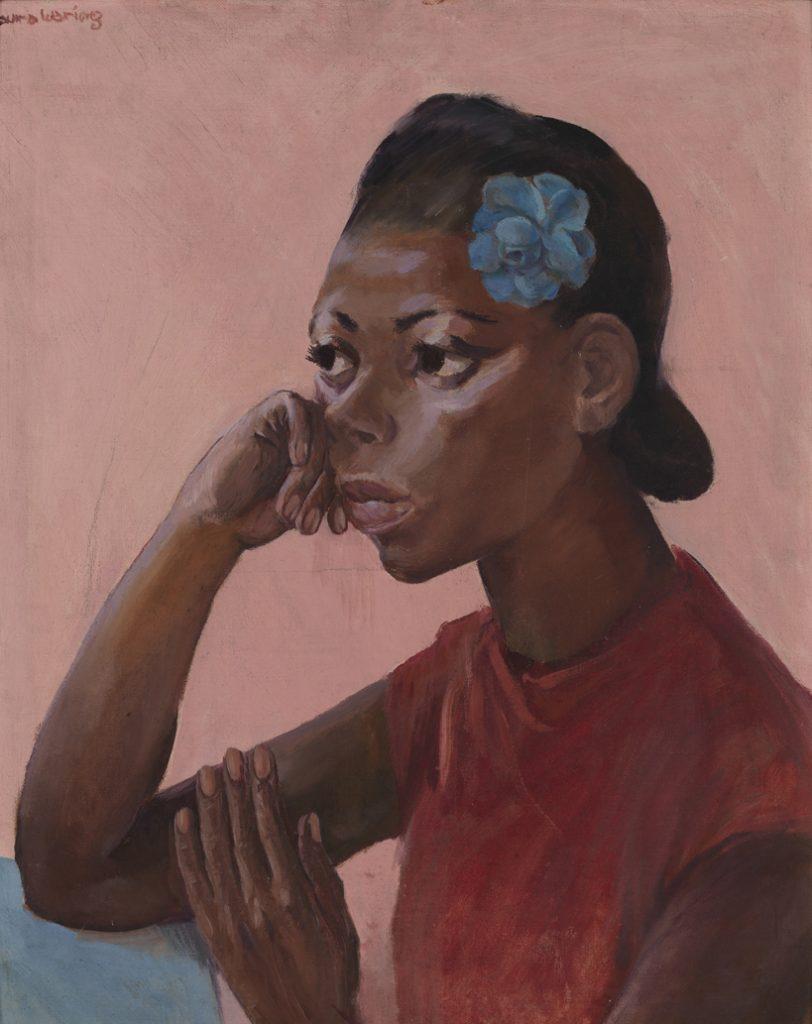 Laura Wheeler Waring, The Study of a Student (ca. 1940s)., featured in “Awakened in You”: The Collection of Dr. Constance E. Clayton. Courtesy of the Pennsylvania Academy of the Fine Arts.

“PAFA was one of the first schools to educate artists of color,” Pryor said, explaining how this history has encouraged collectors with their own diverse troves to donate to the institution. Recent acquisitions have included gifts of African American artworks from patrons Harold and Ann Sorgenti and the Connie Clayton collection, as well as women artists from the Linda Lee Alter collection.

“I don’t feel like it’s a token effort,” Pryor added. “For me to be in America’s oldest museum and art school is an opportunity to reshape the canon of American art.”

There is a similar cultural shift at the BMA, where employees are expecting their board to hire a director who understands the city’s population, which is two-thirds Black.

Through recent years, deaccessioning has helped the BMA grow its wish list. According to Asma Naeem, the museum’s interim co-director and chief curator, these funds help curators dream bigger. Four years after its 2018 deaccessions, which included works by Warhol and Rauschenberg, the museum has spent about 65 percent of its $16.1 million fund dedicated to art by women and artists of color.

Unlike PAFA, Baltimore does not typically allocate a targeted amount annually for acquisitions. “The funds available to spend for art acquisitions come from restricted contributions or restricted endowment funds,” Naeem said in an email. “We do not necessarily spend the amount drawn each year.”

Purchases with money from the deaccession have included Barbara Chase-Riboud’s Malcolm X #15 (2017) and new works by Mickalene Thomas and Leonardo Drew. BMA declined to specify how many works they had purchased with the funds. 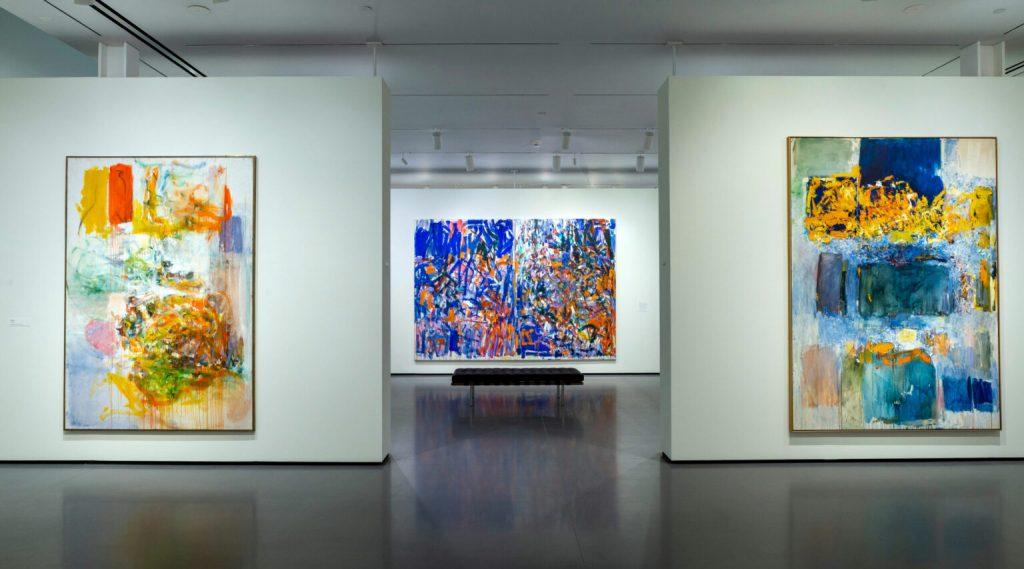 Installation view, “Joan Mitchell” at the Baltimore Museum of Art, 2022.

The BMA’s rollout of a 2020 women initiative, which coincided with a Joan Mitchell retrospective and the centennial of the 19th Amendment, was another watershed moment. The museum spent about $2.57 million from several funds, including the one established by the 2018 deaccession. Curators added 99 works to the collection by 69 female artists, including 40 who had not previously been represented at the institution.

“The acquisitions were made following standard processes with the curatorial team making recommendations, with an eye toward expanding the narratives that could be told within the collection,” Naeem explained.

However, the number of acquisitions for the museum’s year of women was noticeably smaller than in 2015 when 171 works by female artists entered the collection. A spokeswoman explained that the discrepancy came from the portfolio of 95 prints acquired from the Guerrilla Girls that year as well as a gift of 12 textiles by the artist Allegra Hicks.

Even with large financial investments in diversity, some museum experts see the demographic problems of collections as intractable.

“Museums would have to stop acquiring white male artists for centuries to level the playing field,” said Kelli Morgan, director of curatorial studies at Tufts University in Massachusetts. “And honestly, the arts ecosystem isn’t really set up for that.”

Morgan encourages a more expansive idea of judging diversity, not just based on acquisition numbers but on how museums research those artists and present their histories. 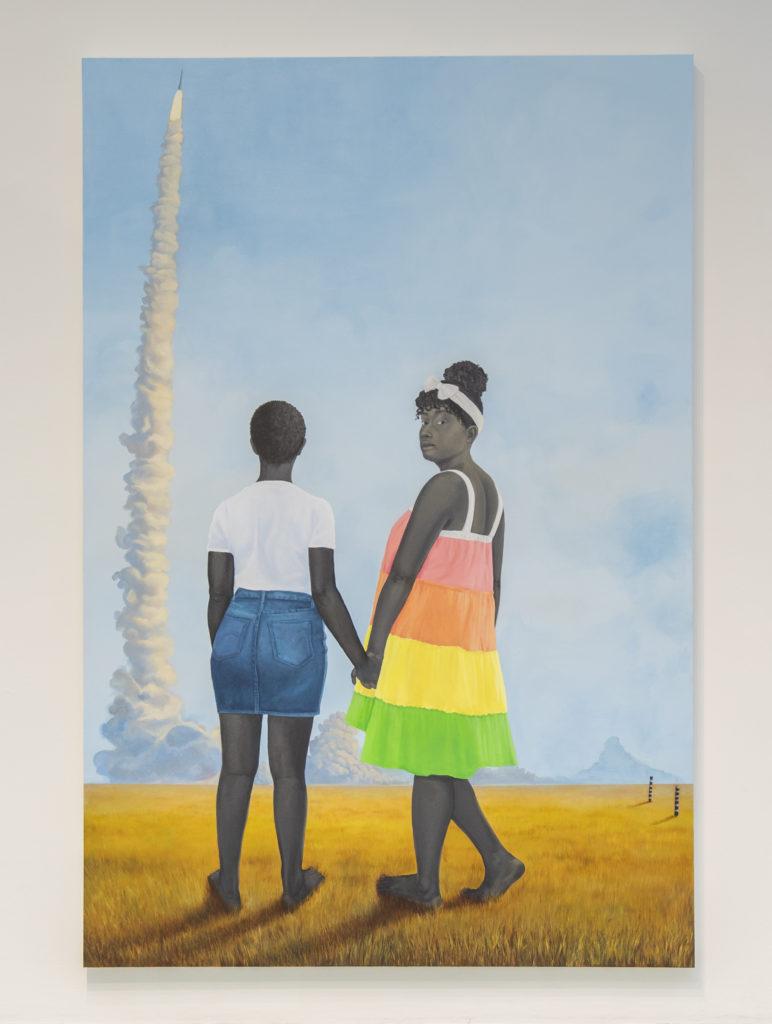 Amy Sherald’s Planes, rockets, and the spaces in between (2018). Courtesy of the Baltimore Museum of Art.

Morgan recalled being a curatorial fellow at PAFA, which started collecting art from its Black and female students in the 19th century. She found evidence that Black artists from that period were mistreated, and that their files in the museum archives were limited in comparison to white male artists in the collection

“We are dedicated to learning from the past and creating a new path forward,” said Pryor, PAFA’s director, in a statement. “Our exhibition practice—and the scholarship that accompanies it—shines a light on women artists and artists of color from our founding through today.”

Morgan applauds the efforts of institutions like PAFA and BMA, leaders in diversifying their acquisitions, but she is clear about the reality of change. “It really isn’t enough,” she said. “It’s like a band-aid on a bullet wound.”

17 Shows to See in Europe in 2023, From a Survey of Yayoi Kusama’s Inflatables to the Largest Showcase of Vermeer’s Work Yet