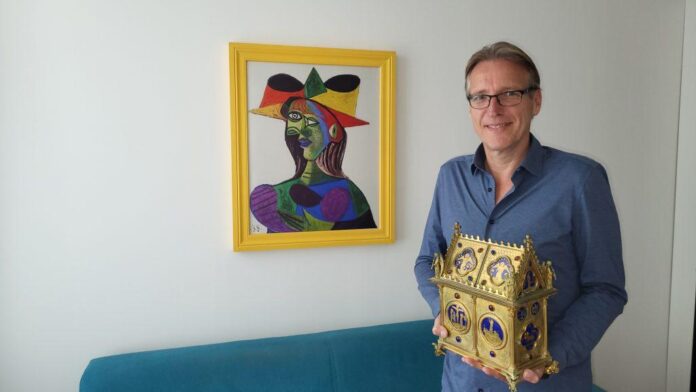 On the night of June 1, thieves made off with ancient relics held in Normandy’s Fécamp Abbey—including two vials said to hold the blood of Jesus Christ, collected in the Holy Grail during his crucifixion.

Historically, people prayed to these objects for their children to return home from the Crusades, and for their loved ones to recover from the plague. Whether the thieves knew it or not, they’d scooped an artifact that Catholics have made pilgrimages to see for the past 1,000 years. 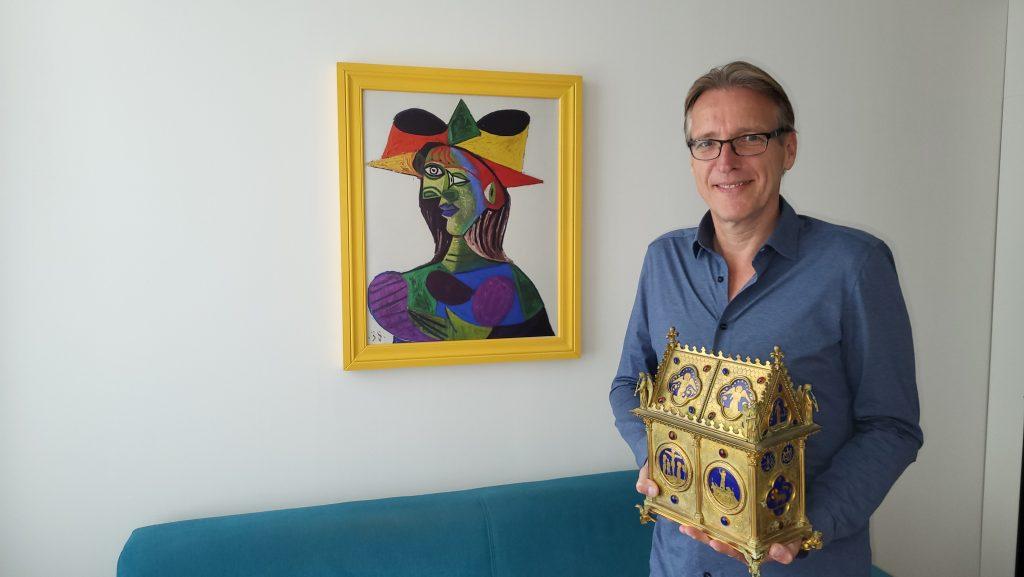 Brand holds a recovered relic before an image of Picasso’s painting of Dora Maar, which he also rescued in 2019. All photos courtesy of Arthur Brand.

Shortly after the theft, the 52-year-old art detective received an email from an anonymous writer claiming they had the precious loot in their possession.

Brand, who is well known in art recovery circles, has been dubbed the “Indiana Jones of the art world.” For his most recent case, in February, he helped return a Roman statue to France 50 years after it was stolen.

Bodily fluids aren’t usually in Brand’s purview, but the objects in question also included liturgical dishes and an ornate container about eleven inches high, “a heavily gilded copper box with encrusted precious stones and depictions of Christ on the cross and other saints,” according to the AFP. And, as a Catholic himself, Brand knew he had to take this one on. 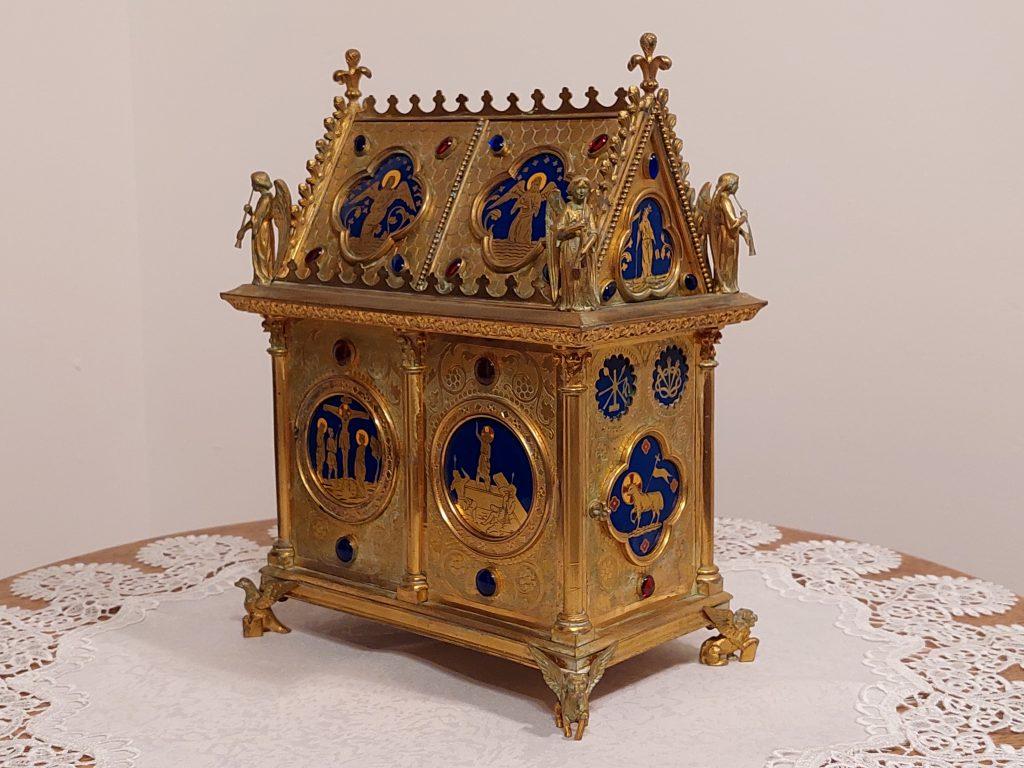 Closeup of the ornamental container.

“Most of the art we know is religious,” Brand told Artnet News. “It all started by the church and painters. The whole Renaissance and the Middle Ages, almost everything was religious, every piece of art.”

This case marked a full-circle moment for Brand, who learned his craft from art smuggler-turned-rescuer Michel van Rijn, watching as his mentor recovered the Gospel of Judas.

Churches often hold precious metals—and they’re often not well protected. That way “the faithful don’t have to feel like they’re in a prison,” Brand said, adding that “many of these churches don’t have enough money to put a good alarm system in.” 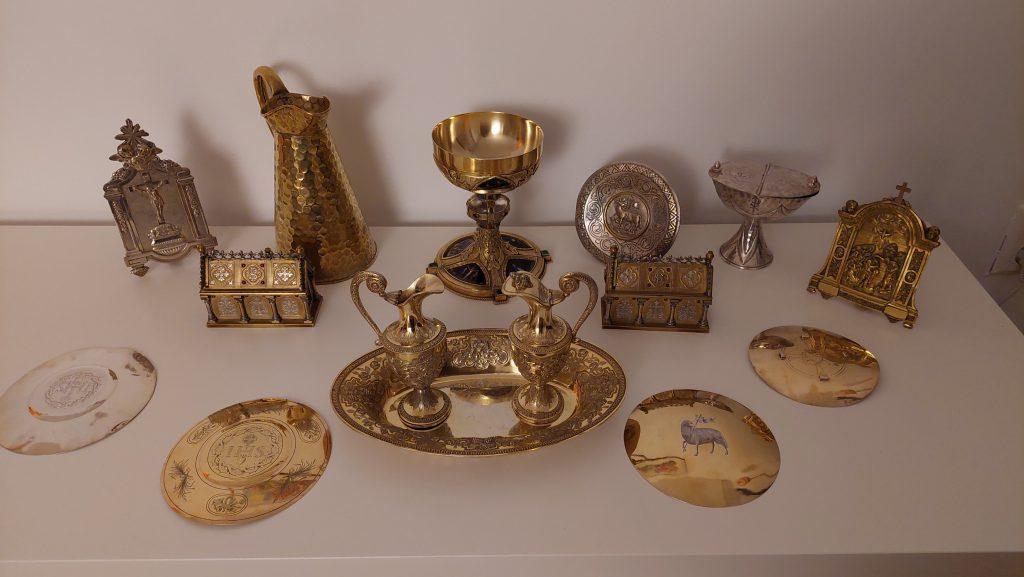 Brand guessed that once the Normandy thieves realized what they’d actually taken, they got spooked. It’s not only difficult to hawk loot from churches, it’s also really bad luck.

Next, he figured, the thieves stashed the goods at a friend’s house while deciding what to do. That friend wrote to Brand—in Dutch—that it was too risky to go to the abbey itself due to camera surveillance. If he couldn’t help them, they’d trash the stuff, they said.

“If you can do this for us, you can put this on your legacy,” the email ended.

Brand asked the anonymous sender to leave the holy relics on his doorstep in the Netherlands. He stayed home all week, waiting for the box to appear. He told other news outlets that he felt like a prisoner in his own home.

“On a Tuesday evening, the doorbell rang at 10:30,” Brand said. “I looked outside—I could see nobody, but I saw a box and I ran downstairs and there it was. Then I started to believe it was real.”

He’s since contacted the Dutch authorities, who will turn the relics over to the French police to give back to the abbey. In the meantime, Brand said he has been exercising even greater manners around the holy artifacts than normal. “I didn’t curse,” he said. “When I went from the shower to my bedroom, I put a towel around my body so I was not naked.”

And not just because he’s Catholic. Brand said he could feel the energy from the vials.

Enigmatic image of the bodily fluids themselves.

He did commit one necessary breach of respect though: Upon receiving the box, Brand took a peek to make sure everything was inside. Normally, only a Bishop would do that, but in this case the detective is confident he’ll be forgiven. The clergymen truly thought they’d never see these relics again.