Home News Three decades ago, US museums reported all the Native remains in their... 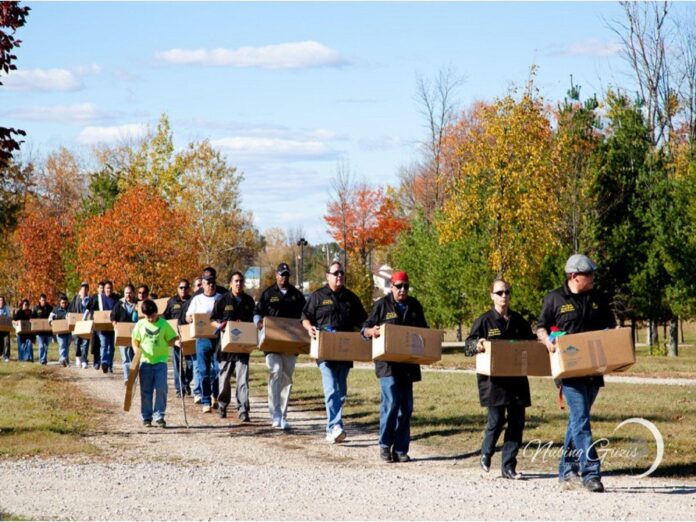 The inaugural Native American Heritage Month was first held in November 1990 to honour the country’s 574 federally-recognised tribes. It coincided with another major step forward for America’s Native people: the enactment of the Native American Graves Protection and Repatriation Act (NAGPRA), which requires institutions that receive government funds to report their holdings of Native human remains and burial objects. Ostensibly, the act is designed to facilitate repatriation. But, more than three decades later, the returning of human remains to rest in their ancestral homes remains a distressingly unreconciled issue.

The National Park Service (NPS), which oversees NAGPRA compliance, reports that American museums, universities and federal agencies have catalogued 208,698 entries since the law went into effect—but less than half of those holdings (48%) have been repatriated. A report published in September found that more than 108,000 entries remain pending and that nearly 95% of those are categorised as “not culturally affiliated”, or that sufficient evidence has not been provided to prove a tribe’s claims of ancestral association.

The “cultural affiliation” clause, one of several weaknesses of the NAGPRA legislation, requires tribes to provide often non-existent documentation, and excludes nearly 400 non-federally recognised tribes from submitting claims. After decades of protest, the government announced earlier this year that it would revise NAGPRA based on proposals from tribal leaders, with a final revision due to be published in January 2023.

“Key feedback from these consultations included increased transparency and reporting of holdings or collections. This is now reflected in the updated proposed revisions,” says David Barland-Liles, the NAGPRA civil penalties investigator.

Most of the pending entries in the NAGPRA database are held by university museums, which have long served as repositories for “ethnographic” collections. Among them is the University of North Dakota, which reported several compliance failures in September. It explained that its first holdings were brought by the anthropologist Henry Montgomery, who detailed his excavations of burial mounds in a 1906 paper, describing one mound that contained “a human skeleton, an earthenware urn, a shell scoop or spoon, a birch-bark basket, a turtle-shell” and other “utensils, ornaments and trinkets”. More Native holdings were brought to the university between the 1960s and the 1980s.

Remains found in a basement

The Spencer Museum of Art at the University of Kansas also announced that a collections manager had discovered, in a basement storage, around 930 human remains and funerary objects that had not been inventoried. And in August, the University of Alabama completed cataloguing more than 11,500 entries, the largest ever reported in a single notice.

The NPS announced its last NAGPRA-related grant in June 2020, distributing $1.9m to 12 tribes and 18 museums. This included the University of the Pacific in Stockton, California, which, in 2021, completed the repatriation of 1,500 skulls that had been collected by the orthodontist Spencer R. Atkinson for craniofacial research, and entered the museum in the 1960s. Another recipient was the Field Museum in Chicago, which in September announced it would repatriate nine sacred objects that were collected by the anthropologist John Hudson in the early 1900s.

The University of California, Berkeley, holds the largest number of pending entries in the NAGPRA database, spanning around 10,000 pieces.

As awareness around such problematic Native holdings has increased, US museums have tried to cast Indigenous artefacts in a more nuanced and non-ethnographic light.

The exhibition Grounded in Clay at the Museum of Indian Arts and Culture in Santa Fe (until 29 May 2023) showcases contemporary and ancient Pueblo ceramics, including several pieces that were looted and sold via auction houses and dealers. The pieces aim to convey the “complex NAGPRA issue and the historically poor relations between collectors and Native people”, says Brian D. Vallo, the governor of the Pueblo of Acoma, an adviser to the show.

The exhibition travels to the Metropolitan Museum of Art in New York (Met) next year, where it will be the second show held in the rotating gallery of the American wing—a space conceived after advisers “expressed concern about what some of our flagship museums and institutions were doing around the issues of repatriation and representation, and whether they were engaged in collaboration with Native people”, Vallo says.

The Met’s long-term exhibition Art of Native America: the Charles and Valerie Diker Collection, held in the American wing, drew ire from Native communities when it was unveiled in 2018 due to provenance concerns. Vallo, an adviser to the Met, “proposed a gallery within the wing could host temporary exhibitions.” A show of Pueblo ceramics “made sense because its history is rooted in the savage ethnographic collecting that happened in the early 1900s”, he said.

As a result of the criticism incited by the Diker collection, and as part of its commitment to the NAGPRA repatriation process, the Met has just completed a museum-wide inventory of Native works, and has acquired several Modern and contemporary works by Indigenous artists like Marie Watt (Seneca) and George Morrison (Grand Portage Band of Minnesota Chippewa). The initiatives have been overseen by Patricia Marroquin Norby (Purépecha), the Met’s first full-time curator of Native American art.

Norby is leading a new Native American Arts Initiative that includes a new advisory committee and new staff to focus on NAGPRA responsibilities. She has also organised the exhibition Water Memories (until 2 April 2023) that explores the relationship between Native and non-Native artists, using water as both a source of nourishment and sanctuary and protest and conflict, made in collaboration with Native artists and community members.

In January this year, the Brooklyn Public Library held the first-ever exhibition devoted to Lenape culture, organised by a member of the tribe. The artist and curator Joe Baker, the executive director of the nonprofit Lenape Center, says he was asked to consider “what we thought we could do to push back against this void of erasure of Lenape art and culture in the homeland, and decided on an exhibition; it was as simple and genuine and as that”.

A subsequent anthology devoted to Lenape art and culture—including essays by several historians, artists and tribal members—was published last month. “Anthropologists, archaeologists and non-Native scholars have really been the voice to describe and discuss our culture in the past, so this is the first authentic record of our history from the community perspective,” Baker says.